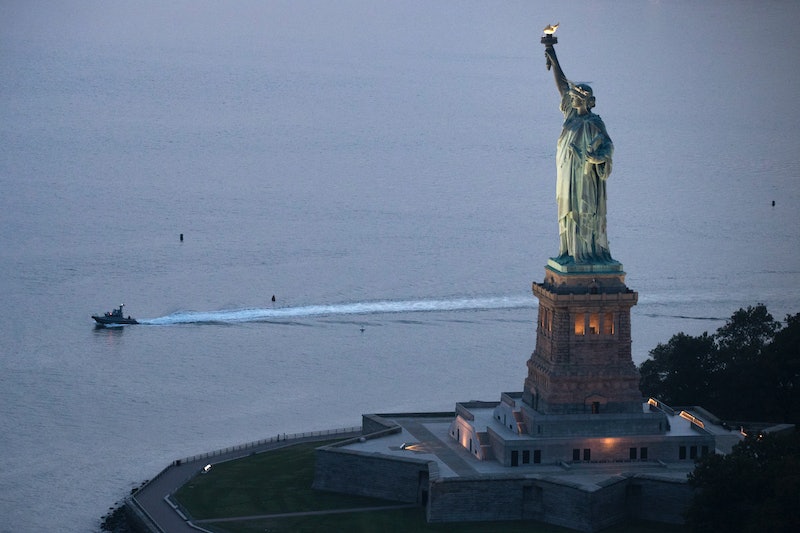 Protests continued at airports around the country Sunday in response to President Donald Trump's immigration and refugee ban. Welcomed to shouts of, "No hate, no fear, immigrants are welcome here," some travelers from the seven affected countries were reunited with their families — although lawyers claim others are still being held. In addition to protests, the judicial system was key in their release. Judicial rulings across the country demanded that the Department of Homeland Security not deport detained travelers. The Immigration and Nationality Act of 1965 could ensure these preliminary rulings stand and potentially even challenge the presumed legality of Trump's executive order.

That's essentially the argument made in The New York Times by a conservative immigration scholar from the Cato Institute — you know, that think tank one of the Koch brothers started. That in itself shows how the opposition to the seven country ban has united the country's entire political spectrum against the order. But as for the argument itself, David Bier points out that since 1965, discrimination based on national origin with regards to immigration has been banned. It was codified in, yep, the Immigration and Nationality Act of 1965, which is now 8 U.S. Code 1152:

No person shall receive any preference or priority or be discriminated against in the issuance of an immigrant visa because of the person’s race, sex, nationality, place of birth, or place of residence.

The law was passed after decades of discriminatory immigration policies, and aimed at making the United States' laws more just and equal, applying the same rules on any potential immigrant, no matter where they came from. Lyndon B. Johnson signed this into law as part of the Great Society, legislation which included the Civil Rights Act and the Voting Rights Act. It made things like family unification key to immigration policy, not where people came from.

Just over a decade prior, a different law was passed giving the president broad scope to keep out certain immigrants — probably due to fears of communist sympathizers during the Cold War. But that wasn't even the worst of it. Laws from the 19th century had banned Japanese, Chinese, and eventually all Asians from the country. Then, in 1924, a quota system was introduced that was partial to Western Europeans to the detriment of Eastern Europeans and, especially, people from Asia and Africa.

The Immigration and Nationality Act of 1965 changed all that. And now Trump will have to deal with it. He cannot unilaterally overturn an act of Congress, and thus his ban — which is based on national origin, a protected class — could face challenges in the courts.

Bier, the author of the Times op-ed, pointed out that this law only applies to immigrants — not to those seeking other types of visas. His other caveat is that it doesn't protect for discrimination based on religion. But as Trump keeps saying, this is not a full Muslim ban; it's just seven countries.

So the Trump Administration should get ready, because this could be grounds for a strong challenge.