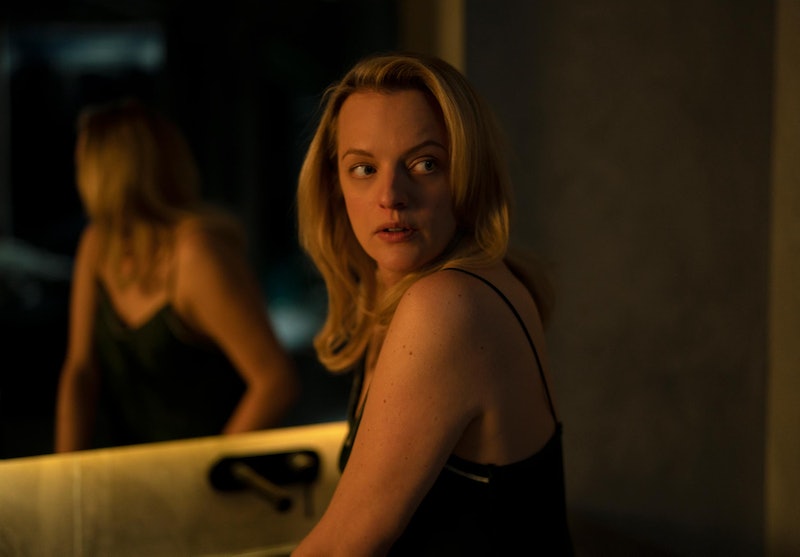 You've probably heard the title The Invisible Man before. Whether you've seen the 1933 classic monster movie or simply heard about the character through various childhood ghost stories, the invisible man is, like Dracula, Frankenstein, and the werewolf, one of the classic figures of the horror genre. But those other villlains are a bit more popular than the invisible man, in general, with more movie adaptations to their name. However, with a new movie version of The Invisible Man hitting theaters on Feb. 28, you might be wondering what The Invisible Man is based on.

The Invisible Man is a re-imagining of the book by science fiction master H.G. Wells. In this version, Elisabeth Moss stars as a young woman named Cecilia Kass who escapes an abusive relationship with Adrian Griffin (Oliver Jackson-Cohen) — a brilliant but controlling scientist — thanks to the help of her sister (Harriet Dyer), their childhood friend (Aldis Hodge), and his teenage daughter (Storm Reid). Adrian kills himself, claiming in a suicide note that he was distraught that she left him. But when mysterious things begin happening to her and the people she loves, Cecilia begins to suspect that Adrian has faked his own death, and is actually tormenting her by being invisible.

Reading the synopsis of Wells' novel, however, you'd be hard pressed to find the character of Cecilia or any character that she could be based on. That's because the film's writer and director, Leigh Whannell, went about telling the story in a completely different way. Though Wells' novel is told from the invisible man's point of view, this film has a woman at its center. A woman who is not only fighting for her life, but also fighting to be believed — which is a pretty powerful update in the wake of #MeToo.

Whannell's goal, he tells SyFy Wire, was to "approach the story from the point of view of the victim. Traditionally the Invisible Man story, the novel and the 1933 film, it's all about the scientist and he's the lead character and he's going insane and he's dealing with it....That's a great story but that's not what would make it scary for me. What would be scary would be to see the film through the eyes of the person being hunted by the Invisible Man and never knowing, 'Is he in the room right now? Is he here?'"

The result is a haunting portrayal of what it means to be a survivor, which is a more than necessary story in 2020.

More like this
Harry Lawtey Is Weighing Up The Price Of Success
By Olivia-Anne Cleary
These 25 International Horror Movies On Netflix Prove Fear Is A Universal Language
By Bustle Editors
Paul Mescal, Man Of Mystery
By Samantha Leach and Heather Hazzan
What’s New On Netflix: Ana De Armas’ 'Blonde' & A Nick Kroll Special
By Arya Roshanian
Get Even More From Bustle — Sign Up For The Newsletter