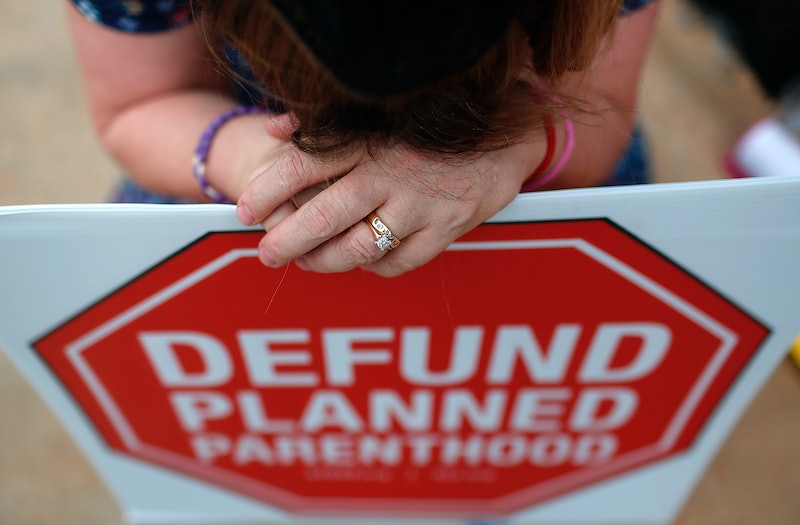 Thousands of activists will converge on Washington, D.C., to march on the National Mall today, but their aim is very different than most of the protesters who gathered just six days earlier for the Women's March. The Right to Life March in D.C. is the biggest gathering of pro-life activists in the country, with tens of thousands expected to be in attendance. Though it's frustrating to see people advocating against the freedoms that millions of women are working so hard to hold on to, the event and its participants deserve respect, even if their position doesn't.

The Right to Life March has taken place every year since 1974, on or near the anniversary of Roe v. Wade. Nellie Gray, the woman who first organized the march and led the pro-life movement for much of the late 20th century, was kind of awesome. She was a member of Women's Army Corps in World War II before attending Georgetown University, where she earned both her bachelor's and master's degree at a time when less than 5 percent of American women completed four years of college. After nearly 30 years at the State Department and Department of Labor, and earning her law degree too, Gray retired to dedicate her life to fighting against abortion. In a 2010 interview, Gray said her military service informed her view on abortion.

“After fighting against evil in World War II, I get very upset that we have Americans trying to justify abortion,” Gray told Catholic News Service. Though the pro-life movement itself is oppressive for women, at least it was largely directed by an intelligent and passionate woman who really believed in what she was doing.

The pro-life marchers may not have the same political beliefs as many of the protesters from the Women's March, but it's absolutely essential that they be respected just the same. Without equal respect in society, "the other side" will always have a leg to stand on by claiming it's a repressed social minority. Gray's story is a reminder of that need for reciprocity — on both sides of this issue, there are a lot of women respecting women and trying to help them out in the way they think is best. Though reproductive rights advocates have a fundamentally different view on abortion than pro-life activists, they're all just trying to make the world a better place and getting hung up on how to do it.

It's inspiring to see thousands of people peacefully take to the streets for a cause they believe in, even if you don't agree with their position. The pro-life marchers are doing what they truly think is best for society and individuals, so respecting their belief in that is a great way to legitimize the people without legitimizing their position. Of course, that doesn't mean that people should stop advocating or mobilizing for women's reproductive freedom, only that everyone needs to remember that "the other side" is also human. People come from different experiences that inform their world-views in drastically different ways, and respecting that difference is the only way that Americans will ever be able to meet in the middle.