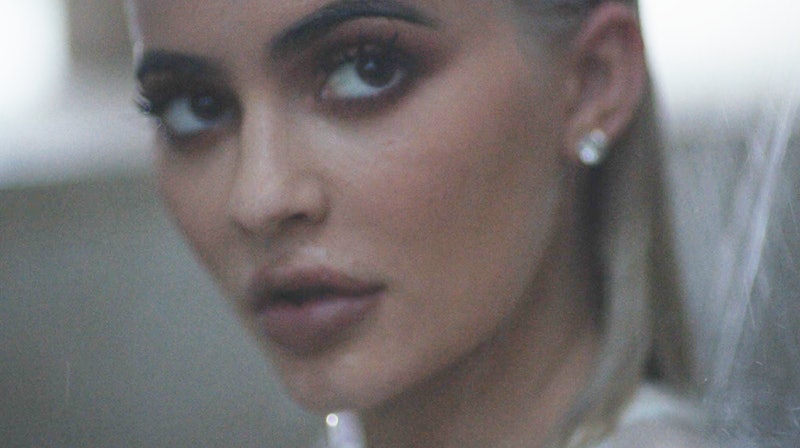 Kylie promised a surprise gift to the world, and she delivered. On Christmas day, a video of Kylie and Tyga having a romantic time in the shower was released at W Magazine. The video is pretty risqué and perfectly soundtracked; the song Kylie and Tyga are hooking up to to is Niia's simple and sexy "Last Night in Los Feliz."

The video was shot and directed by photographer Sasha Samsonova, who has frequently collaborated with Kylie in past photoshoots and videos. While "Last Night in Los Feliz" soundtracks it, the video doesn't appear to be an advertisement or music video; instead, it was a spontaneous shoot made for the fun of it. Here's how Samsonova described the making of the video to W Magazine:

It fell into place very, very naturally. It just happened. The whole deal with this video is that it’s a very personal experience. It’s like you’re watching this person from a point of view that has never been seen before.

He went on to describe the video as "raw," noting that there was no post-production or retouching. In the short film, Kylie takes a shower, wearing nothing but a white t-shirt, smoking a cigarette and lounging around before Tyga joins her under the water, similarly dressed (though they eventually end up topless). The video was reportedly shot at a secret "oasis" in Venice, California, where Samsonova and Jenner spent the day shooting.

It's not the first time that Kylie and Tyga have appeared in a risqué music video together. Tyga's "Stimulated" music video officially confirmed them as a couple, and they've since appeared together in Alexander Wang ads and "Thriller"-inspired music videos. Their shoots have generated controversy before, and this most recent video might be their steamiest yet, both literally and figuratively.

The short film definitely serves as a provocative advertisement for "Last Night In Los Feliz," which Niia released in early December of 2016. For those who aren't familiar with the singer/songwriter, she first came to prominence when she was featured on the 2007 Wyclef Jean song "Sweetest Girl (Dollar Bill)." She released her debut EP, Generation Blue, in 2014 and recently released two new singles in 2016, "Bored to Death" and "Last Night In Los Feliz."

Whether these will be featured on Niia's debut album remains unclear, but it's likely that Jenner fans will be clamoring for more after watching her new video.

More like this
Kim Kardashian & Kylie Jenner Squabble Over Skims On Instagram
By Alyssa Lapid
Kylie Jenner Clarified How To Pronounce Her Son's New Name
By Jake Viswanath
Kylie Jenner's Giant Lion Head Outfit Has A Deeper Meaning
By El Hunt
Kylie Jenner Rocked A Very Kim Kardashian-Esque Outfit At Couture Week
By Allie Fasanella
Get Even More From Bustle — Sign Up For The Newsletter
From hair trends to relationship advice, our daily newsletter has everything you need to sound like a person who’s on TikTok, even if you aren’t.