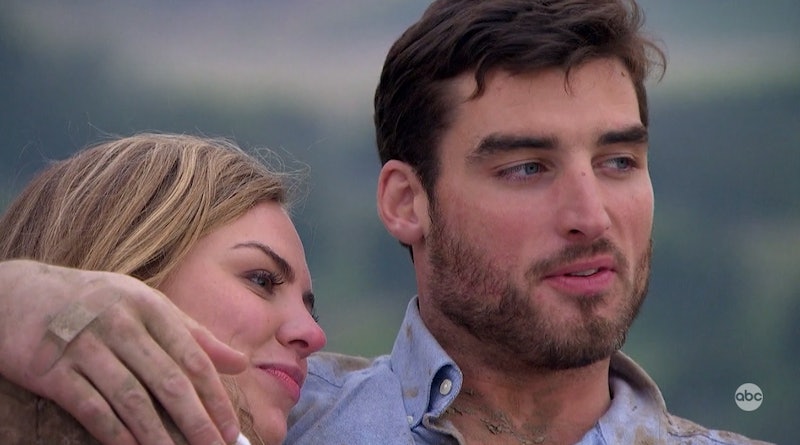 Tyler G. snagged the coveted first one-on-one date this season of The Bachelorette — an occasion particularly near and dear to Hannah's heart, given that she had her Bachelor season's first one-on-one with Colton. From the helicopter ride to the "tell me your hopes and dreams" conversation, the whole date was straight out of the Bachelor Nation playbook — and Hannah seemed totally taken with Tyler by the end. Could this mean that after The Bachelorette, it's Tyler G. who ends up with the finale rose?

Right now, it's way too early to tell. A first date can only tell us so much about his and Hannah's journey, and while plenty of fans are hoping that Tyler G. and his midnight blue eyes stick around a while longer, all's fair in love and rose ceremonies — and currently, no one is safe. In the meantime, fans can take a peek at Tyler G.'s social media for any clues as to how his time on the show will play out, though the (ex?) psych student has been keeping his posting to a minimum. One thing is clear: Tyler G. is very excited about his Bachelorette experience (maybe because he gets a fiancée out of it?!) and wants the whole world to know. Case in point: his last five posts on Instagram (and his only posts for 2019) are all about the show.

The first in this line of posts is from May 13, and includes this caption: "What are you doing at 8/7c tonight?! Tune into ABC for the @bacheloretteabc to see me suck at television. Or don't, whatever works. But @alabamahannah will be there and she's worth watching for sure." It's a good caption by any standard: it shows he's not afraid to make fun of himself, and also that he still feels positively toward Hannah. Could this point to them still being together? Let's keep digging.

The next post is from last week, and includes another clever, self-deprecating caption, in case his extreme handsomeness gets misread for cockiness. "When you realize Monday is your new favorite day of the week," it reads, followed by a rose emoji and the tag "areyousickoftheroseemojiyet." This picture is the only one not taken directly from the show, and is tagged at a Boca Raton steakhouse called Abe & Louie's. If Tyler is in fact back in Boca Raton following Bachelorette filming, that could either mean he doesn't make it to the end, or that he's just catching up with family and friends after time away. It could even mean that Hannah is there with him getting to know his life in Florida — after all, Rachel moved to Florida for Bryan. Anything is possible.

A final possibility we have to consider, however, is that Tyler isn't in Florida at all, and just posted some months-old pic because he looks good in it. Who among us is not guilty of a latergram for this reason? It sure makes internet stalking harder, but we'll let it slide just this once.

Tyler G.'s last two posts are pretty straightforward promotional content, both stills taken from his one-on-one date. The caption for this one reads: "finally caught up to her. what'd you guys think of last nights episode??" It seems like he's getting the hang of being an Instagram personality, and is following several cardinal rules of influencer content with this and his last few posts. Post several times a week? Check. Only include high-quality photos? Check. Ask a question (or tease new content) in your caption to increase engagement? Check.

Maybe that's a cynical read, and he's including so much content from the show because he's bursting with excitement about how his love story with current fiancée Hannah began. But judging from the (non-existent) real-life content posted on Tyler G.'s social media, and the fact that he seems very engaged with the show as it airs now, it seems like Tyler's run on The Bachelorette had a significant impact on his life. Either he's still currently entangled with the franchise in some way (whether that's a relationship with Hannah, or an invite to Bachelor In Paradise), or he's hoping to parlay his time on the show into a profitable Instagram following (don't hate the player, hate the game).

So far, all we know about Tyler G. is that he's handsome, has some genuinely interesting work experience, and seems to share Hannah's (vague) goals and ideals about the future. Whether that continues to be true, we'll have to keep watching to find out.