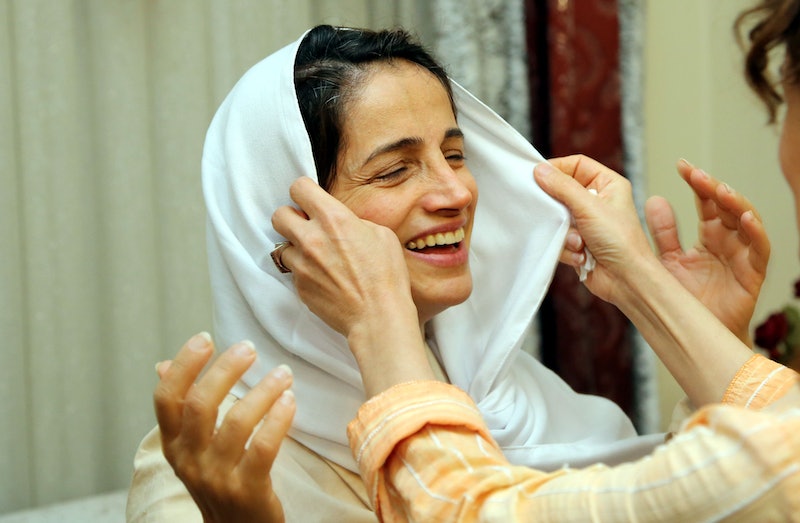 Last week protestors surrounded the Iranian Embassy in London, as part of the #WhiteWednesdays Movement. For the last few years Iranian women have been posting pictures of themselves on Wednesdays in white headscarves or white clothing to protest laws which force women in Iran to cover their hair.

The protest outside the embassy was organised by International Observatory of Human Rights (IOHR), and it saw the building surrounded by a white veil, the symbol behind #WhiteWednsdays. Campaigners also had signs and T-shirts sporting the slogan "free unjustly jailed," and "stop compulsory hijab in Iran," as well as images of the faces of Iranian women who have been arrested for unveiling.

According to The Guardian, the protest called for the release of international humans rights lawyer Nasrin Sotoudeh, who was sentenced to prison in Iran for 38 years with 148 lashes. Prior to her arrest, she was representing various women in Iran who were arrested for not wearing the mandatory headscarves in public. The Guardian reports she was arrested last June for, "spying, spreading propaganda and insulting Iran’s supreme leader."

Human rights charity Amnesty International has created a petition calling for Sotoudeh to be freed saying, "Women should be able to choose what they wear, and lawyers should be able to defend their right to do so. This is the harshest sentence recorded against a human rights defender in Iran in recent years."

The #WhiteWednesdays movement was started back in 2017 by Iranian journalist and activist Masih Alinejad. It sees women protest in public without covering their hair for the right to choose what they wear. In an interview with, to the BBC about Iranian women and their agency Alinejad said "[they] are taking the lead themselves, they don't need me, they just needed a platform... and I provided them with that." Alinejad has been living in self-imposed exile since 2009 for fear she will be arrested if she returns to Iran.

In a video posted on Twitter, Alinejad recently condemned Western women for wearing headscarves in Iran instead of fighting against the compulsory hijab laws.

"When they come to my beautiful country, they say it's a cultural issue and 'we wear it out of respect to the culture of Iran,'" she said. "Let me be clear with you, calling a discriminatory law as part of our culture, this is an insult to our nation."

#WhiteWednesdays isn't the first movement started by Alinejad. She also created the online movement My Stealthy Freedom, where predominantly Iranian women share photos of themselves with their hair uncovered. Speaking to the Financial Times about growing up under these modesty laws, Alinejad said," Girls were fully covered from top to toe and we were told that if you showed your hair, you would be hung by it in hell. We were brought up with such religious guilt."

As the BBC reports, prior to the Islamic revolution, women could wear what they wanted in Iran including Western-style clothing. Then in 1979 when Ayatollah Khomeini came into power women had to wear the veil by law.

As The Telegraph notes, there is a long history of feminist movements in Iran. #WhiteWednesdays is one more movement started by Iranian women, for Iranian women that is still pushing forward in the fight for equality.

More like this
Will Archie & Lilibet Attend The Queen's Funeral?
By Sam Ramsden
Women Around The World Are Cutting Their Hair In Solidarity With Mahsa Amini
By Darshita Goyal
The Queen’s Cause Of Death May Not Be Formally Announced
By Shahed Ezaydi and Catharina Cheung
New Coins Unveiled As King Charles III's Reign Gets Underway
By Sam Ramsden
Get The Very Best Of Bustle/UK