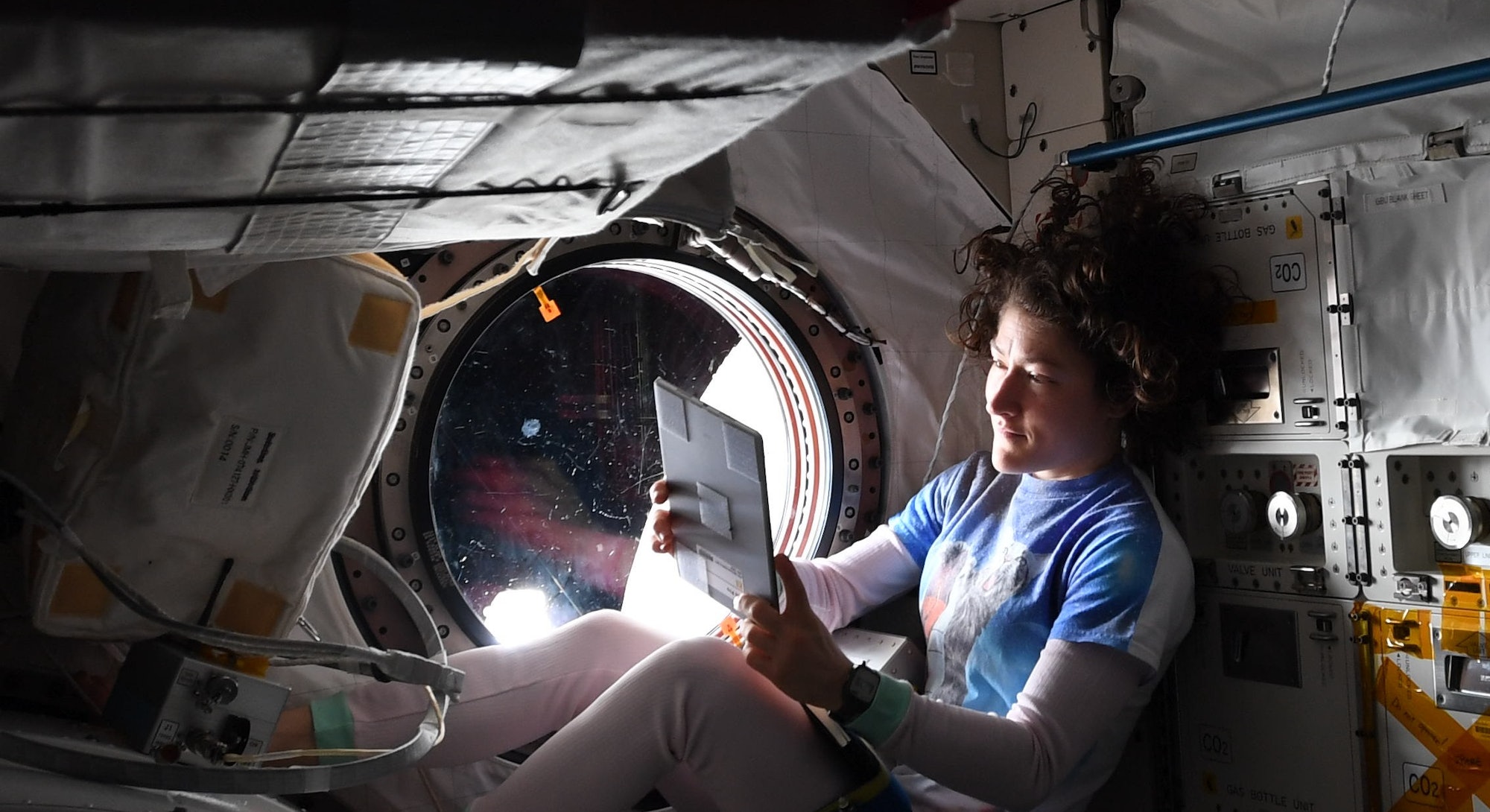 Bustle’s Be My Guest series takes you inside extraordinary homes around the world, and in rare cases, beyond. For Bustle’s Rule Breakers issue, we asked Christina Koch, a NASA astronaut living onboard the International Space Station, to tell us what life's really like for her up in space. She did us one better and sent photos.

Like so many of us, Christina Koch was looking for one thing when she first moved into her new digs five months ago — more space.

She got exactly that.

Sure, her "bedroom" is roughly the size of a phone booth, and she has to share everything with the five grown men she currently calls roommates. But for Koch, a NASA astronaut and flight engineer who lives on board the International Space Station, it's the small price she's willing to pay for views that are, quite literally, out of this world.

"We have this gorgeous window — I call it the bay window of the space station," Koch says, calling in to Bustle's New York City headquarters from her orbit 250 miles above Earth. "It's in the module that we call the Cupola, and it faces the Earth, and it is the place where you can get phenomenal views, not only of the Earth as it races by below us, but of the night sky, the planets, the moon, auroras, the Southern lights on the Earth's atmosphere."

Getting Koch on the line for an interview is a feat that takes a team of producers — both of the Bustle and NASA variety — weeks to accomplish. When the call comes through to a tiny box set up in a Bustle conference room, there's not a single bit of static — Koch's voice rings out as if she's standing there next to us. A NASA video recording of the interview from Koch's point of view will later show that she is, in fact, untethered by gravity, bobbing lightly up and down in place while somehow managing to stay perfectly upright. At least three visible laptop computers crowd the frame. She holds on to a microphone, her curly hair floating out behind her. A string of flags representing different nations hangs in the background. "We have you loud and clear onboard the International Space Station," Koch says into her mic. "Welcome aboard."

Koch, 40, first entered the ISS on March 14, 2019 at 10:07 p.m. CT, as it hovered 254 miles over Bulgaria. There's video to mark the occasion — you can watch Koch, NASA astronaut Nick Hague, and Russian cosmonaut Alexey Ovchinin come in through the station's hatch, smiles huge as they greet the rest of their team already on board. There's a lot of hugging, a lot of floating. (This is a microgravity environment we're talking about, after all.) While most astronauts live on board the ISS for around six months, NASA revealed in April, Koch would stay through February 2020, meaning her spaceflight will soon be the longest one ever completed by a woman in ISS history. By the time Koch's expeditions are complete, she will have lived in space for 328 consecutive days.

"We're to the point now where we don't even notice or think it's strange that we float around."

Spanning 357 feet in length (that's nearly the size of a football field, if you count the end zones), the International Space Station orbits the Earth 16 times during a 24-hour period, making a full orbit every 90 minutes or so, traveling at a speed of 5 miles per second. According to NASA, it contains six crew quarters and two bathrooms, plus a gym where astronauts exercise two hours a day to maintain muscle and bone mass. (A harness keeps people from physically flying off the treadmill.) For some, that might seem like a lot to get used to. And yet, Koch says, it didn't take long for the space station — in all of its bizarre, nearly gravity-free glory — to feel like home. "We're to the point now where we don't even notice or think it's strange that we float around," Koch says. "In fact, when I watch television shows of, obviously, people on Earth, I actually find myself being surprised that things aren't floating. Just how quickly the mind can adapt is really amazing."

What I find surprising is that Koch watches TV up in space, but as she explains, even astronauts need to chill. Her daily responsibilities — performing station maintenance, testing out new technologies, investigating microgravity's effect on the human body — keep her pretty busy. Throw in the occasional spacewalk, and it's clear that Koch and her crewmates deserve weekends off just like the rest of us. "We have group meals together, we watch movies together, play music together, and just share stories about our lives," she says. "We also are really lucky that we have a chance to communicate with our friends and family at home. On the weekends in particular, we usually have one video conference per week with, say, a spouse or our kids or something like that."

Meals become a particularly exciting event, Koch says, when a visiting cargo vehicle happens to drop off fresh fruit, vegetables, and on occasion, garlic. "Garlic is one of the things we always request," she says, though without gravity to keep everything in place, preparing it becomes its own adventure. "It just takes some upside-down tape to put the garlic peels on as we go, so they don't go flying off, and a little bit of care in cutting up the garlic," she says. "Then we use little pouches to put the garlic in what we call our food warmer, which is normally just where we warm up our food. But if you put garlic in there for long enough for several hours, it will actually roast it and it's a real treat."

It may not seem like much, but when your usual meals consist of Thermostabalized foods (think: stuff you can eat from a pouch), it's a luxury not to be overlooked. "That act of making your own food and creating something — I like to do that for my crewmates," Koch says. "It really is a unique opportunity that we get here once in awhile."

"We don't need to lay down into a bed — we actually couldn't. But, we do have a sleeping bag that we can zip ourselves into so that we don't float away while we sleep."

Just as important to Koch is making time for herself — which, as anyone with roommates knows, isn't always easy when you're sharing a space with five other people. Often, she'll tuck up next to a window where she likes to read (an activity, it's worth noting, that requires no upside-down tape). She loves to take photos — her Instagram page is dotted with everything from dreamy views of Earth to seriously epic space selfies — and says that being in space has only helped her up her game in this arena. "I've been a photographer for many years, so to get to do that up here is definitely taking my hobby to the next level," she quips.

Her personal quarters are, she admits, small. "If you stick your hands out ... you can kind of touch either wall," she says. She doesn't have room for a bed, but that's OK — microgravity prevents her from physically lying down to go to sleep anyway. "Inside there we have a sleeping bag, which is attached to the wall, because we don't need to lay down into a bed — we actually couldn't," she says. "But, we do have a sleeping bag that we can zip ourselves into so that we don't float away while we sleep."

"We also have a computer in there, so we can email," she says of her crew quarters. "That's where our primary communication is. We have software that allows us to use our computer just like a telephone, so we can call people from there. We can also decorate the space with photos from home, mementos from home, things that people have sent us in care packages, and just things to make the space station feel comfortable."

I ask Koch how she decided what personal belongings to bring with her. When you're preparing to spend almost a year in space — a literal world away from home — what creature comforts bring you the most joy? "A pair of socks here, a photograph there," Koch says. "My husband and I have a tradition that every time we travel, we bring home for each other a baseball cap or a trucker's-style hat," she says. "So I brought two of those from our collection up on board with me, and I have them hanging in my crew quarters, so those always remind me of my husband and how much fun we have when we travel together."

This coming February, almost a full year after starting her journey, Koch will be back on solid ground, sharing what she knows about small corners of the universe few people will ever get to see. With just a minute or two remaining on our call, I ask Koch what she wants to accomplish during her record-breaking spaceflight. She pauses a moment, or maybe it's just the slight delay in our connection. "I think number one is just giving back and contributing as much as possible when I'm here, and that is on every level you can imagine," she says. Her hope is to represent her experience to the best of her ability — to give back to those who got her there, pay tribute to the trailblazers who came before her, and spark curiosity in a new generation of explorers to come. One of her biggest goals, Koch says, is "giving back to just the rest of humanity that doesn't necessarily get to come up here and see this view ... to carry their dreams with us and to share everything we're seeing and learning from here."

Another voice crackles on the line with us: "Station, this is Houston ACR. That concludes the event." A few seconds later, everything goes quiet. It's not until we watch NASA's video recording of the interview later that we see it — Koch does a little wave, and then floats upward and out of frame.