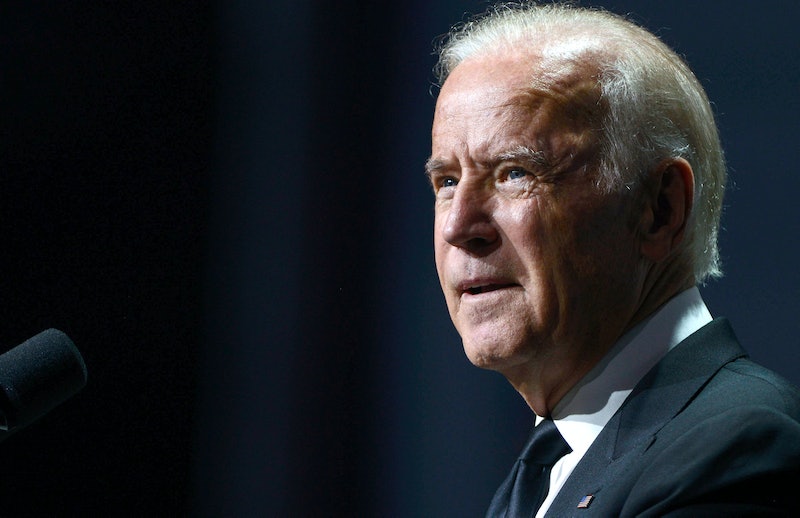 In this op-ed, author and freelance writer Stefanie Iris Weiss delves into the experiences Lucy Flores, Amy Lappos, and Stephanie Carter say they had with Joe Biden and lays out what the former VP — as well as the rest of us — has to learn from them.

This past weekend’s biggest news yet again involved the intersection of politics, power, and women’s bodies. Former vice president Joe Biden is at the center of a #MeToo-era scandal of his own, and it’s one he — and everyone — can learn from.

Lucy Flores, a former Democratic nominee for lieutenant governor of Nevada, wrote an essay for The Cut in which she described experiencing an extremely uncomfortable moment in 2014. Flores wrote that Biden came up behind her, put his hands on her shoulders, and slowly kissed her on the back of her head at a campaign rally. Although she explicitly said in the essay that she is not accusing Biden of sexual assault, Flores said she felt the need to come forward to describe her experience — knowing she’d take heat for doing so in a charged political environment — because her story should matter to those vetting him as a potential presidential candidate.

For his part, Biden responded quickly. "In many years on the campaign trail and in public life, I have offered countless handshakes, hugs, expressions of affection, support and comfort," his statement read. "And not once — never — did I believe I acted inappropriately. If it is suggested that I did so I will listen respectfully. But it was never my intention."

But he has more work to do. We all do.

Shortly after Flores came forward with her story and began making the rounds on cable news, the internet revived an image from 2015 in which Biden had his hands on the shoulders of Stephanie Carter while her husband, Ash Carter, was sworn in as the U.S. defense secretary. Carter pushed back on the narrative that she, too, was a woman caught in an uncomfortable moment with Biden in an essay published on Medium. She explained that Biden is a close friend of hers, and that she was perfectly OK with his hands on her shoulders.

But Carter also acknowledged Flores’ story, writing, "I absolutely support her right to speak her truth and she should be, like all women, believed. But her story is not mine."

Then on Monday, Amy Lappos, a former congressional aide, also came forward with what she described as an uncomfortable experience with the former vice president. Biden pulled her in close to rub noses with her, she told The Hartford Courant, saying, "It wasn't sexual, but he did grab me by the head."

This is not a call to "cancel" Biden. This is a moment for him and other men to learn from.

I believe Lucy Flores and Amy Lappos, and I believe Stephanie Carter. In a world of Twitter hot takes and binary categories of right and wrong, there are nuances and context that need to be discussed here. There’s a key difference between the experiences of these women. Carter mentioned she is longtime friends with Biden, whereas Flores wrote that she had no personal relationship with him whatsoever.

Any man — especially one with as much power and privilege as the vice president of the United States — has no right to touch a woman he barely knows. Shaking hands when you meet someone is fine, but all other categories of touching are off limits until and unless you know what that woman (or any person) is comfortable with. Whether it’s putting one’s hands on a woman’s shoulders, kissing her hair, or hugging her, invading a woman’s personal space without consent is simply wrong.

In the #MeToo era, we’re all evolving together. This is not a call to "cancel" Biden. This is a moment for him and other men to learn from. Most men get that you can’t slap a woman on the butt or touch her breasts (and it took hard work to get them to understand this) but many still seem not to understand that touching a woman’s body, period, is not OK unless explicit consent has been granted. Men may believe it’s fine to squeeze a woman’s shoulder, put a hand on her arm, or bring her in for a close hug, but it’s not. And truly, it’s never been fine. We just never felt safe enough to speak up about it until #MeToo set us free.

For women, this is another opportunity for us to stand in our power and speak up about owning and living in our bodies in the age of #MeToo. Even women who haven’t experienced the brutality and trauma of assault or rape often feel like they have to wear armor just to go to work, to school, or to simply walk out of the house. It’s because, in part, men in power have had free rein — largely without pushback — to touch us at will. Men constantly invade our spaces, from manspreading on the subway to awkward, creepy shoulder rubbing.

Thanks to these women, we can finally have a conversation about these boundaries — and hopefully loosen our armor a bit as a result.