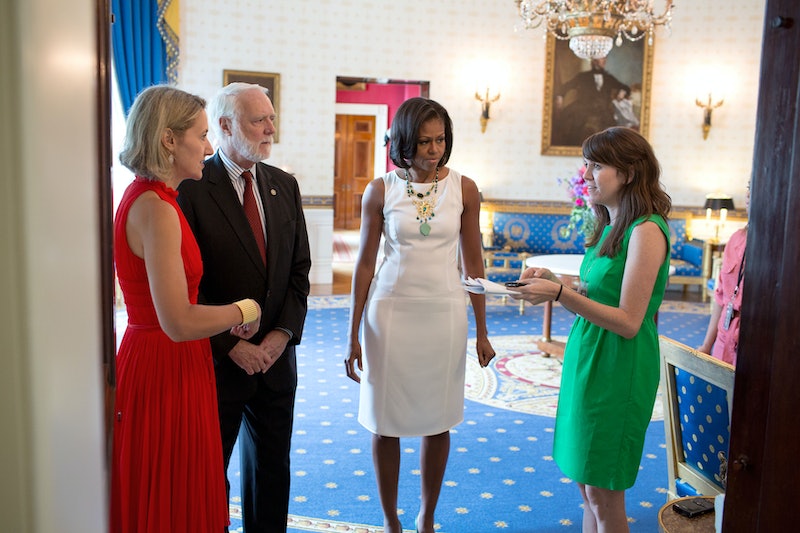 As Barack and Michelle Obama prepare to leave the White House, those closest to them are remembering their time together. After working with the Obamas in various capacities since 2007, Lauren Kelly, the deputy social secretary for the first lady, tells Bustle there's one thing about Michelle that she'll never forget. "The thing that I remember from those earliest days, which I still think of now, is that she’s just such an authentic person," Kelly says, adding that it's something she will take with her moving forward.

As Kelly is getting ready to plan her final event for Michelle on Jan. 6, she remembers their first event together like it was yesterday — when kids visited the White House to help Michelle plant and harvest vegetables in her garden.

Kelly says she realized how sincere Michelle was in every encounter at their first event together. She was true to what Kelly had seen from afar, starting all the way back to that first, unforgettable time she witnessed Michelle giving a speech for Obama on the campaign trail in 2007. "She was always incredibly supportive of her team and always incredible to help create these moments that she had to play a part in," Kelly says. "It’s something that I still see today."

That authenticity and inspiration is something Kelly says she immediately recognized in Obama, too. Just one year out of college, Kelly heard of then-Sen. Barack Obama, who was running for president. Kelly was so inspired by the Obamas that she marched to his campaign headquarters in Des Moines, Iowa, and asked how she could get involved. "I was just inspired with their story and who they are and their message of bringing the country together," Kelly says, adding she wanted "to have any piece of supporting these really awesome people."

In many ways, the 2008 presidential election was an unforgettable moment in American politics. In Iowa, Kelly's home state, Obama earned 54 percent of the vote and overwhelmingly charmed millennials, receiving 61 percent support among those aged 18-29. Obama was ultimately elected our first African American president, thus igniting what would become his eight-year presidency.

Kelly has been completely immersed in "The Obama World" from the beginning, which means that she's seen Michelle's genuine personality and kindness for years. Initially, Kelly was a volunteer knocking on doors in 2007, later becoming an intern and field organizer campaigning around the country in 2008. After that, she moved to D.C. in hopes of landing a role in the administration. From two years in Homeland Security to a year in the White House Office of Public Engagement, Kelly tells me she was ultimately moved to the White House Social Office in 2011, where she's been ever since. "No job was too small; I wanted to be able to play a small role in something I thought was really important."

In 2015, Kelly was promoted to serve as the deputy social secretary for the Obamas, specifically in the first lady's office. "If you would've told the 2007 version of myself where I would be in 2016 I would be thrilled," Kelly says, laughing, and revealing that this is something she thinks about a lot.

Now, Kelly, pictured above, manages a team of five others in the White House. As deputy social secretary, Kelly says she's "constantly looking at the long term plan and figuring out... what the president and first lady need and want to do in the White House." Kelly has planned several hundred events with her team, but tells me that she works closely with the White House residence staff (butlers, chefs, groundskeepers, and Secret Service) to make the events go as smoothly as possible.

These events range from kids helping the first lady harvest vegetables in her garden to state dinners where a Head of State visits the White House and has dinner. Because Kelly has helped plan and execute these events, she's seen a glimpse of who Michelle really is when she's meeting with different people.

"What I’ve loved so much about the White House is being able to play a small role in something that’s really meaningful."

No matter who the first lady met with, Kelly tells Bustle that she'll always remember Michelle's personality and how easy it was to work with her at these events. "I think you see the same person in all of those [events], and she brings the same amount of energy and enthusiasm, and, to a lot of us, inspiration in all of those different scenarios," Kelly says.

After spending nine years as part of "the Obama World," it's clear Kelly is going to miss the president and the first lady. She's planning a vacation after Jan. 20 before she figures out what's next. "What I’ve loved so much about the White House is being able to play a small role in something that’s really meaningful and has an impact on people’s lives, so I’d love to jump into another job that has a big mission like that." Kelly might be leaving the White House, but she says, jokingly, that she hopes she and Michelle will be pen pals in 2017. After all, sending an occasional handwritten note would be a natural gesture of friendship from the "authentic" first lady to her former social secretary.

Images: These official White House photographs are being made available only for publication by Bustle. The photographs may not be manipulated in any way and may not be used in commercial or political materials, advertisements, emails, products, promotions that in any way suggests approval or endorsement of the President, the First Family, or the White House.