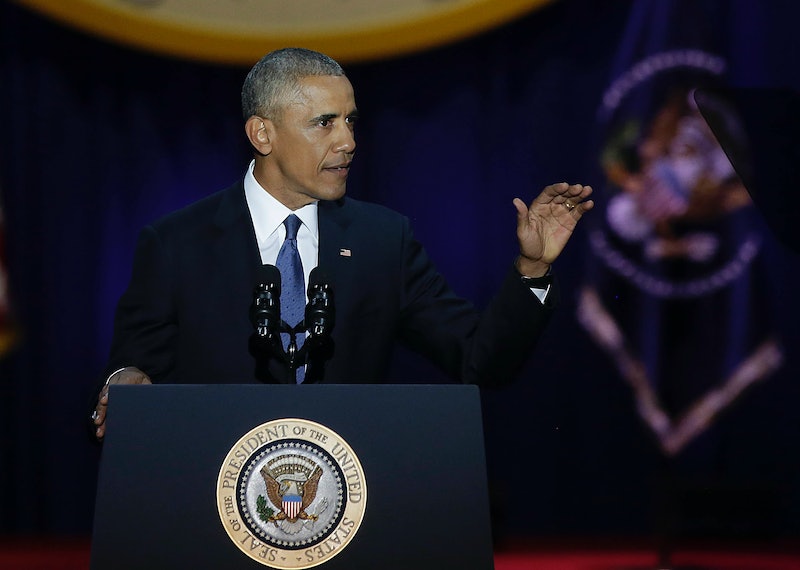 President Barack Obama has delivered the final public address of his presidency, speaking to a packed hall in his hometown of Chicago, Illinois. And amid the speech, with touched on a range of subjects ― from his own political tenure, to race, to the nature of American democracy ― there was one moment of friendship that really stood out. In case you missed it, here's what Obama said to his "brother" Joe Biden that made him tear up.

Obama and Biden have spent more than eight years joined at the hip, ever since the then-Illinois senator named the then-Delaware senator his running mate back in the summer of 2007. And while presidents and vice presidents are under no obligation to be chummy, and sometimes the relationships can get pretty frigid ― just ask Bill Clinton or Al Gore ― Obama and Biden have always represented themselves publicly as close friends, confidants, and people who genuinely enjoy one another's company.

Which is probably why Biden got such a seemingly heartfelt shout-out in the president's final speech to the nation. Here's what Obama said, as he slightly choked up saluting Michelle and his children Sasha and Malia, along with his loyal vice president.

To Joe Biden, the scrappy kid from Scranton who became Delaware's favorite son, you were the first decision I made as a nominee and it was the best. Not just because you've been a great vice president, but because in the bargain, I gained a brother. And we love you and Jill like family, and your friendship has been one of the great joys of our lives.

Biden, 74, has weathered a rough end to his vice presidency in personal terms ― his son Beau died in 2015, an additional piece of personal tragedy in a life's story full of similar examples. Suffice to say, if anyone deserved a warm and emotional send-off in the final days of the campaign, it's Biden.

The relationship between the two has also been ripe fodder for internet memes, celebrating the idea of a sort of older brother/young brother dynamic between the two, with Biden largely playing the jester to Obama's straight man. Suffice to say, this is the rare circumstance where it seems like the population perception of a jovial friendship between two public figures is actually true.

The only real question is whether Obama and Biden will keep in contact once their administration disbands ten days from now ― and, of course, whether the latter's political career is actually over, or whether he might be drawn into mulling a presidential bid in 2020.