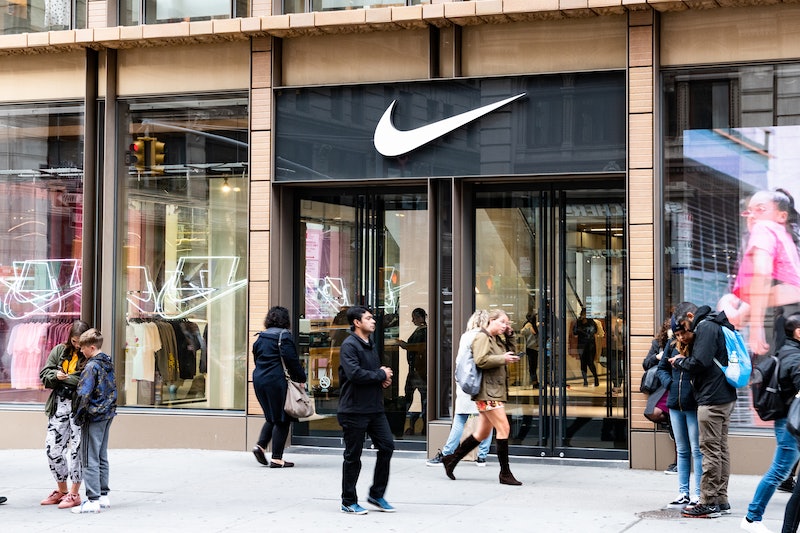 With each passing hour, the news about coronavirus is shifting. Countries are mandating school closures, businesses are shuttering, and individuals are being strongly urged to stay home to practice social distancing. Add to that, a long list of canceled events and stores closing due to coronavirus … at least for the time being.

Brick-and-mortar locations are closing up shop for anywhere from two weeks to two months, modifying their schedules based on new information that is trickling in. But don't worry: E-commerce sites are still running and experts say it's safe to shop online with precautions.

Ahead, find all the stores that have closed in the United States due to the rising epidemic and how the retailers are pledging to compensate employees and cater to shoppers.

The activewear brand has announced that it will be closing all stores in North America and Europe through March 27. Additionally, it will be paying any employees who are required to self-quarantine for the mandated 14 days.

Urban Outfitters has announced that it will be closing all stores “until further notice,” assuring customers that it will still “continue to engage with [its] UO Community however [it] can.”

Everlane is temporarily going back to its roots as an online-only business. The brand closed all retail stores until the end of the month.

Outdoor Voices has closed all 11 of its stores in the United States and also postponed or canceled all community events that it had on the schedule for the foreseeable future.

With 19 retail stores, Reformation has announced that all doors will be closed until further notice. Online shopping is still currently available.

With a more widespread reach when it comes to closures, Nike has announced that it will be shuttering all stores in the United States, Canada, Western Europe, Australia, and New Zealand, which includes all Converse-branded stores as well.

Goop has closed its permanent locations in New York, San Francisco, and London, along with its pop-up in Aspen. The in-hotel location at the Rosewood in Montecito will remain open as long as the hotel is open, as well as their pop-ups in Brentwood and Palm Beach.

The brand has closed all of its locations outside of Asia under both the Abercrombie as well as Hollister labels. It amounts to nearly 880 stores in total.

Patagonia has closed all of its stores and operations for the duration. And making the choice to halt production will certainly make an impact on availability of goods.

The footwear brand has closed all of its stores in the United States and Europe with online ordering still fully available.

Closing nearly 90 stores in North America, Aritzia is still operating as an online business. It has announced that it will be donating all of its profits for the time being to Community Relief Fund.

Away Travel has closed all of its stores across the United States, Toronto, and London and halted the opening of a new location in Dallas. It has made an official announcement that all of its employees will be paid in full for the duration.

Through at least March 27, Levi’s stores will be closed throughout the United States and Canada. The e-commerce ship will still be operating as normal and store workers will continue to be compensated for the hours that they would have worked in-store.

The jewelry brand announced on Instagram that it would be closing its Fifth Avenue location in New York City, but will be “working remotely to accommodate any client needs upon request.”

Assuring its customers that, to the best of its knowledge, none of its employees have tested positive for COVID-19, Anthropologie has closed all of its stores (including Terrain) until at least March 28.

Assuring that it plans to pay employees for the time off, Rent the Runway has made the decision to close all stores, adding that they are “taking it week by week.”

La Ligne will be closing its one Madison Avenue retail store in New York City. Encouraging shoppers to support local businesses, however, the brand is offering 15% off all online purchases with the code XOLALIGNEXO. Additionally, it is offering virtual and concierge shopping experiences by emailing madison@lalignenyc.com.

J.Crew announced on Monday afternoon that they would be closing all J.Crew and J.Crew Factory stores, effective immediately, until at least the end of the month.

Although Bergdorf Goodman as a whole still remains open (as of Monday afternoon), Kentshire Gallery’s shop on the 7th floor will be closed until further notice.

After opening their first brick-and-mortar store in New York City only two weeks ago, Solid & Striped, too, has made the choice to shutter their location until further notice.

Tory Burch, as well, announced on Instagram that the brand would be closing all of their stores in the United States and Canada through at least March 29. Online shopping will still be available.

Throughout the United States and Canada, H&M has closed all of their retail stores in order to “reduce contraction of the virus.”

Stating that community is such an integral part of their business, Glossier has made the decision to shutter all retail stores until further notice.

Sephora has announced that due to COVID-19, they will be closing all retail stores in the United States and Canada.

Belgian Shoes’ newly-renovated and recently re-opened store will be closing at least until March 30.

Following Nordstrom in department store closures, Bloomingdales made the decision on Tuesday to close all retail stores until further notice.

Celine announced on Wednesday that they would be closing all of their boutiques until further notice. E-commerce will still be available.

This article will continue to be updated as new information comes out.

Can Coronavirus Live On Clothes? Your Fashion Questions, Answered

Here Are All The Events Canceled Due To Coronavirus, From SXSW To The Rome Marathon

Coronavirus Anxiety Is Everywhere. Experts Explain How To Feel Better

If you think you’re showing symptoms of coronavirus, which include fever, shortness of breath, and cough, call your doctor before going to get tested. If you’re anxious about the virus’s spread in your community, visit the CDC or NHS 111 in the UK for up-to-date information and resources, or seek out mental health support. You can find all Bustle’s coverage of coronavirus here, and UK-specific updates on coronavirus here.