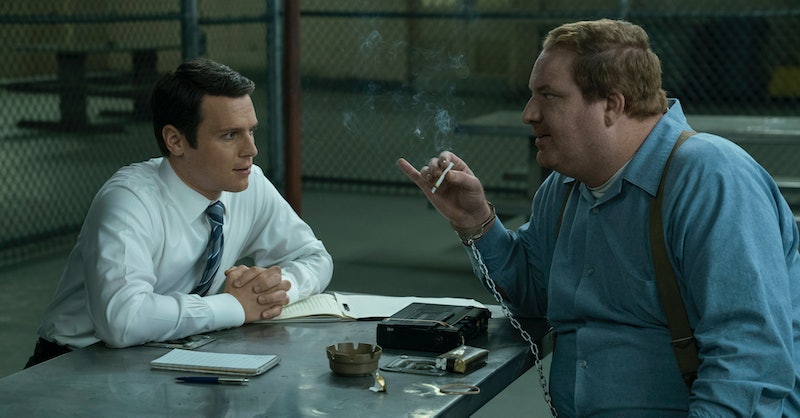 Netflix's Mindhunters follows two fictional FBI special agents Holden Ford (Jonathan Groff) and Bill Tench (Holt McCallany) as they investigate the minds of serial killers. And, if you were wondering what the Mindhunter serial killers look like in real life, I've got you covered. The series takes place in the 1970s, as Ford and Tench set out to figure out the minds and motives of such murderers as part of the FBI's not-so-valued Behavioral Sciences Unit. And, the resemblances between the actors playing the roles on-screen and the real-life serial killers are seriously uncanny.

According to IndieWire, Ford is based on real-life FBI agent John E. Douglas, who co-authored the book on which the series is based, and Tench's character is inspired by Robert K. Ressler, who is believed to have created the term "serial killer." In addition to the spot-on casting of the serial killer roles, some of the dialogue by Edmund Kemper ("The Co-Ed Killer") in Mindhunter is actually from real interviews with him, reported Vulture. In the series, Ford aspires to interview Charles Manson, and gets to speak to many other convicted murderers, including Richard Speck, Jerry Brudos ("The Shoe Fetish Slayer"), and Dennis Raider ("BTK").

Check out what the real-life serial killers from Mindhunter look like below.

Known as the "Co-Ed Killer," Kemper became a murderer at age 15, when he killed his grandparents, allegedly just "to see what it felt like," according to Psychology Today. He was convicted of murdering six women in Santa Cruz, California, and killing his own mother Clarnell Kemper before turning himself in to the police in the 1970s, according to the same article. Kemper is still alive and is currently incarcerated at the California Medical Facility in Vacaville at 68 years old, according to the NY Post.

In Mindhunter, Kemper is played by actor Cameron Britton, who sports a very similar mustache and hairstyle to the killer.

In July 1966, Speck was convicted of murdering, raping, and torturing eight student nurses for four and a half hours in their Chicago townhouse, according to NBC News. He was arrested by police after a failed suicide attempt. He died of a heart attack in prison in 1991, right before he was to turn 50 years old. In Mindhunter, Speck is played by Jack Erdie.

Many know Brudos as "The Lust Killer" and "The Shoe Fetish Slayer." During the 1960s, Brudos was convicted of murdering four women in Oregon and stole some of their shoes, according to the New York Daily News. He died in prison in 2006 from liver cancer. In Mindhunter, Happy Anderson steps into the on-screen shoes of Brudos.

The description of Rader's known crimes is right in his nickname "BTK," which stands for "Blind, Torture, Kill." According to Rolling Stone, he murdered 10 people over three decades, starting in 1974 when he murdered a Kansas family and ending in 2005 with his arrest. Rader is currently serving 10 life sentences in prison. But in Mindhunter, Rader was just at the beginning of his killing spree. Actor Sonny Valicenti takes on the role of Raider in the series.

Devier isn't a serial killer, but he was arrested in 1979 for kidnapping, raping, and killing a 12-year-old girl with a rock in Georgia, according to United Press International. He executed by electric chair in 1995 at age 39. In Mindhunter, Devier is played by Adam Zastrow.

Though Mindhunter is partially fiction, there is still so much real about it — including the serial killer identities and the crimes that they committed in reality. Now that you know what these murderers looked like in real life, you can see how the actors playing them on Mindhunters measure up.