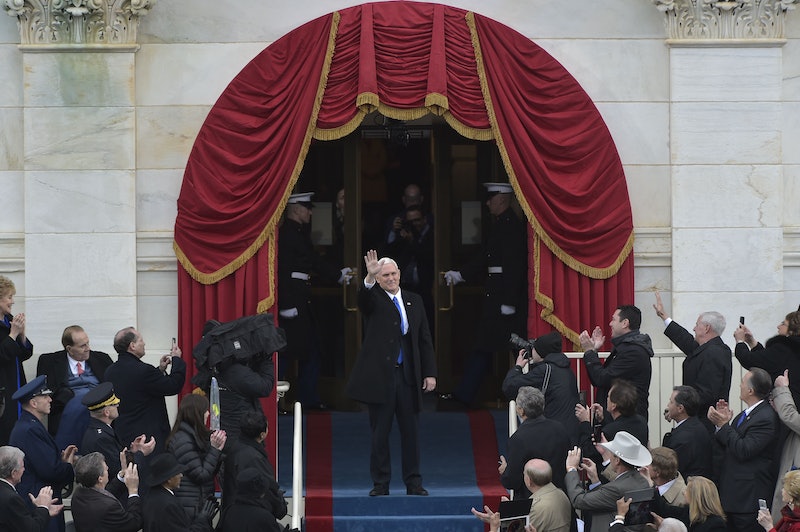 With all the festivities surrounding inauguration weekend, it's important to know the exact timing of the big event itself — the swearing-in and official inauguration of Donald Trump as our 45th president. Those watching at home or folks who are simply curious to know what's happening in Washington, D.C. today should know what time Donald Trump's inauguration ends.

The swearing-in started at 11:30 a.m. ET, and the oath of office, initially intended to be administered at 11:45 a.m., began around noon, with Trump's inaugural address beginning directly after. Depending on the length of his speech, the inauguration itself should end around 12:15 or 12:30 p.m., and according to the inaugural schedule, will be followed by the inaugural parade from the Capitol building to the White House, down Pennsylvania Avenue.

The inauguration itself is at at the epicenter of the three-day-long weekend of festivities, events and demonstrations. It began on Thursday, Jan. 19, with Trump's welcome celebration, but the bulk of the events are centered on Jan. 20, the day of Trump's swearing-in. The day is jam-packed with events, from a private breakfast and prayer service to the Obamas' official and final departure from the White House following the swearing-in.

After the official protocols of the swearing-in and the parade down Pennsylvania Avenue, the parties of the inauguration will begin. As is customary, the newly sworn-in president and first lady will attend inaugural balls in celebration of the occasion, though Trump will be at far fewer balls than previous presidents. Boris Ephysteyn, Trump's inaugural committee spokesman, said this move was intentional:

This is a workman-like inaugural. This is not a coronation. And you've seen some inaugurals in the past that maybe did seem like a coronation. Again, it's every president's choice. This president wants to get to work.

Unfortunately, one of the first inaugural parties, which took place on Thursday night, was the cause of some stir when anti-Trump protesters outside of the "DeploraBall" were pepper-sprayed by police following reported violence from the crowd.

For all the pomp and circumstance, and whatever one's opinion of Trump and his growing administration are, this inauguration is both a historically significant and a fascinating display of American governmental tradition. Inaugural ceremonies haven't changed much since the inception of the United States, and the fact that Trump, who just became the least politically-experienced president in American history, is taking part in these traditions is unique unto itself. The inauguration might be over, but this one surely won't be forgotten.