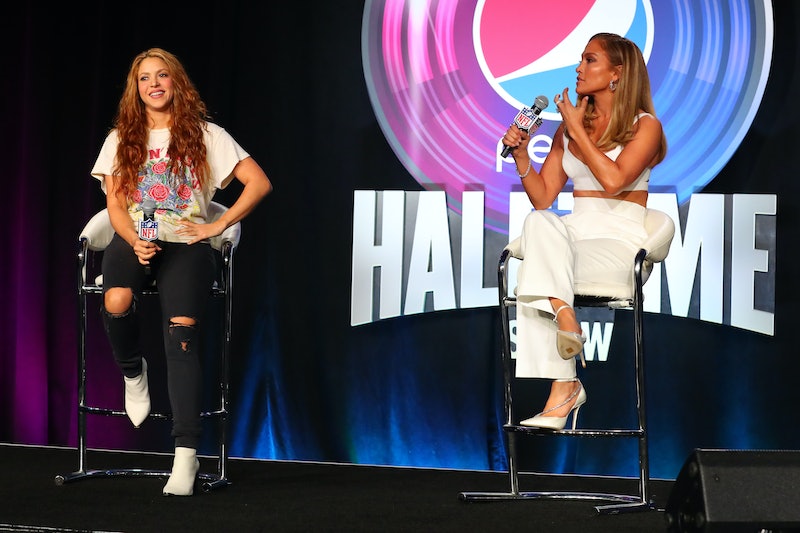 Let's be honest, when it comes to the Super Bowl, the order of priority for most people is: the star-studded halftime show, the snack spread your friend is serving at their viewing party, the funny commercials, and then finally the ball being thrown around the field between movie trailers and Budweiser ads. Knowing what time the 2020 Super Bowl halftime show will start, then, is key: you don't want to be in the bathroom or filling up your plate in the kitchen when Jennifer Lopez and Shakira take the stage.

Unfortunately, pinpointing the exact timing of the halftime show isn't an exact science. For those not well-versed in football, there is a total of 60 minutes of play time in one game. That's divided into two 30-minute halves, which are each divided into two 15-minute quarters. But thanks to commercial breaks and timeouts and fouls and whatever else happens, those "15 minute" quarters can often extend to double that length or more. Still, kickoff for Super Bowl LIV is scheduled to take place at 6:30 p.m. ET on Sunday, Jan. 2, and if all goes according to plan, the halftime show should begin sometime between 8 and 8:30 p.m. ET.

As for the show itself, surely J.Lo and Shakira's performance will transcend underwhelming shows like the Black Eyed Peas' 2011 set, but between previous acts like Beyoncé and Prince, the bar is still pretty high. Regardless, both women are honored just to be on the stage. "It's like winning the Oscar," Lopez told Time after being announced as the Super Bowl's headliner. "It's the biggest show that there is. It has the biggest audience."

Lopez won't win an Oscar anytime soon, given that she was outrageously snubbed by the Academy this year for her stellar performance in Hustlers. But the Super Bowl is one heck of a consolation prize; while nearly 30 million Americans tuned into the Oscars last year, that number was closer to 100 million for the 2019 Super Bowl. Besides, J.Lo may deserve an Oscar, but the Oscars don't deserve J.Lo. Neither does the Super Bowl, to be frank, but we'll take it anyway.

More like this
Twitter Is Freaking Out Over Rihanna’s 2023 Super Bowl Halftime Show Announcement
By Stephanie Topacio Long
Everything To Know About Taylor Swift’s 10th Studio Album, 'Midnights'
By Grace Wehniainen and Jake Viswanath
Jason Derulo Is Launching A New Singing Show In The UK
By Maxine Harrison
Kanye West Apologizes To Kim K "For Any Stress I Have Caused" In Rare Interview
By Jake Viswanath
Get Even More From Bustle — Sign Up For The Newsletter