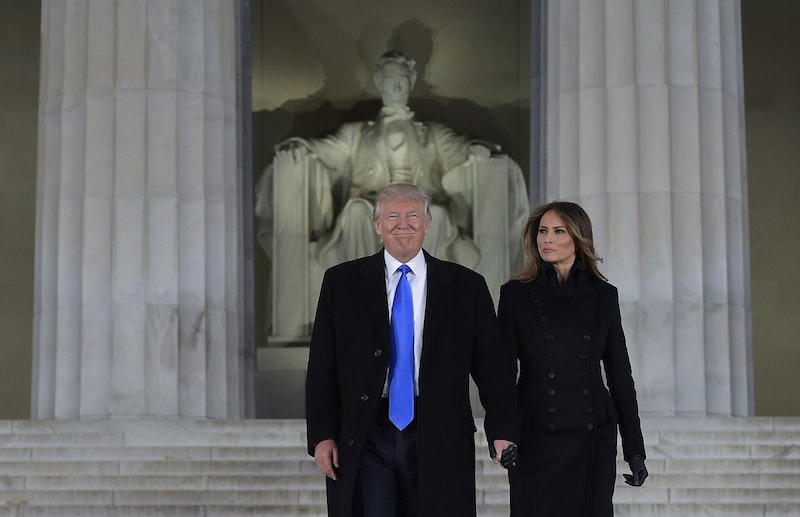 Regardless of where we fall on the wide spectrum of feelings about the inauguration of Donald Trump, the elaborate theatrics of the inauguration itself have been a fascinating spectacle since the election of George Washington. Many wonder, what time is the inauguration ball and what exactly will it entail?

Technically, there are three officially sanctioned inaugural balls for the 2017 inauguration. According to the Presidential Inaugural Committee, there will be two balls that are being referred to as "Liberty and Freedom: The Official Presidential Inaugural Balls," and a third ball called "Salute to Our Armed Services Ball." The balls will start at 7 p.m. and end around 11 p.m., and both Trump and Vice President-elect Mike Pence will reportedly attend all three.

The Liberty and Freedom balls will take place at the Walter E. Washington Convention Center in the evening after the official swearing-in ceremony and the inaugural parade. Tickets were $50 to attend, though the balls may be aired on television if you have a desire to watch.

The Salute to Our Armed Services Ball is taking place at the National Building Museum and is only for "invited guests, who include active duty and reserve military, Medal of Honor recipients, wounded warriors, military families, veterans, and first responders."

So far, the lineup of performers at the 2017 inauguration include the 16-year-old classical pop singer Jackie Evancho of America's Got Talent, as well as members of dancing troupe The Rockettes who are willing to perform, the college procession band The Talladega Marching Tornadoes, and over 300 members of The Mormon Tabernacle Choir.

However, if you're looking to dress up and dance wildly (and possibly weep your full heart out), there are many balls and events all over the country you can attend.

If you are feeling ready to dance and scream and exercise some of your tears and fears away on the night of Trump's inauguration, you check out the list of 2017 Inaugural Balls in your area, and see if any of them connect with your specific event needs, which for many of the people who voted for Hillary Clinton would include copious amounts of champagne and a dark room to weep in. No matter the emotion involved, there will be balls and there will some forms of dancing.

More like this
Will Archie & Lilibet Attend The Queen's Funeral?
By Sam Ramsden
Here’s Everything You Need To Know About Operation London Bridge
By Bustle UK
8 Photos Of Prince George & Princess Charlotte At Queen Elizabeth II's Funeral
By Jake Viswanath
Romance Authors Are Mobilizing For Reproductive Rights
By Natalia Perez-Gonzalez
Get Even More From Bustle — Sign Up For The Newsletter