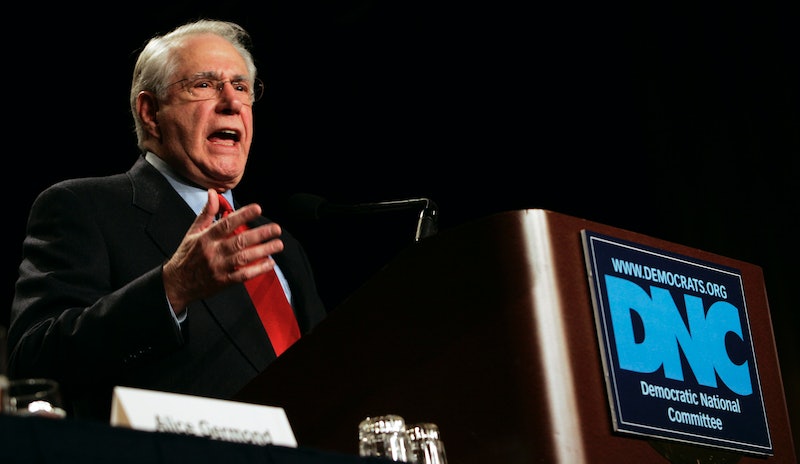 A 2020 presidential candidate who was once the senator of Alaska has released a campaign announcement video on Monday, and it's probably unlike any other campaign ad you've seen before. So, here's what to know about Mike Gravel, whose 2020 candidacy just made the Democratic primary arena a little more crowded — and considering some of his policy positions, maybe even a little more interesting

One of the more unique aspects about Gravel's presidential candidacy is that three teenagers from New York drafted him into the 2020 race, according to Rolling Stone. His political past is nothing to sneer at, though. Gravel, who is 88 years old, is known for supporting the public release of the Pentagon papers, according to the outlet. Titled "The Report of the Office of the Secretary of Defense Vietnam Task Force," the Pentagon papers shed light on America's military record in Vietnam from the 1940s to the 1960s. Mic.com reported that it was a 47-volume document detailing the American army's role in Vietnam and was made released during former president Richard Nixon's administration.

With his political achievements backing him, Gravel's 2020 campaign announcement video is aptly dubbed "Rock 2.0." The video holds little back when it comes to criticizing the effects brought on by American foreign and domestic policies.

It's worth noting here that Gravel is pretty upfront about his intentions. At one point in his campaign clip, there is some text explaining that Gravel is not running in the 2020 race to become president — what he wants instead is compete in the Democratic primary debates and try to push the other candidates left. "America needs voice for justice," the text says. "Help Mike Gravel get to the debates to be that voice."

From Schultz to Klobuchar, each individual can be seen making commentary, which Gravel seems to disagree with. For example, the video features Klobuchar's February remarks at a CNN town hall meeting where she said that she did not support free college in America. The scene then cuts to a cane-carrying Gravel who shakes his head with disapproval.

The video also features old remarks from Gravel while he was a lawmaker. From lambasting American wars in foreign countries to condemning the amount of resources used in the War on Drugs, Gravel can be seen criticizing a variety of political measures. The video shows a clip of a much younger Gravel saying, "Human beings are being killed as I speak to you tonight. [They are being] killed as a direct result of policy decisions we, as a body, have made."

Gravel's video makes it clear that he's not in it to win it. His goal merely seems to be to push the field farther left. And if he keeps winning the youth's support, Gravel's aspiration might just materialize into reality.