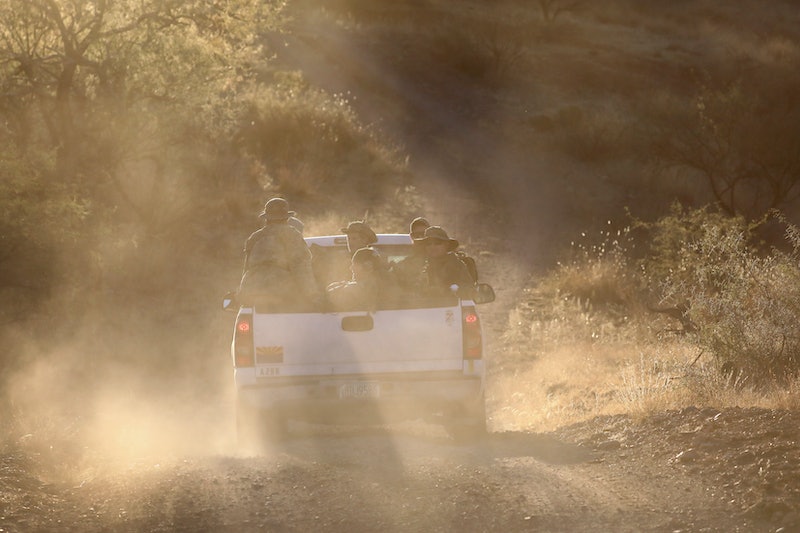 For months, an armed militia known as the United Constitutional Patriots has been detaining hundreds of migrants at gunpoint in southern New Mexico, The New York Times has reported. Video footage of the militia apprehending and holding groups of migrants that include women and children have prompted outrage from civil rights groups. Members of the militia detaining migrants in New Mexico, however, argue their actions are legal and amount to "a verbal citizen's arrest."

In the last few weeks, the United Constitutional Patriots have posted several videos of their activities along the border to both Facebook and YouTube, catching the attention of local media outlets. On Thursday, the American Civil Liberties Union (ACLU) denounced the militia, calling its members "racist and armed vigilantes" in a letter urging New Mexico Gov. Michelle Lujan Grisham to investigate their actions.

"This has no place in our state: we cannot allow racist and armed vigilantes to kidnap and detain people seeking asylum," the letter reads. The ACLU claimed that neither state nor federal law gave the group the authority to detain or arrest migrants. "Their actions undermine the legitimate efforts of our state's law enforcement officials to keep New Mexico families safe and they erode community trust," the ACLU stated in its letter.

Exactly Who Are The United Constitutional Patriots?

According to their Facebook page, the United Constitutional Patriots was started in January of 2014 with a mission "to join patriots together for the common good of our country." The group claims it's "here to uphold and defend the Constitution of the United States of America ... against all enemies both foreign and domestic."

In an interview with The New York Times, Jim Benvie, a spokesperson for the United Constitutional Patriots, claimed it was detaining migrants at gunpoint in an effort "to support the Border Patrol and show the public the reality of the border." He told the paper that the group planned to remain along the border until either President Trump's wall is built or Congress enacts tougher immigration laws for asylum seekers.

The exact makeup of the group's membership is unclear. However, the group's spokesperson told the Times that some members have military or law enforcement experience of some kind.

Why Are They In The News Now?

Earlier this week, the militia shared video footage of its members detaining a large group of migrants somewhere near New Mexico's border. A woman filming and narrating the scene estimated to group to be "about 200" with more "still coming." At one point she directs the viewer to note "all the children" in the group. In its letter to Gov. Lujan Grisham, the ACLU claimed the United Constitutional Patriots had detained "nearly three hundred" migrants near Sunland Park, New Mexico, on Tuesday.

This isn't the first time members of the militia have reportedly stopped migrants. In fact, there appear to be a number of videos depicting such detentions posted by members of the militia to YouTube and Facebook. In one, Benvie appears to say "border patrol" as he approaches a small group of migrants, potentially misrepresenting himself in an effort to detain them, The Guardian reported. In another video, an unidentified member of the militia group can be heard yelling, "policía, alto" (police, stop) at a group of migrants, according to BuzzFeed News.

New Mexico's governor has since condemned the militia's tactics, telling the Times it was "completely unacceptable" that migrants "might be menaced of threatened in any way, shape, or form when they arrive at our border." What's more, she said regular citizens had no authority to arrest or detain anyone.

But while state officials may disapprove, Benvie told the Times that "Border Patrol has never asked us to stand down." A spokesperson for the agency declined to talk about the United Constitutional Patriots with the paper, and a Border Patrol official tells Bustle in a statement that the agency "does not endorse private groups or organizations taking enforcement matters into their own hands. Interference by civilians in law enforcement matters could have public safety and legal consequences for all parties involved."

The History Of Border Militias

Border militias aren't a new concept. According to history.com, American militias established and expanded the country's border by force in the 1830s and 1840s. In the following decades, the website states, vigilante militias continued to "violently" regulate people's movement across the border, although it wasn't always a matter of wanting to keep people out. According to history.com, many Native Americans in Texas were forced over the border and out of the state in the mid to late 1800s. Around the same time, militias also monitored the border for to ensure slaves didn't cross and escape to freedom, the website states.

The ACLU claims that the United Constitutional Patriots have been emboldened by Trump's presidency. "The Trump administration's vile racism has emboldened white nationalists and fascists to flagrantly violate the law," the organization wrote in its letter to New Mexico state officials.

The United Constitutional Patriots have, according to their Facebook page, been conducting what they call "border opps" in New Mexico for a few years now. In 2016, for example, the group said it was "looking for patriots to join with us for border opps, working with the Border Patrole [sic] PROTECTING THE NEW MEXICO BORDER." The ACLU, however, maintains that in detaining migrants at gunpoint, the United Constitutional Patriots are committing unlawful arrests.