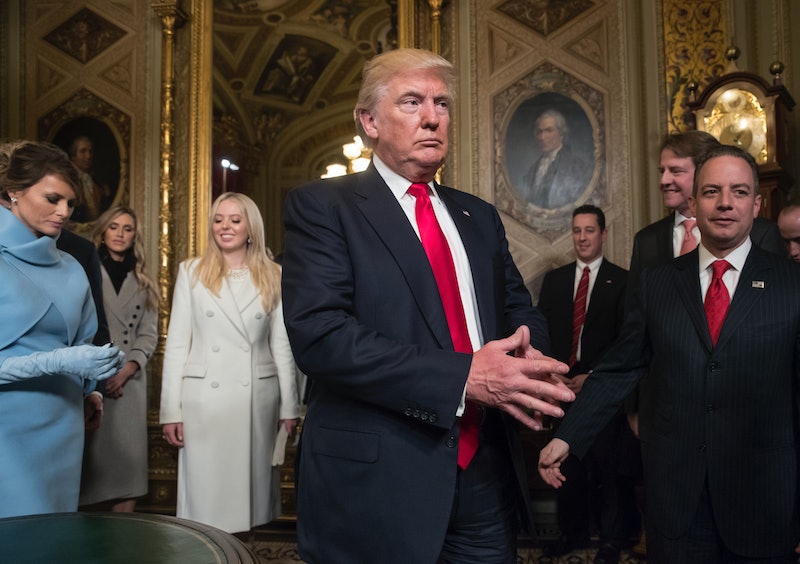 When Donald Trump was merely a candidate running for president, many of his supporters and opponents alike insisted that there was nothing to be afraid of — that Trump would never actually do the things he promised to do. But Trump has been president for a week now, and he has already unleashed chaos both domestically and globally. If you have family members, friends, or other people in your community who voted Trump into office and who are now celebrating his executive orders on everything from Obamacare and immigration, you may be searching for the right way to respond. What can you say to Trump supporters who still think the president has the right idea?

After the "alternative facts" debacle, it may no longer be effective to launch into a series of facts about how carefully refugees are vetted, for example, or how much money undocumented immigrants pay in taxes each year. You should still try, of course, but don't be surprised if the response you receive is something along the lines of "you've been brainwashed by the liberal media."

But in light of the events of the past few days, during which Trump's seven-country Muslim ban resulted in refugees, immigrants with valid visas, and even permanent permanents being detained and deported from airports, we cannot afford to stay silent.

First, start by asking the Trump supporter/s in your life why they voted for him. Ask them what they expected him to do, and listen to what they have to say. This applies in particular to white people and others in positions of privilege; it cannot and should not always be marginalized people's responsibility to make space for Trump supporters' feelings. So, try to get a sense of why these people voted for Trump in the first place, and focus on the big picture. What can Trump do for them that motivates them to justify his recent behavior?

What I have found is this: While you must be able to back up everything you say with facts and data, empathy must also be an important part of the discussion. I know, however, that this can be difficult for many of us. For instance, my own Indian-American community is certainly not exempt from problematic behavior, and when I've confronted Trump supporters in my life, I am often keen to point out specific instances where they're wrong. But unfortunately, and perhaps obviously, that isn't usually productive.

Instead, I've found that creating a sense of empathy and understanding through personal narratives is the most effective way to move forward. These kinds of conversations should make people uncomfortable and unsettle their privilege while also making them think more critically about their points of view.

Start out by telling your Trump-supporting friends and family why these issues matter to you. Be as personal as you can. Share stories with them about your friends, roommates, and colleagues who come from different backgrounds — without tokenizing them — that they cannot simply dismiss as "liberal propaganda."

Then, get more specific about what has been happening in the past few days. You can show them copies of the recently signed executive orders, since those are official documents. Then, ask them how they would feel if they were not able to access health care when they needed it most. Ask them how they would feel if they left the country only to be barred from entry upon their return. And if they laud Trump for keeping them safe, ask them what they are so afraid of.

But if their support for Trump's recent actions lies in explicit bigotry, the most critical thing to do is to expose them to difference. Talk about the clinic doctor who was sent back to Saudi Arabia. Tell them about the families that have been separated. Explain that there are students who can't come back to the States to resume their work. You might also want to mention Iranian director Asghar Farhadi, who can't even come support his own film at the Oscars.

When talking about these issues, it is vital that we humanize those who are most affected. It is much less likely that someone would celebrate Trump and his actions if they actually knew people whose lives and livelihoods were being targeted. Give them faces and stories to associate with recent headlines. Make it clear that their decision to support Trump has already had tangible, devastating consequences for many communities.

Ultimately, try to find some sort of common ground; they likely want to survive and have a better life as much as the refugees and immigrants who have been prevented from entering the country.

Next time you find yourself in a discussion with someone who feels differently, remember that empathy is such an important component of these conversations. And we must have these difficult and uncomfortable conversations, because we cannot afford to be complacent.