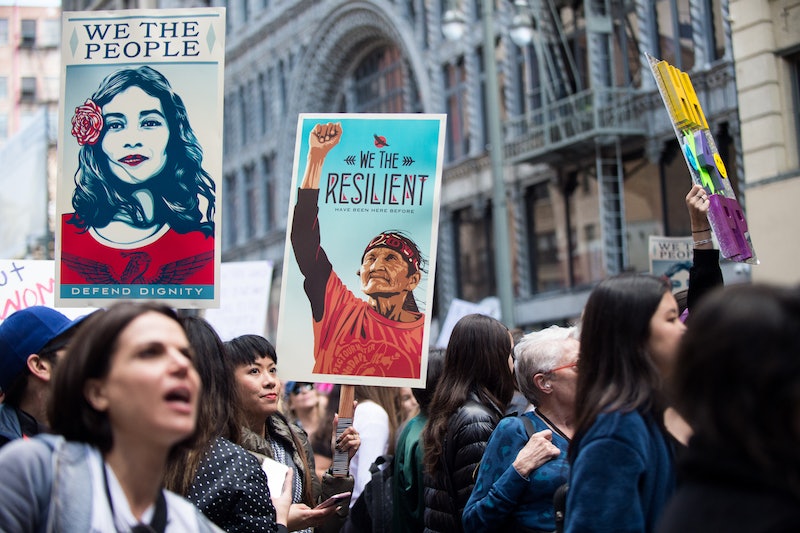 I went to the Women's March on Washington, and no, I didn't think it was going to magically remove Donald Trump from the White House. I've heard a lot of negativity about the idea of protesting lately from people who don't seem to get the point. But what people who think protesting is stupid don't understand is that most protesters don't expect a single demonstration to fix things. Protest has a very important role in the American political process, but it's a lot more complicated than simply demanding policy and receiving it.

We live in a strange era of fake news, where even the White House press secretary spews "alternative facts." Protesting is a way to force a conversation about key issues that some would prefer to ignore or obscure.

For example, the Women's March was an enormous physical display of opposition to Trump. I believe such a visual acts as an extremely important demonstration in the face of Trump's refusal to admit that he lost the popular vote by millions. The upcoming Scientists' March will serve as a similar signal that Americans who care about scientific facts reject Trump's denial of climate science, as well as his attempts to restrict the communications capabilities of various government environmental agencies. I believe a proposed Tax Day March will call attention to the fact that Americans do want Trump to release his tax returns, in spite of his administration's false assertions to the contrary.

Historically, protests can be a very effective way of calling attention to certain issues. Martin Luther King, Jr. delivered his famous "I Have a Dream" speech as part of a massive civil rights march in the nation's capital. The histories of the suffrage and gay rights movements both featured marches and demonstrations that made the silent suffering of some too big to ignore.

America itself was founded on protest; after all, the Boston Tea Party set the American Revolution in motion. It's easy to sit at home and tell people who go out and march that they're wasting their time, but the truth is that while every protest may not change the world, some certainly have.

There is real value in making it known to our elected officials that the people they represent care about women's equality, or climate change, or knowing the full extent of the president's potential conflicts of interest. There is also value in meeting, physically, with like-minded people to discuss the issues that matter to you. Getting involved in political activism and volunteer work is a lot easier to do if you already have experience showing up for the issues you care about.

Protesting may not be the final step in enacting policy change, but it can certainly be an important one. For the next four years, it may be the best vehicle the American people have to voice their concerns with an administration that seems unwilling to listen to dissenting viewpoints.