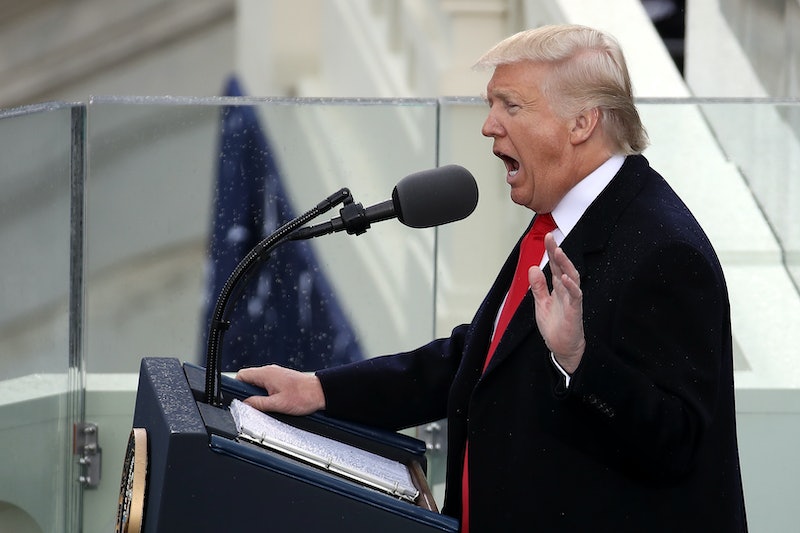 President Donald Trump just became the 45th POTUS. It happened. In what will probably go down as one of the more singular inaugural speeches in history, Trump said his administration would "make everything better." He described an America that was violent, that was full of political corruption, that was, in a word, failing. There will no doubt be plenty of analysis surrounding this dark view of the country, but there is one reference that must not be overlooked. Toward the end of his speech, Trump paused to emphasize that the guiding principle of his administration would be "America First." It's a phrase with ugly roots tied to anti-Semitism and Hitler appeasement, which makes it a strange and disquieting outline for any president's foreign policy.

The America First Committee began on Yale's campus in 1940, a group dedicating itself to keeping the country out of war, at any cost. They advocated for negotiations with Hitler, regardless of what happened to America's longtime ally Great Britain. Not surprising, then, was the attraction many anti-Semitic voices had to the America First organization. Several prominent members had to be removed for making anti-Semitic statements, but the most infamous spokesman for the cause was undoubtedly Charles Lindbergh.

‌ At the time, Lindbergh was a mega-celebrity. As the first pilot to successfully fly a solo Transatlantic route, he'd also been marred by public tragedy. The kidnapping and murder of his 20-month-old son had the nation's attention, making the young pilot not just an admirable aviator, but a deeply sympathetic figure.

He was also a vocal white supremacist. Lindbergh traveled through Germany before the outbreak of World War II, and found their "organization" to be enormously impressive. He did not believe the Germans could be defeated in war, and their anti-Semitism met a friendly audience in the American visitor. In an essay for Reader's Digest, Lindbergh made the kind of declaration now relegated to taboo blogs and Reddit forums. Referring to America and the West, Lindbergh wrote they "can have peace and security only so long as we band together to preserve that most priceless possession, our inheritance of European blood."

He would take that sentiment to the America First organization, and eventually his anti-Semitism made its way to a microphone. Speaking at a rally in 1941, Lindbergh let loose with his real thoughts on Jews in America and abroad. "The British and the Jewish races ... for reasons which are not American, wish to involve us in the war. ... Their greatest danger to this country lies in their large ownership and influence in our motion pictures, our press, our radio, and our government," he said, to a crowd that repeatedly booed him (good for them).

After Pearl Harbor, the America First organization shut itself down. Lindbergh became a supporter of the war, but his previous comments earned him the condemnation of President Roosevelt, not to mention a majority of the country.

Trump told the New York Times, “To me, America First is a brand-new modern term. I never related it to the past." He seems either unaware or unbothered by its historic roots in bigotry, though he does share the isolationist impulse of the original America First founders.

Either way, America First is a troubling way to describe foreign policy. That Trump used it in his inauguration speech only raises further disturbing questions.