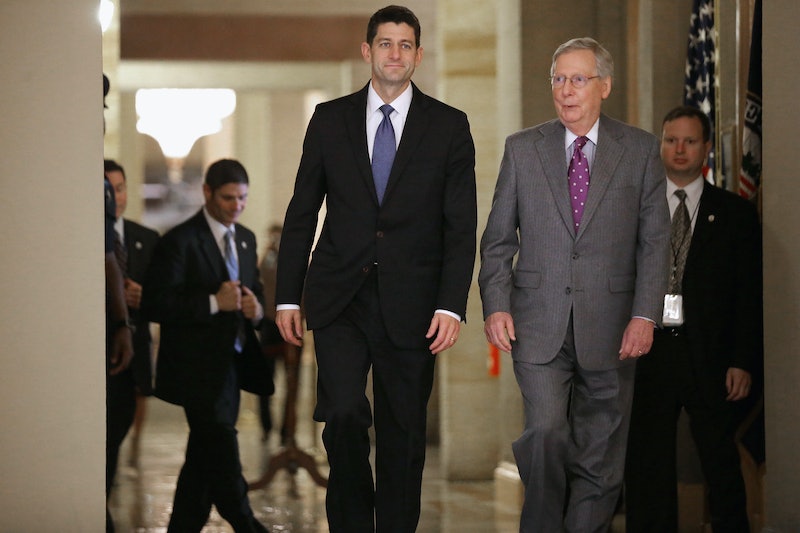 Despite Democratic efforts to safeguard Obamacare, the president's signature legislation looks headed for repeal. In the early hours of Thursday morning, Senate Republicans waited out a prolonged "vote-a-rama" staged by Democrats, and passed the 2017 budget on a 51-48 vote. Should it also pass in the House — where Republicans hold a majority — then the GOP will be well on its way to fulfilling the first part of their pledge to "repeal and replace" the Affordable Care Act. The question then becomes: What do they intend to replace Obamacare with?

In June of 2016, Speaker Paul Ryan introduced a possible Republican alternative. The plan was not given its own name, but was instead part of Ryan's "A Better Way" bundle of legislation proposals on a range of issues, from tax reform to national security. But it is unclear exactly how many Republicans are on board with Ryan's plan.

And further complicating matters, there is a great deal of disagreement over exactly when to actually implement the Obamacare repeal that House representatives will vote on as early as Friday. Adding an extra dollop of confusion, President-elect Trump declared on Wednesday that the replacement would happen "essentially simultaneously" to the repeal. Well... that seems unlikely.

Ryan's Obamacare alternative seeks to retain some of the healthcare legislation's popular provisions, such as insurance availability to those with preexisting conditions and allowing parents' insurance plans to cover their children up to the age of 26. Major changes to the law would include allowing patients to buy insurance across state lines, handing control of Medicaid spending to the states, and relying more heavily on health savings accounts. Alison Kodjak at NPR wrote, "Some health policy analysts say it looks a bit like Obamacare light."

While some politicians have echoed Trump's desire to simultaneously replace Obamacare at its repeal, most congressional Republicans seem ready to focus on getting the whole law repealed — perhaps within the crucial first 100 days of Trump's administration. The GOP has put itself in a potentially tricky position. They've long and loudly vowed to do away with Obamacare; but throwing 20 million people off their insurance coverage would almost certainly entail enormous public backlash.

And certain details of the replacement may prove to be dicey territory for House Republicans especially. In recent years, intra-party fighting has often erupted between traditional lawmakers — lately dubbed the "Establishment" — and a group of hardline conservatives comprising The Freedom Caucus.

One potential point of contention could be whether or not Americans should be given financial assistance to purchase insurance, a key provision of Obamacare. Another possible fight could surround whether or not the new law will cover birth control, a question which Ryan refused to answer in November.

For the millions of Americans who don't want to see Obamacare go, there is a silver lining to this story. Because rather than chucking the law and returning to a pre-2009 healthcare system, Republicans seem set on keeping many of the changes brought in by the Affordable Care Act. As Jim Capretta of the American Enterprise Institute put it, "Republicans through this plan have embraced, I think rightfully so, the basic idea that everybody in the U.S. should have health insurance." And that mentality shift is no small change.