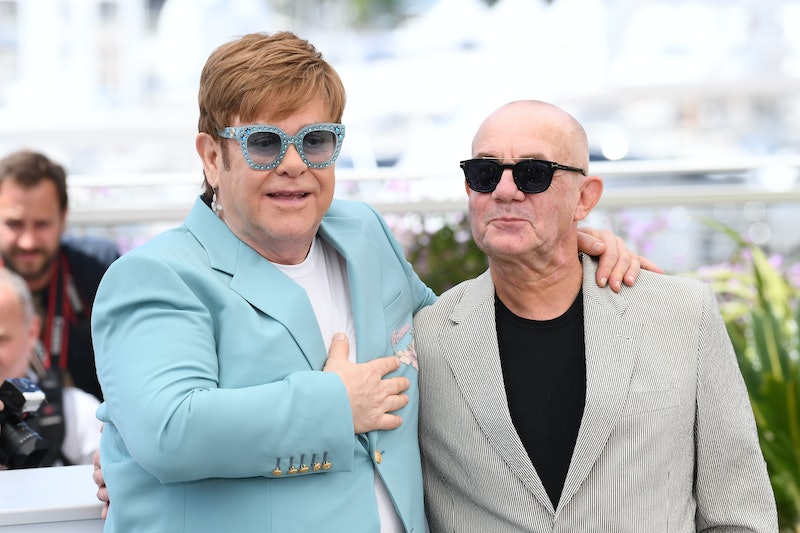 It's taken over 20 years to get his life story on the big screen, but the Elton John biopic Rocketman will finally hit theaters May 31. Any story of John's is, by default, also the story of his longtime lyricist and friend Bernie Taupin, who collaborated with John on "Candle in the Wind", "Bennie and the Jets", "Don't Let the Sun Go Down on Me", and of course, "Rocket Man," among dozens of other songs. Played in the film by Jamie Bell, Taupin's presence throughout John's meteoric rise to fame will finally familiarize the wider public with his work. But what's Bernie Taupin doing in 2019? He's living his own life to the fullest, and indulging in some more big dreams.

Since the early '80s, which is where Rocketman leaves John's story, Taupin has put out more work of his own, including a second solo album, 1987's Tribe, which followed his 1980 effort, He Who Rides the Tiger and a 1971 spoken word album, Taupin. He also started up his own Americana band, Farm Dogs.

Taupin has been divorced three times, and has two daughters with Heather Kidd, as The Daily Mail notes. His longest-lasting relationship has been with John, and speaking with Rolling Stone about their 1975 album Captain Fantastic and the Brown Dirt Cowboy, Elton John noted the same. "I cry when I sing this song, because I was in love with Bernie, not in a sexual way, but because he was the person I was looking for my entire life, my little soulmate ... That relationship is the most important relationship of my entire life." Interestingly John also said the album predicted their futures: "In a way, years later, I ended up being Captain Fantastic and he ended up the Brown Dirt Cowboy: Here, I'm living my fabulous lifestyle, collecting paintings, and Bernie is interested in horses and bull riding and sh*t like that."

Indeed, in addition to starting Farm Dogs, Taupin's actually been his own farm dog for over 25 years. As Realtor explains, in 2017 Taupin finally put his Santa Barbara, CA Roundup Valley Ranch, including stables and indoor arena, up for sale. Taupin called it a "30-acre slice of paradise," noting that the ranch "has just been unbelievably inspirational for me, especially in my writing and my artwork. The songs I've written here have all been inspired by this place and the comfort it gives me."

Speaking of his artwork, according to his own art website, Taupin began painting in the early 90s, moving to sculptural constructions only recently, from 2016 onward. "My dimensional work is simply the visual extension of what I have spent my life creating through words,” he says. Taupin has an upcoming solo show at Galerie Michael titled "The Artist, The Raconteur, & His Blowtorch," showcasing his collage constructions.

But with Rocketman coming out, Taupin's been reflecting a great deal on his past. In the above Paramount Pictures interview clip, he says, "You don't imagine a movie being made about your life. I think you imagine that they usually do that about people who've passed away, and luckily we're still around to appreciate!"