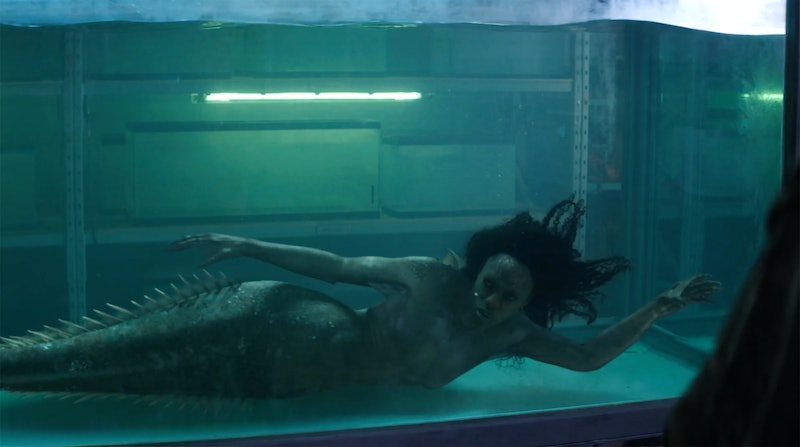 Freeform’s new mermaid-centered TV series focuses on Ryn (the main mermaid) and her quest to find her lost sister. What’s happening to Ryn’s sister on Siren right now isn’t too clear. However, it does seem like she's part of some conspiracy or cover up.

What fans do know is that some shadowy organization, potentially some faction of the U.S. government, has taken hold of Ryn’s sister Donna. While the pair were out swimming, they were separated when Donna was caught up in a group of fishermen's nets. Once Donna was brought up on the boat, obviously, she was distressed. Scared and separated from her sister, she attacked one of the fishermen (Chris), injuring him rather significantly. When the ship’s captain called for a medical evacuation for Chris, a helicopter arrived shortly thereafter with a group of military operatives dressed in all black. They took Chris and Donna, too.

After the chopper evacuation, she was taken to some military base and they are performing various kinds of tests on her. While fans haven’t been officially introduced to his character yet by name, it would seem that Aldon Decker (played by Ron Yuan) is leading the investigation into the mermaids. He’s the one that ordered the painful needle sample test on Donna to obtain spinal fluid as well as other tissue samples from her. Moreover, he’s got enough of a position of seniority where he has private time to be able to look at and interact with Donna.

Something that the main characters Ben and Maddie said in Episode 2 may hint at an important storyline as the season progresses. While driving in the car, the pair talked about why the mermaids have surfaced now when they’ve been around for years. They think it could be “the change in the oceans” clearly referring to global climate change. Climate change is affecting sea life rather significantly in the real world, according to the Environmental Defense Fund. It’s causing coral bleaching, ocean acidification, and potentially most importantly for the story of Siren’s mermaids: Fish migrations.

While, from the outside, this story may seem like a thriller about a terrifying murderous sea monster — in reality, it’s a story of family and bonds between women. One of the stars of the show, Alex Roe (who plays Ben), told Bustle that family bonds are very strong for Ryn. “What makes her really strong and [this] a feminist piece in some ways is that she's leaving her society to try to find her sister," Roe said.

So really, Siren is a story of a woman looking for her kidnapped sister. It just so happens that that woman is a mermaid. That even may be where the story ends, at least according to Ryn, because when Ben’s character asked her in the second episode if she will go home when she finds her sister, Ryan responded with a simple "yes."

Besides Ryn and Donna being sisters, there’s not much else known about them or even if they have any more mermaids in the family. This could potentially be because of Ben’s family history. According to the Bristol Cove shop owner Helen, Ben's family destroyed the mermaid/merman legacy. “In their natural state in the water, [mermaids view] you as prey. Their instinct is to kill. Humans never understood that,” Helen tells Ben. “It caused a lot of misery. Your family’s history in this town is bloodier than you know. Your ancestor … and his shipmates slaughtered those beautiful creatures in cold blood. Genocide. That’s your legacy.” While it’s unlikely that all of the mermaids are extinct besides Ryn and Donna, those are the only ones known of at this time.

Through just two episodes, it may be too early to predict what’s happening and why it’s happening to Ryn’s sister, Donna. However, there’s plenty more that’ll have to be revealed as this first season progresses. Who is Aldon Decker? What does he want from the mermaids? Are there other mermaids out there or are Ryn and Donna the last of their species? Mermaids are mysterious creatures and Siren as a series is proving to be just as mysterious too.

More like this
The Banned 'Friends' Ad Shows Monica As You’ve Never Seen Her Before
By Sam Ramsden
Ashton Kutcher Wants Danny Masterson “To Be Found Innocent” In Rape Retrial
By Jake Viswanath
'Abbott Elementary' Fans Probably Missed This 'Parent Trap' Easter Egg
By Sam Ramsden
This 'Gossip Girl' Wardrobe Error Has Gone Viral On TikTok
By Alyssa Lapid
Get Even More From Bustle — Sign Up For The Newsletter
From hair trends to relationship advice, our daily newsletter has everything you need to sound like a person who’s on TikTok, even if you aren’t.