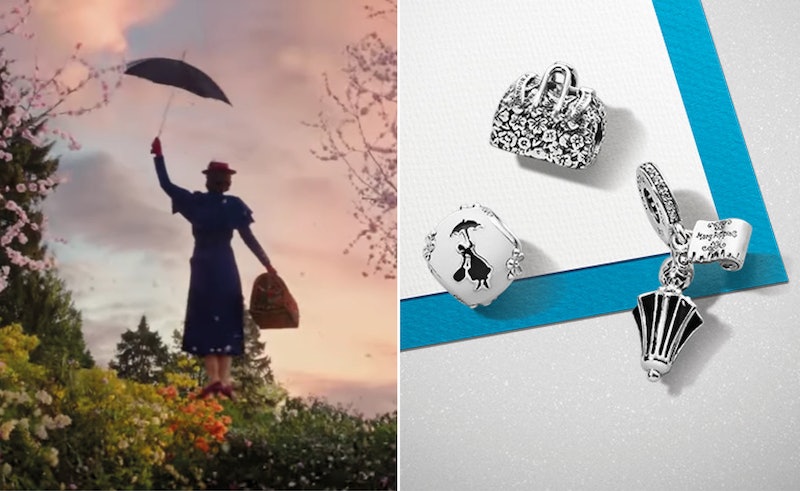 Get excited Disney fans, because Pandora are adding more magical charms to their UK 2018 collection, and it's all thanks to two pretty special events. One of which coincides with the resurgence of a very beloved Disney character, who will be returning to screens this Christmas with her magical umbrella in hand. That's right there's a Mary Poppins Pandora Collection that has arrived just in time for the holiday season, and it's totally fab.

Three charms have been made for the Mary Poppins x Pandora collab, including two iconic items that the character is never seen without. I mean, what sort of Mary Poppins collection would it be without her signature bag and umbrella? Pandora have explained that the umbrella pendant is "hand-painted with quartz based enamel" and costs £55, while the bag is "adorned with beautiful clear cubic zirconia gem stones" and is £40. Sounds magical, right?

The third charm is a combination of the two — a silhouette of the nanny flying with both items in hand on Pandora's signature round charm, adorned with additional flowers. I must be dreaming, this all sounds too good to be true. This charm is also £55, and all three are available to purchase now online or in store.

You have plenty of time to get your Pandora bracelet equipped with these Poppins jewels, as Mary Poppins Returns premieres on Dec. 21. While Emily Blunt is taking the role of the famous nanny originally portrayed by Julie Andrews, the new incarnation remains true to her character even though the story takes place 20 years after the first film.

It's certainly going to be a film you do not want to miss this Christmas, that's for sure, and these charms are an added bonus to celebrate the return of Mary Poppins once again.

You could also add all sorts of additional Disney characters to the mix thanks to Pandora's growing number of classic charms. Their Disney collection was already pretty major, more so now thanks to the coinciding Disney collaboration that celebrates 90 years of Mickey Mouse, which can also be purchased in stores and online now.

As stated in the press release, the collection pays "tribute to Mickey Mouse, one of Disney's most beloved characters of all time, the Pandora designers joined forces with Disney's won character artists to create a truly exclusive, limited-edition anniversary charm of Mickey Mouse." This design with a 90 logo next to the main man himself has only made me more excited for what they do for the 100 year anniversary.

Other beautiful charms are available alongside this one, including some fantastic classic Christmas Mickey's, two adorable Minnie and Mickey clip charms, and a Sorcerer Mickey adorned with a crystal pearl.

Dreams certainly do come true, especially when it comes to Disney x Pandora.

More like this
'The Lord of the Rings: The Rings of Power' Revisits Iconic Spots From 'The Hobbit'
By Darshita Goyal
Pandora’s New Collection Is A Real Work Of Art
By El Hunt
Harry Styles’ Red Carpet Looks Have One Thing In Common
By El Hunt
Anne Hathaway Revived 'The Devil Wears Prada' In The Most Andy Sachs Way
By El Hunt
Get The Very Best Of Bustle/UK