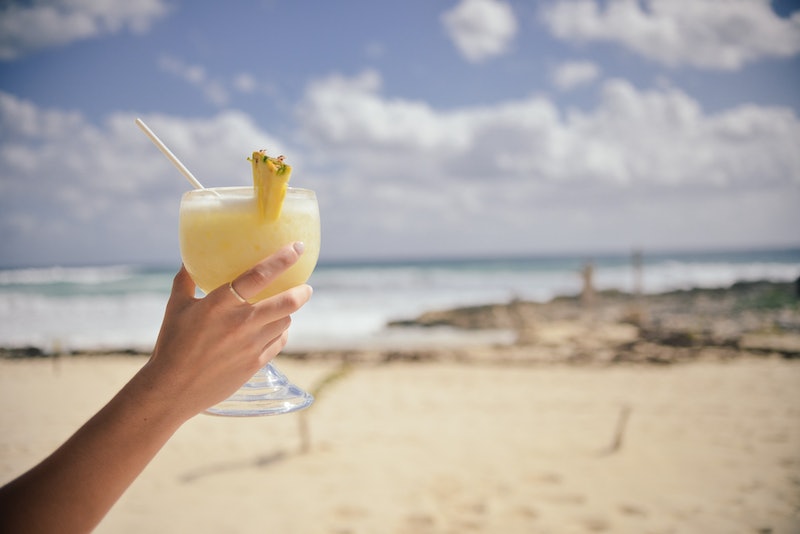 When I think about summer drinks, I think about icy Caribbean drinks — like a cooling Piña Colada on the beach. Typically, when I think of a Piña Colada, I don't think about my morning tea game. This summer, that's going to change though, because after I found out about what's in Starbucks' new Teavana Piña Colada tea drink, I officially went all in, because this drink is literally vacation in a cup. There's nothing I'd rather take with me on my morning commute than something that makes me feel like I'm on an island somewhere in the Pacific Ocean. I've literally never had a Piña Colada off the beach, so I know that when I'm sipping it on the subway or in a meeting, or on my way to the gym, I'm going to feel like I'm giving myself some special treatment. Which is fine, because I deserve it, and so do you.

Starting Mon., Jul. 24, 2017, you can officially enjoy the most tropical version of Starbucks' Teavana Shaken Iced Tea Infusions with their new Piña Colada tea infusion. Looks like beachy mocktails and your morning tea do go together! Though it might not be an obvious match made in heaven, you'll just have to try it to believe it. The refreshing earthy flavor of tea, mixed with the sweet tropical flavor of Piña Colada really do complement each other perfectly.

The new tea special is a twist on the Teavana Shaken Iced Pineapple Black Tea Infusion. It's a creamy and tropical beverage crafted with Teavana black tea, pineapple fruit and botanical blend, and coconutmilk. Together, these ingredients come together to create this filling, sweet iced concoction that really, really works. Plus, it wakes you up, keeps you cool and totally gives that sweet tooth of yours exactly what it wants.

And best news ever: this drink is officially joining the permanent menu — it's not one of those specials that you have to freak out about getting your hands on. (Though if you still wanted to run and get one, no one's going to judge you. We all know how important that early Instagram shot of a new drink is.)