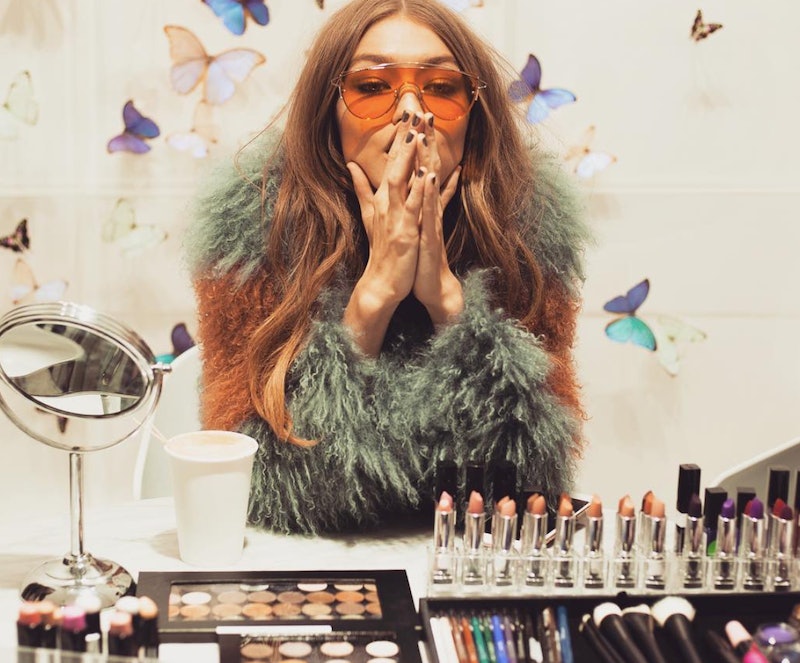 There is a beauty trend involving drugstore makeup brands and their celebrity spokespeople. Gigi Hadid has been a Maybelline model years, appearing in the brand's advertising and signage. Now, a Gigi x Maybelline makeup collection is happening and it was only a matter of time before she created or inspired her own range of products. Hadid wears the brand's offerings IRL, so she has intimately involvement with them. Therefore, her opinion and experience can inform a killer suite of products that ultimately benefits the brand's fans.

Hadid and Maybelline both shared posts on their official Instagrams on Sunday, Oct. 8, revealing that a collab has happened and is on the way.

Neither the model nor the brand confirmed exactly what the Gigi x Maybelline collection consists of, although we can see a series of bullet lipsticks in nude shades, a palette, powder products, and more in the teaser images.

They did, however, warn fans to "Get Ready."

There is a counter on the Maybelline site, which states the collection arrives in 12 days. That's less than two weeks. OMG, can you handle it? The collection also appears to feature some blush, highlighter, contour, and/or eyeshadow products in brights and neutrals, based on the products to the left of the counter.

This is the screenshot of the counter on the Maybelline site. Pay attention to Hadid's rosy glow in the image on the right, which was undoubtedly created with the products. Calculations indicate that Gigi x Maybelline will arrive on Saturday, Oct. 21. You can sign up via email for further details and to be alerted when the collection drops. You should do that RN.

Hadid revealed that the collection was a year in the making in the caption of her own Insta post, which suggests that a lot time, effort, energy, and passion went into this collection. One would think that Hadid didn't just allow the company to slap her name and signature on the packaging. It's probable that she rolled up her fashionable sleeves and offered her invaluable input and insight in all aspects of the collection.

Hadid's '70s-inspired look here, from the amber aviators to the center-parted and bedhead locks to the fuzzy jacket, suggests that her Maybelline collection will reflect the rock 'n' roll aesthetic of that era. Anyone else feeling that greige manicure she is slaying in this pic, as well?

But we'll have to wait and see once the full collection is officially revealed.

Fans are so ready for this.

In addition to Hadid's bombshell, Old Hollywood red lips in this image, she appears to be consulting with the Maybelline team about the collection.

Beauty obsessives and Hadid lovers are here for this collab. They are already, well, ready!

Excitement is the general reaction to this news.

It's not just text tweets, either! There was a flood of memes in response to Hadid's tweet about this news.

Regarding this trend, Katy Perry has created collections as part of her contract with CoverGirl, most notably the Katy Kat Mattes, which were bullet lipsticks that hit on the mega matte mouth trend. She also wore her Katy Kat Pearl Collection products to the 2017 Grammys.

While mass market brands have always hired models, actors, and singers as their spokespeople, it's not as common for said celebs to actually get involved in creating products.

But as we see CoverGirl expanding its ambassadors to include males, women of color, athletes, and people from a wide variety of backgrounds and ages, it's also refreshing to see spokespeople for brands act as more than just faces promoting the products. It's fun when they can indulge their more creative sides with branded collections.

Stay tuned to the collaborators' socials for the next two weeks for more intel about Gigi x Maybelline in the lead up to the collection's grand and anticipated arrival.