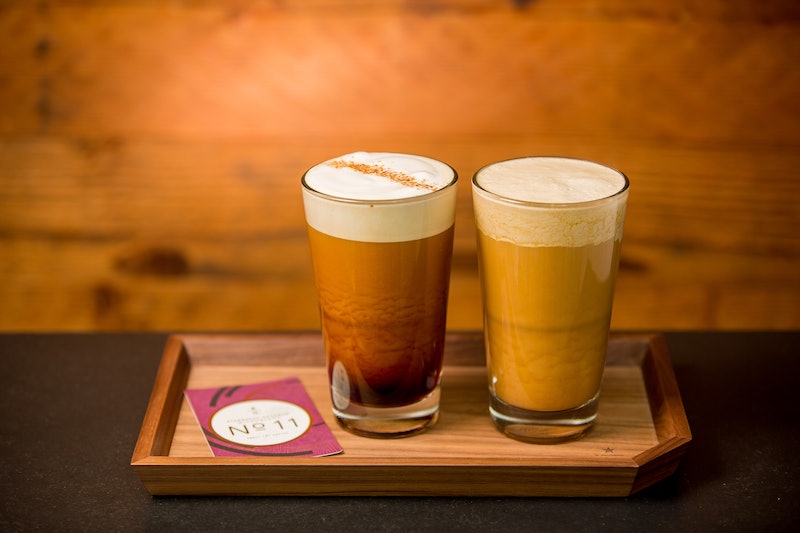 The world of exclusive coffee drinks just got even better. On Friday, Starbucks announced the creation of two more exclusive drinks: The Nitro Dirty Chai and the Nitro Cascara Cloud. When I first heard this, I immediately wanted to know what's in the Nitro Dirty Chai. According to Starbucks, it was created using Nitro Cold Brew taps, meaning this Starbucks drink is nitrogen-infused. Available at Starbucks Reserve bars in the United States and Canada starting July 11, the Nitro Dirty Chai is the perfect drink to get you through the mid-summer hump. Originally created solely for Starbucks' Reserve Roastery in Seattle, it was perfected and now is ready to be released on a greater scale.

Starbucks has been rolling out more and more Reserve bar locations in select cities within the United States, Canada, Latin America, Asia, Europe, and the Middle East. (Psst — you can find out if there's one near you here.) Even if you're not currently in a city that hosts a Starbucks Reserve, there's a chance you will be soon — Starbucks estimates Reserve bars will make up 20 percent of its locations by 2021.

But back to my original question: what is in the new Starbucks Nitro Dirty Chai? To understand, it's helpful to know that "dirty chai" means that the drink is created as a hybrid of coffee and tea. The rest is pretty simple.

Chai is the happy, sweet tea you wish could be in all your drinks. Thankfully, it's the first ingredient in this one.

Next, your chai tea is thickened with the help of some cream.

Finally, Starbucks adds in its premium brew to give you the perfect "dirty chai." Thus, your new addiction has been created.

Found a Starbucks Reserve bar near you? Go check out the Nitro Dirty Chai now. Its creamy texture and rich chai foam are sure to keep you going all day long.