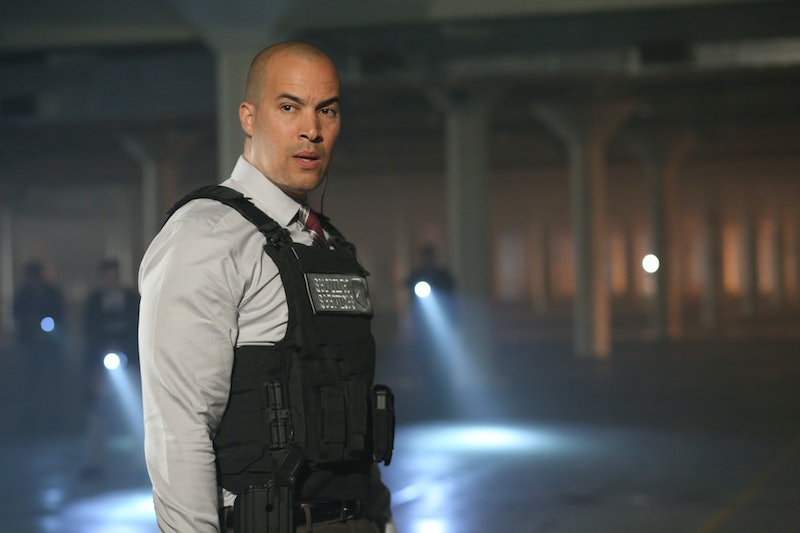 In FOX's new X-Men show, the threat our heroes face won't be coming from the metal-manipulating Erik Lehnsherr, as fans of the franchise might expect thanks to the multiple movies in which Magneto clashes with Professor X and his team of do-gooders. But what is "Sentinel Services" on The Gifted? The threat on the small-screen series, which premieres on Oct. 2, is decidedly more human in scale… although just as terrifying as any horror Magneto might unleash.

"The Sentinel Services are basically a high-level government agency that deals with mutant issues, mutant powers," actor Coby Bell (Burn Notice), who plays Agent Jace Turner in the FOX series, says in a promo video about the villainous anti-mutant organization. "They go around kind of operating above the law." Percy Hynes White, who plays superpowered young Andy Strucker, clarifies that "they track down mutants who have just surfaced in the world."

How do they track mutants down? That ability comes courtesy of the deadly machines that gave the agency its title. The Sentinel robots are "spider-like creatures that can detect the mutant gene," explains Bell. "The big thing about them is, they're just relentless. They're extremely scary." Emma Dumont, who plays the metal-manipulating Polaris, cautions: "You won't survive a Sentinel."

If the idea of a mutant-hunting machine — and the name "Sentinel" — sounds familiar, there's very good reason. The Sentinels have been a long-running villainous presence in the X-Men comic books ever since their introduction on the page in 1965; and they recently appeared onscreen in 2014's Days Of Future Past. In that time-travel film, audiences saw two versions of the murderous robots: a retro-looking but effective prototype in the 1970s timeline, and a much more streamlined and lethal version in the near-future timeline.

The reason some viewers might not immediately connect the dots between these two machines is because they look extremely different. While Days Of Future Past hew close to the source material by depicting the Sentinels as essentially humanoid robots, The Gifted has changed things up by transforming the Sentinels into creepy-crawly bug-like drones. They may not have the size or strength of the traditional Sentinels, but this new version is smaller and faster and is capable of grabbing onto a mutant's leg to prevent them from escaping, as seen in the promo clip.

While the Sentinels in Days Of Future Past had the ability to adapt to any mutant's abilities, rendering them virtually invincible — thanks to Mystique's magic shapeshifting blood — the Sentinels in The Gifted don't appear to share that mighty morphing power. However, they do share the same basic technology that allows them hunt down mutants wherever they might try to hide: the Sentinels can detect and track the mutant X-gene.

It makes sense that the Sentinels would look dramatically different on The Gifted than they did in Days Of Future Past, since creator Matt Nix is trying to set his small-screen series apart from the big screen franchise. "It's definitely its own thing," Nix said in a recent interview with The Hollywood Reporter. "Let me put it this way: the movies kind of did us a favor, by establishing that they don't have a strict timeline anymore," thanks to the way Days Of Future Past futzed around with history.

"It gave us a lot of freedom to say we exist in our own universe that's related to everything that's gone on," Nix continued to THR. "It's not like we're not conscious of it and we're not trying to undo or counteract anything from the people who haven't seen the movies, but we do get to do our own thing while still nodding to stuff that people care about, and that we care about in the movies and the comics."

So are the spider-bots simply a complete re-imagining of the Sentinels? Or are they an earlier version of the technology that will eventually evolve into the towering bipedal robots that all but wipe out mutantkind in the future? The intriguing thing about The Gifted is the way it's totally throwing out the rulebook when it comes to continuity within the X-Men franchise. No matter how well-versed you are in the comics or the films, there's no predicting where The Gifted will go next.