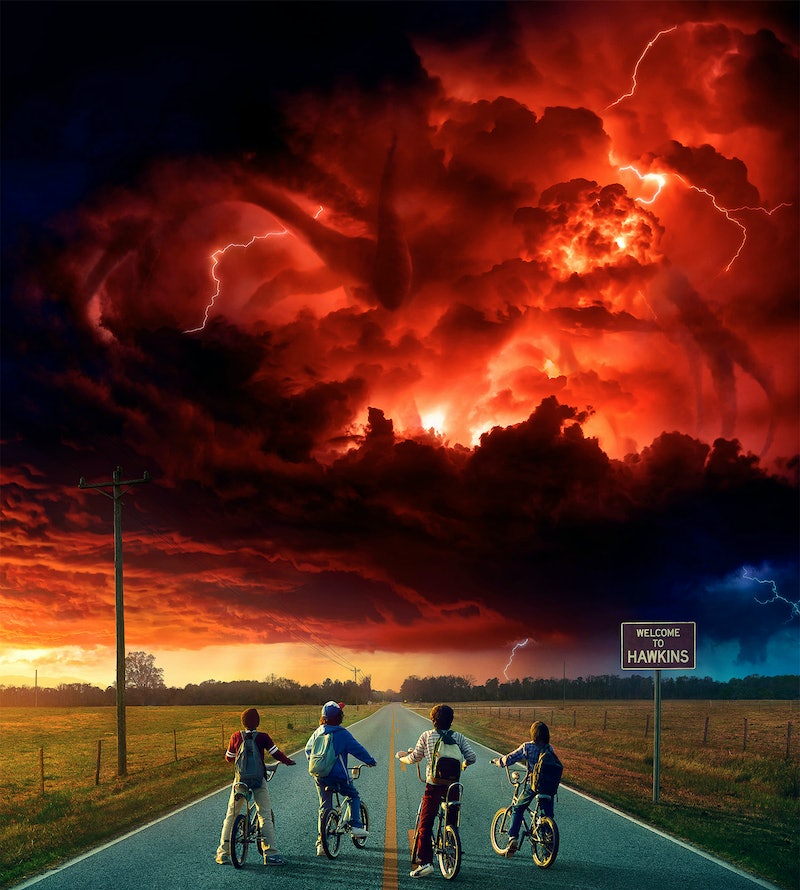 Sequels are known for going bigger, but that's extra true of Stranger Things Season 2. Spoilers ahead. There's no telling what the Stranger Things' Shadow Monster is or what it wants, and it definitely doubles down on the threat posed by the Demogorgon in Season 1. In Season 2, Hawkins is threatened by a massive looming Shadow Monster with giant, smoky tendrils, who lives in the Upside Down. While the Demogorgon may have succeeded in taking victims one by one, the Shadow Monster seems to have the ability to wreak havoc more quickly. While fans still don't know what it wants, one thing that's clear is that this creature means trouble.

Will first sees the Shadow Monster nearly a year after his first visit to the Upside Down. He troubles his mother when he occasionally flashes back and forth between his own world and the nightmarish parallel dimension that the Demogorgon took him to. And when he does he sees something that almost defies description. All that's known about this monster is that it is black and it is huge, but beyond that there is no way to tell what the Shadow Monster is. However, it's hinted that many of the other strange occurrences in Hawkins, including the Demogorgon, are directly related to the Shadow Monster.

This more threatening creature reveals itself to Will at the same time a few other strange things start happening in Hawkins. Will's temporary visits to the Upside Down are getting more frequent, and the pumpkins of Hawkins are starting to rot. The Shadow Monster's intentions aren't revealed until about halfway through Season 2, but considering that the monster only appears in the Upside Down accompanied by giant red streaks of lightning, it's no surprise that this it isn't friendly.

Eventually, Will gets possessed by the Shadow Monster after following some well-intentioned advice from his mom's new boyfriend. Will learns that there are times where sticking up for yourself is the right thing to do, but being chased by a living abomination the size of a skyscraper is not one of those times. After Will has been possessed by the monster, he reveals that the monster only wants one thing: "Kill." The Monster has a thirst for death, and seems to have plans to feast on Hawkins, Indiana. Armed with a tunnel system covered in living vines beneath the town and an army of demodogs, there seems to be nothing that can stop this Shadow Monster.

Why are scientists at Hawkins Lab trying to study the Shadow Monster? Could The scientists end up accidentally making their own? Could the shadowy smoke monster from Stranger Things beat up the shadowy smoke monster from LOST? Season 2 ends with the Shadow Monster still looming over the town of Hawkins as it appears in the Upside Down, so it looks like it will be a while before these small-town folk are free of its threat.

More like this
Kate Bush Revealed The Real Meaning Behind 'Running Up That Hill' Lyrics
By Darshita Goyal
‘Squid Game’ Creator Hwang Dong-Hyuk Just Dropped A Major Season 2 Tease
By Brian Anthony Hernandez and Bustle Editors
Nicola Coughlan Shared A Lady Whistledown Excerpt From ‘Bridgerton’ Season 3
By Grace Wehniainen, Alyssa Lapid and Sam Ramsden
Devi Is Going To Meet A “Smoldering Bad Boy” In ‘Never Have I Ever’ Season 4
By Jack Irvin and Gabrielle Bondi
Get Even More From Bustle — Sign Up For The Newsletter