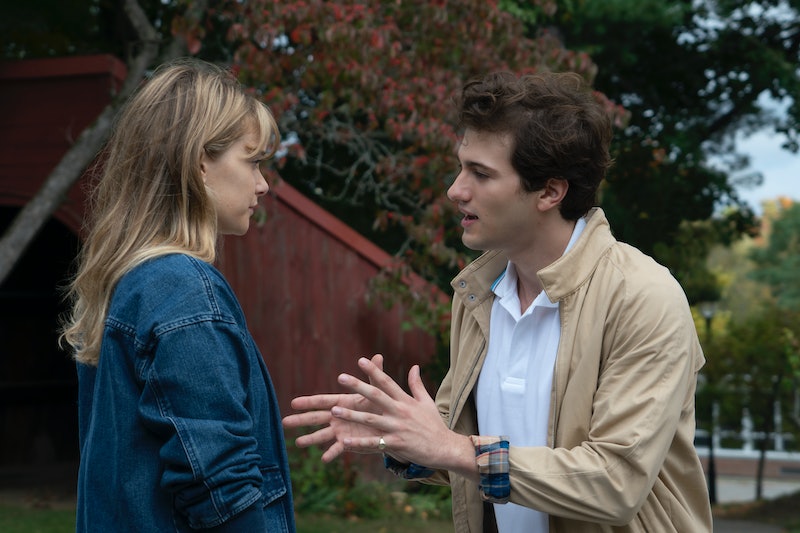 Spoilers ahead for The Society Season 1. In a spooky moment of dramatic irony, the final scene of The Society's first season revealed a key piece of information that Allie, Will, and the rest of the teens trapped in New Ham still don't know. West Ham still exists, time has continued to move forward in their old town, and all of their parents are still there. But there remains one looming question, the answer to which could explain everything: what was that smell on The Society, and what does it have to do with what happened to the teens?

Before the events of The Society started, a suspicious smell settled over the town of West Ham. It went away for a while, but then it came back. The show picks up right when the smell returns. So, the teenagers of the town are bussed away for a "field trip" while the smell is resolved — only to be bussed back minutes later to find that their parents have suddenly vanished, and a thick forrest has grown around the town's perimeter, trapping them inside.

In Episode 2, Sam discovers some correspondence from his father and uncle addressed to a man named Pfeiffer. They were refusing Pfeiffer's demand for $1.5 million in order to remove the suspicious smell that was lingering over West Ham.

Later, Kelly notices the bus driver in the background of a photo, and realizes that she and Harry actually saw him before, arguing with Sam's dad and Uncle Rodgers. Once Sam fills them in on what he found earlier, the kids surmise that the man is Pfeiffer, and he's the one that brought them all to New Ham.

While The Society hasn't revealed the true cause of the smell just yet, there is one possible scientific theory that could explain it. According to Science Mag, molecules of smell each have a specific shape, which then connects to certain smell receptors in the nose. Those receptors send a signal to the brain, triggering the smell.

However, according to the BBC, scientist Luca Turin of the Fleming Biomedical Research Sciences Centre put forward a theory on smell that relates to quantum physics — and that could also relate to The Society. Turin points out that it's possible to have molecules with different shapes that produce the same smell. He gives the example of hydrogen and sulfur, which can take many shapes but consistently smell of rotten eggs, and suggests that it's not the shape of a molecule, but the molecule's vibration, that triggers smell.

The BBC notes that the theory is still considered divisive and lacking in evidence, but whether or not it is true in reality, it could apply in the world of The Society. The teens haven't confirmed it for sure, but so far, all signs point to them being in an alternate dimension. So if Turin's theory is correct, then maybe the suspicious smell has something to do with the different vibrations surrounding the portal between the two different dimensions of West Ham and New Ham.

It sounds a little far-fetched, but then again, this is a world where solar eclipses happen years ahead of schedule and teenagers get lost in parallel universes. Anything's possible, right?

More like this
If 'Entergalactic' Season 2 Happens, You Could Get A New Kid Cudi Album
By Kadin Burnett
Watch The Thrilling Teaser Trailer Of 'Shadow And Bone' Season 2
By Gretchen Smail and Jack Irvin
Here’s Where You Can Stream 'Schitt's Creek' After The Comedy Leaves Netflix
By Brad Witter
Jeffrey Dahmer’s Arresting Officer John Balcerzak Got His Job Back After Being Fired
By Grace Wehniainen
Get Even More From Bustle — Sign Up For The Newsletter