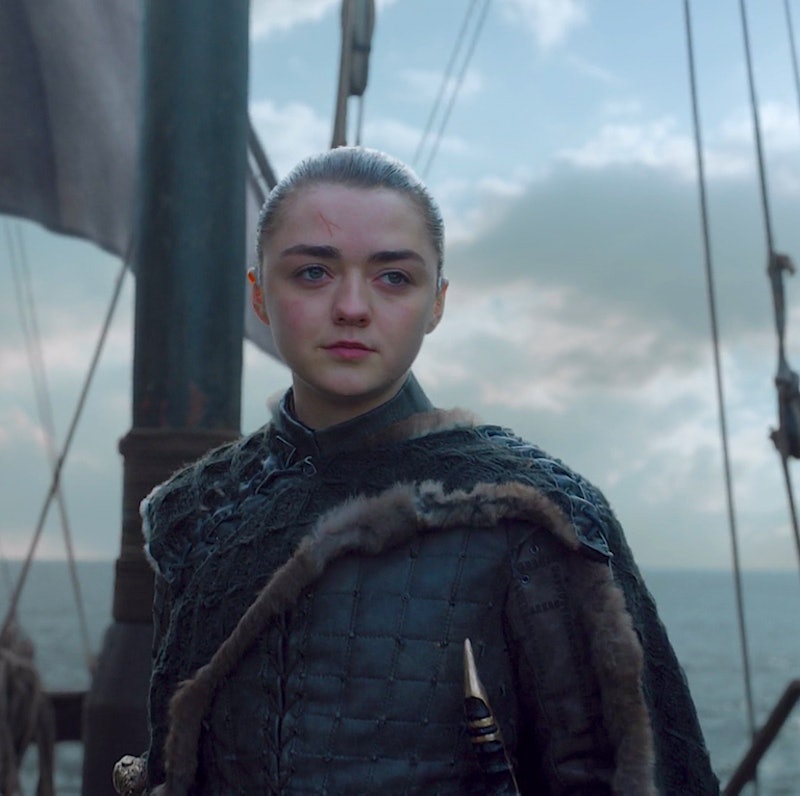 Spoilers ahead for the Game of Thrones series finale. Arya Stark has always had a curious mind, but the Game of Thrones finale shows her following through on that curiosity with a risky voyage to the West. Arya has been pondering what is west of Westeros on Game of Thrones for a few seasons now, and while fans may never get that answer, Arya may soon discover that there's more than water past the Sunset Sea.

There hasn't been much talk in Game of Thrones about geography beyond the most crucial settings of the show. While fans have gotten familiar with Westeros and the Free Cities of Essos, the show hasn't offered detailed looks at locations that are mentioned in the Song of Ice and Fire books such as the eastern Essos cities of Yi Ti and Asshai, or the entire continent of Sothoryos.

While those locations remain a mystery to fans, the details of what lies beyond the Sunset Sea are so fuzzy that none of the show's characters can say with any certainty what fate awaits Arya — even Bran, all-knowing as he is, has nothing to offer her in regards to any islands she may look to for safety. Fictional ASOIAF author Samwell Tarly hasn't said much about what lies west, but real ASOIAF author George R.R. Martin said himself in 2000 that "No one has ever crossed the Sunset Sea to learn what lies on the other side." However, there are some clues in the books that suggest Arya may find something as she travels west, even if she just ends up going to the East.

George R. R. Martin has confirmed that the world in ASOIAF is round, and that Westeros is on a planet larger than Earth. So technically it's possible that Arya could end up on the other side of the known world, such as in the mysterious Shadow Lands of Essos and the city of Asshai, where Melisandre hails from.

It's possible, however, that Arya may not be the first person to make it around the globe. In the novel Fire & Blood, released in 2018, Martin tells the story of Elissa Farman, who 250 years prior to the events of Game of Thrones sailed west from Oldtown on a ship called the Sun Chaser to learn what was west of Westeros. She never returned, but years later a man by the name of Corlys Velaryon visited the city of Asshai and claimed he saw a ship docked there that marked a strong resemblance to the Sun Chaser, suggesting that Elissa had discovered that the world of ASOIAF is round and that going west will take one to the East.

While going West may lead sailors to Essos, one of Elissa's traveling companions, Eustace Hightower, returned to Westeros on his own ship and told others that there is land to be found that isn't Essos in the Sunset Sea. He claims that he and Elissa had come across three uninhabited islands filled with unfamiliar fauna, spices, and animals that Elissa named Aegon, Rhaenys, and Visenya. Martin has clearly spent time thinking about just what the consequences of sailing west of Westeros are and what can be found in the Sunset Sea — perhaps the books will extend beyond the show's ending for Westeros' sneakiest Stark and allow viewers an opportunity to follow Arya on her journey to discover what lies beyond the horizon of Westeros.