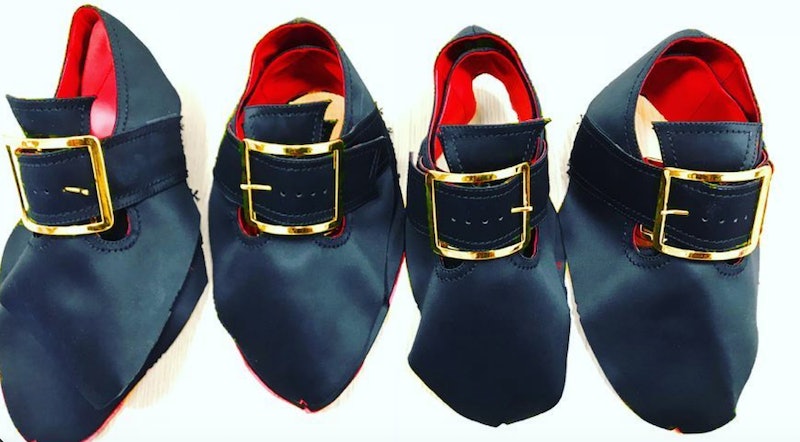 Kat Von D-evotees have been patiently waiting for her Von D Shoes vegan shoe line to fully materialize. The celeb tattoo artist and makeup mogul has kept fans in the loop throughout the creation (and creative) process thus far, sharing bits and pieces of the designs and all of the fab details. The latest tease and prototype will have you eagerly setting aside cash for when the footwear is finally available. The shoe status remains #ComingSoon. But the newest clue proves that Von D Shoes are one step closer to becoming a reality.

It's not even about the shape, silhouette, or heel height for the KVD vegan shoes. It's about the details, all of which are super specific.

Even noted (and fictional) shoe maven Carrie Bradshaw would be picking her jaw up off the floor over this footwear. It's that good.

Von D shared the upper design for her forthcoming satin witch shoes — complete with buckles that would make the Wicked Witch of the West of The Wizard of Oz fame proud. Or jealous! Von D also noted that the witch shoes will be mounted and take more of a pointed-toe shape upon completion. The depiction isn't even close to the finished product. But it's those buckles that are everything.

They really are the aesthetic icing on the cake and are that which elevates an already fantastic-looking shoe to "next level."

It's a harbinger of what's to come — and it's going to be awesome. These are so gloriously goth and you can wear them well beyond Halloween!

The buckles are replicas of the true Victorian versions that Von D found at an antique store and had been hoarding, per the caption. She recreated them for the "perfect Victorian-style witchy shoe." She is sharing the fashion wealth by incorporating them into a pair of Von D Shoes.

Von D also shared another shot of the gun metal cross-shaped zipper pulls for the vegan leather combat boot she designed. Those have the "Von D" name and logo stamped along the length of pull.

She previously shared this design element — only these had a gold cast and were inverted.

While Von D is obviously putting so much care into the designs and she has a clear and distinct vision when it comes to the shoe shapes, she is really going all out with details that match her familiar and beloved aesthetic. Every feature of the shoes is lovingly considered.

Of course Von D's commitment to the line being vegan and cruelty-free is firm AF. If your animal sympathies extend to your footwear, Kat Von D is doing her best to make sure she supplies you with shoes that are stylish and don't bring harm to any animals.

So, based on cumulative teases, we know we are getting witch shoes with Victorian buckles and combat boots with cross-shaped zipper pulls. We know that a gold KVD logo will be placed underneath every high heel.

There are plans for vegan crocodile open-toe pumps.

There will be patent leather, concealed platform Mary Janes. That candy apple red hue, though!

There are foil x metallic ankle strap platforms with open toes and chunky heels, too. Are you totally shaking and crying with excitement over these shoes?

There hasn't been a Von D Shoes update on the brand's official Instagram feed in over two months. That's OK, though. It's best to let the team hunker down and get the designs finished and produced. That said, KVD took it upon herself to do so on her personal feed, which has millions of loyal followers. We are only seeing advance mock ups yet Kat Von D-evotees are already all in.

The pricing, shopping locations, and full run of colors and shapes are TBA. We'll be here waiting — happily so!