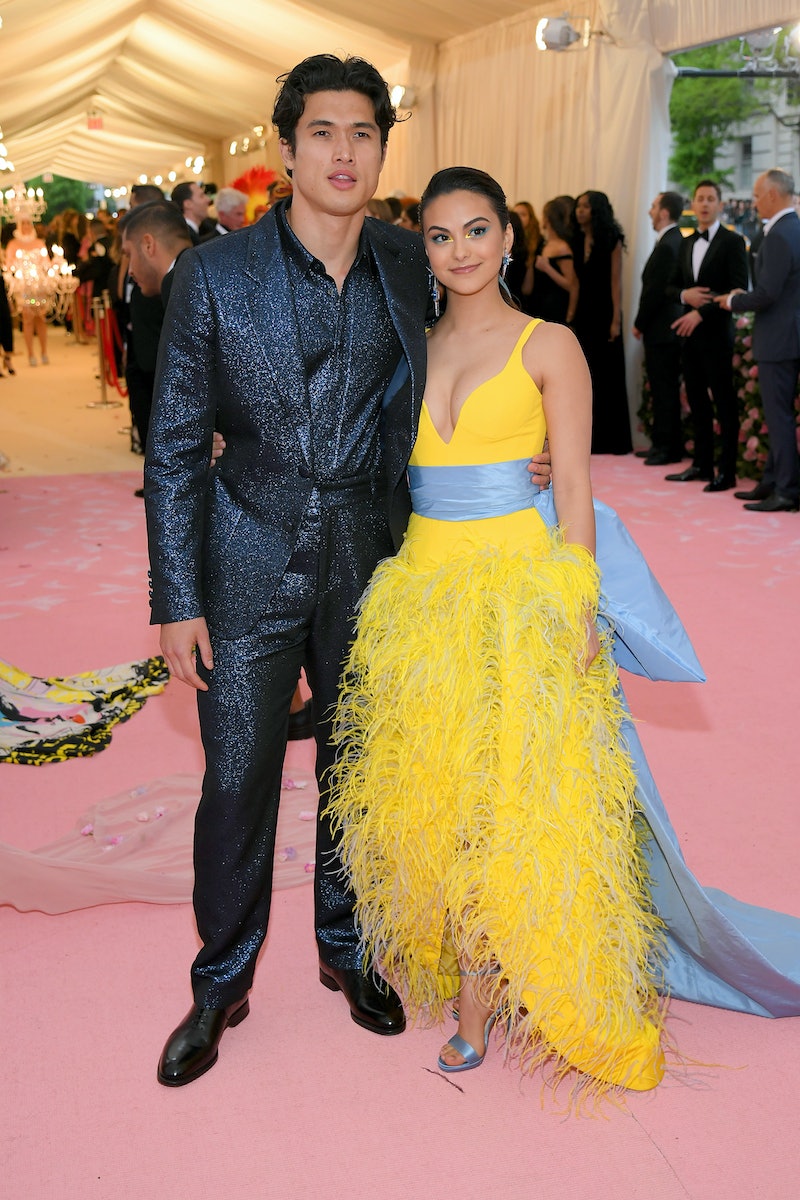 Riverdale's Reggie and Veronica may go through relationship ups and downs, but off screen, the actors who play them are totally comfortable with each other, and seemingly drama-free. So, how long have Charles Melton and Camila Mendes been dating? They confirmed their relationship last October, and they've been going strong ever since.

Rumors that Melton and Mendes were dating first started in September, when they were seen together on a few outings. A fan reportedly saw the Riverdale stars together at a movie theater, E! News reported at the time. And in an Instagram photo Mendes posted on September 3, she and Melton are snuggling up on a towel together.

The couple's official relationship confirmation, though, came the month after that. On October 7, Mendes posted a photo of her and Melton hugging, with her costar planting a sweet kiss on her nose. And her Instagram post left little question that it was more than a friendly embrace: She captioned the photo "mine." A week later, Melton posted another picture of the two of them together, this one with a heart emoji as the caption. And since then, the neither actor has been shy about sharing couple photos on their respective Instagrams.

Mendes also talked about her relationship with her costar during an interview with LA Confidential published in March. But it sounds like there are some details she wants to keep private.

"In my day-to-day life, I am an open book. But I've also developed this sixth sense. I understand how my spoken words can translate into written words and how things can appear out of context," Mendes told the outlet. "It's like, yeah, even though I feel comfortable talking about some things, do I really want to see it written over and over again? Sometimes, it's not really worth it." She did confirm to the magazine, though, that working with her partner on Riverdale is "great."

More recently, Melton suggested that Mendes inspired his performance in the upcoming The Sun Is Also a Star. Melton's character, Daniel, is an aspiring poet and a romantic at heart, and it sounds like his relationship with Mendes helped him tap into the romantic side of things.

"I may or may not have been thinking about — when I auditioned, when I was doing my research — a certain relationship," Melton told Cosmopolitan, referring to his audition for the movie. "Thinking about, you know, kind of how I'd be."

Melton also praised Mendes' Riverdale acting during an interview with Refinery29 in January. "She's such a professional, and she's such a talented actress. It's very easy working with her in scenes," he told the outlet of his partner and costar.

Most recently, Melton and Mendes attended the Met Gala together, alongside their fellow IRL Riverdale couple Cole Sprouse and Lili Reinhart. And in March, the Daily Mail reported that Mendes had moved into Melton's Vancouver apartment.

Plus, Melton recently told People that he writes love letters to Mendes, which really couldn't be any cuter. "Something romantic that I do is I write letters to my girlfriend," he told the magazine. He also admitted that he believes in love at first sight, something else he seems to have in common with his The Sun Is Also a Star character.

Mendes and Melton are clearly super supportive of each other's endeavors. And she'll likely be a huge supporter of her boyfriend's upcoming movie, which hits theaters on May 17.