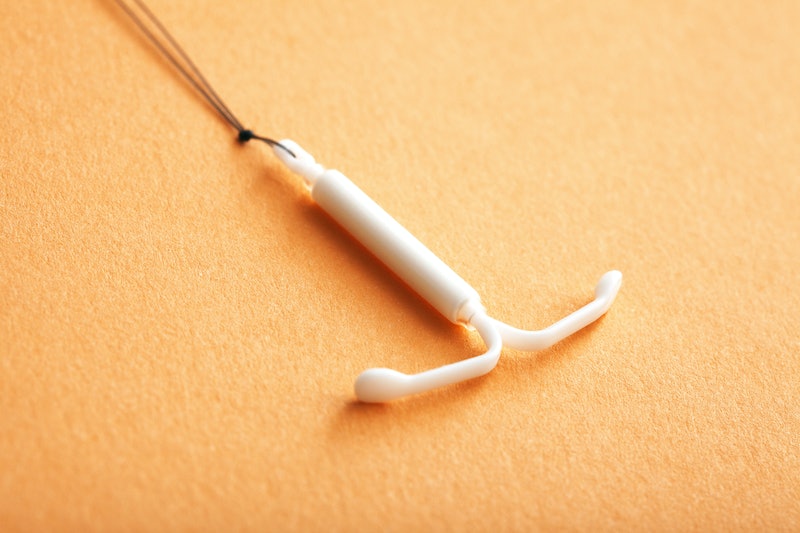 “IUDs are making a serious comeback.” I say to a girlfriend over a Sunday morning walk.

“I thought IUDs were a new thing. Didn’t you just get one?” she asks me. It suddenly occurs to be that IUDs do feel new; this once retro form of birth control was relatively unknown when I was a teenager. I didn’t even hear of this option until I was at my first job at 23.

I caught myself pretending I knew everything about these devices when chatting with my friend, but my knowledge was relatively limited … and I have an IUD. Why is that? Why now? Women everywhere are in a rush to get IUDs, due to the uncertain political climate. I was among them. I got an IUD in January, just before Trump took office and documented my experience.

"Even before the Trump disaster, an IUD has been for many women the best method of contraception in terms of safety, reversibility, and efficacy," Dr. Lauren F. Streicher, MD, Clinical Associate Professor of Obstetrics and Gynecology, Feinberg School of Medicine, Northwestern Memorial Hospital, tells Bustle. "By getting an IUD now, they will be protected for 3-10 years depending on which one they choose. Possible defunding of Planned Parenthood will make access even more limited. If Roe is overturned, not only will abortion become illegal, but many types of birth control as well (such as IUD’s) since far right extremists such as Mike Pence put their own personal beliefs above science."

I stepped into the OB/GYN ready to have this implant inserted through my cervix and into my uterus without even doing that much research on the effects. I just assumed everything was going to be fine. Having an IUD is hip now — it’s cool.

According to a 2013 survey from Planned Parenthood, IUDs are the #1 choice of OB/GYNs for birth control. “I think the best candidate for the IUD are women who do not want to get pregnant for at least the next two years,” Dr. Fahimeh Sasan, Consultant Medical Doctor at Progyny and OBGYN at Mount Sinai tells Bustle. “It's a great form of contraception because it doesn’t require you to do anything—once the doctor places the IUD you are all set."

The recovery process from my procedure was arduous and painful. I didn’t feel OK for over two weeks. Even though I’m fine now, I still have questions about the IUD and why everyone's so obsessed with it.

Due to my own neurosis, I've become hell bent on knowing everything there is about the intrauterine device … including its history. In case you too want to know, here is a brief history of the accidental winding road that lead to modern day IUDs — and our recent interest in getting implanted.

IUDs Date Back To The Victorian Era

When I think of birth control, I don’t think of the Victorian Era, but the history of birth control does go back further than you might think. IUDs were first invented in 1862 and the diaphragm in 1882.

The early invention of the IUD was not intentionally feminist. They were not originally designed to prevent pregnancy, but were meant to treat vaginal infections and injury such as prolapse, pregnancy prevention was somewhat of a happy accident (for us ladies, anyway). According to the Sexual Health Charity in the UK, “These were small button/cap shapes attached to stems, made of a number of different materials, which extended into the cervix.”

In the 1930s, smaller and safer IUDs (Ota rings) were introduced. These silver rings were far more effective than their predecessors at preventing unwanted pregnancy.

During the Sexual Revolution of the 1960s, IUDs were recognized as medically safe forms of birth control, and the copper IUDs we still use today hit the scene in 1962. See, you really are vintage after all.

IUDs lost popularity as hormonal birth control pills hit the market in the '60s. As Vouge points out, the pill was easier to get than an implant — making it the preferred form of birth control into the early 2000s.

IUDs became truly controversial thanks to, the Dalkon Shield in the '70s. This notorious IUD allowed bacteria to enter the uterus and was allegedly the cause of death of 18 women do to infection. Nothing like 300,000 lawsuits and claims of death to deter someone from using an IUD, amiright?!

Now that memories of the Dalkon Shield are beginning to fade, and hormonal models like the Mirena and Skyla are down to a science, IUDs are finally making a glorious comeback.

Since the election in January, IUD demand has spiked 900 percent. It makes sense — IUDs can last 3-10 years. If something happens to your insurance and birth control pills, you’d be kind of f*cked, but an IUD could outlast a Trump presidency.

Are We Going Fully Natural In Every Aspect Of Our Lives?

Whenever I ask a friend why she favors an implant, it’s always a similar answer, “I don’t want all of those hormones in my body. It’s not natural.”

Is an IUD just the next phase in our Millennial quest to be fully organic and all natural? Is placing a foreign object inside your uterus the best option? Have we gotten so entrenched in all things vintage or are we just reveling in the upgraded models of the past? There are certainly benefits. For instance, I recently wrote about the impact IUDs have on sex drive. Indeed, having a reliable form of birth control can relieve a lot of stress, but as many experts point out, the best birth control for you ultimately depends on you.

The controversy around contraception, the female body, and what is safe is far from over and as we move into the future, we have to take a dose of history with us so we don’t slip backward.

As for me, if I can have something popped into my uterus that allows me to have control over my reproductive system, I’m in.