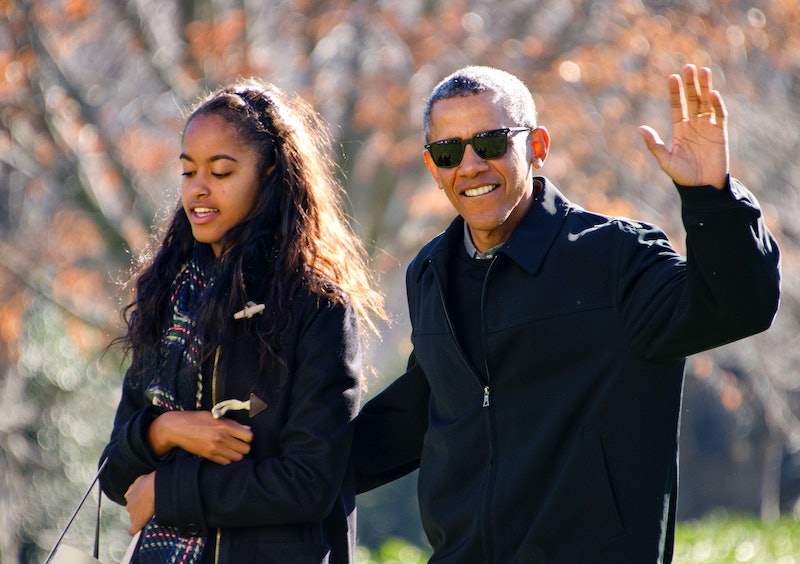 As news breaks on media mogul Harvey Weinsten's alleged sexual harassment stretching back decades, it's alarming to think how many women may have passed through the doors of what accusers claim was a toxic work environment. One young lady who just added The Weinstein Company to their resume? Malia Obama, Barack and Michelle's eldest daughter. When Malia Obama worked for Harvey Weinstein, she was 18. To be clear, Obama is not one of the women accusing Weinstein of sexual harassment. A statement from Weinstein’s lawyer to The New York Times states, “He denies many of the accusations as patently false.” Weinstein also released a longer statement to the Times that said in part:

UPDATE: According to The Hollywood Reporter, attorney Charles Harder says Weinstein is planning to sue the New York Times. The statement reads,

"The New York Times published today a story that is saturated with false and defamatory statements about Harvey Weinstein. It relies on mostly hearsay accounts and a faulty report, apparently stolen from an employee personnel file, which has been debunked by 9 different eyewitnesses. We sent the Times the facts and evidence, but they ignored it and rushed to publish. We are preparing the lawsuit now. All proceeds will be donated to women’s organizations."

UPDATE #2: Bloom also released her own statement to Bustle, which reads in part:

Harvey Weinstein and I have had many wide ranging conversations over the last year about rumors and allegations against him. He denies many of the accusations as patently false. Nevertheless, I have explained to him that due to the power difference between a major studio head like him and most others in the industry, whatever his motives, some of his words and behaviors can be perceived as inappropriate, even intimidating ... I have found Harvey to be refreshingly candid and receptive to my message. He has acknowledged mistakes he has made. He is reading books and going to therapy. He is an old dinosaur learning new ways. He wants to reach out to any of the women who may have issues with him to talk to them in a respectful, peaceful way, with me present if that is acceptable to them ... He is deeply bothered by his some of his emotional responses. He has been working on his temper for over 10 years and is chagrined the issue still plagues him. He recognizes he needs time off to focus on this issue and has much to learn. He wants to reach out to teachers with expertise in this area. Harvey is not going to demean or attack any of the women making accusations against him, although he does dispute many of the allegations. Instead, he is going to use this as a painful learning experience to grow into a better man.

EARLIER: Page Six first reported Malia Obama's internship back on January 19, 2017 as unconfirmed rumor, but the very next day, The Hollywood Reporter officially confirmed Obama had secured an internship. This isn’t the first brush the Obamas have had with Weinstein. In 2011, Weinstein held a lavish, star-studded fundraiser for Obama’s 2012 presidential run at the exec's Westport, CT mansion, and donated over $28,500 indirectly to Obama’s 2008 campaign through the DNC and their White House Victory Fund. According to Deadline: Hollywood, Weinstein praised Obama at the time, saying “You can make the case that he’s the Paul Newman of American presidents.”

Malia, meanwhile, had already made considerable headway into a film and television career before working with Weinstein, having taken a gap year before heading off to Harvard. Prior to her Weinstein work, she had already landed a Production Assistant position on HBO’s Girls and spent time on the set of Halle Berry’s sci-fi series Extant, both in July 2015.

Malia's job at The Weinstein Co. was reportedly fairly common entry level work that consisted of the teen reading through unsolicited scripts sent into the office. Sorting through the "slush pile," as the voluminous mass is called, is draining, often unrewarding work, but that didn’t stop Weinstein from promoting meeting the First Daughter as a potential perk when auctioning off another internship for over $15,000 in February 2017. As The Hollywood Reporter reports, a memo advertising the internship said it was a once-in-a-lifetime opportunity to “learn all the ins and outs of the movie biz, and maybe even run into Malia Obama while you're at it."

Malia’s gap year, and in all likelihood, her internship, came to an end August 2017, as classes began for Harvard’s graduating class of 2021. Which seems to be just in time, as news broke today of Weinstein’s alleged multiple instances of sexual impropriety, intimidation, and harassment. The cost for a year at Harvard is currently $63,025 a year for room, board and fees — according to the New York Times story, just under the amount (between $80,000 and $150,000) women in the settled Weinstein cases received.