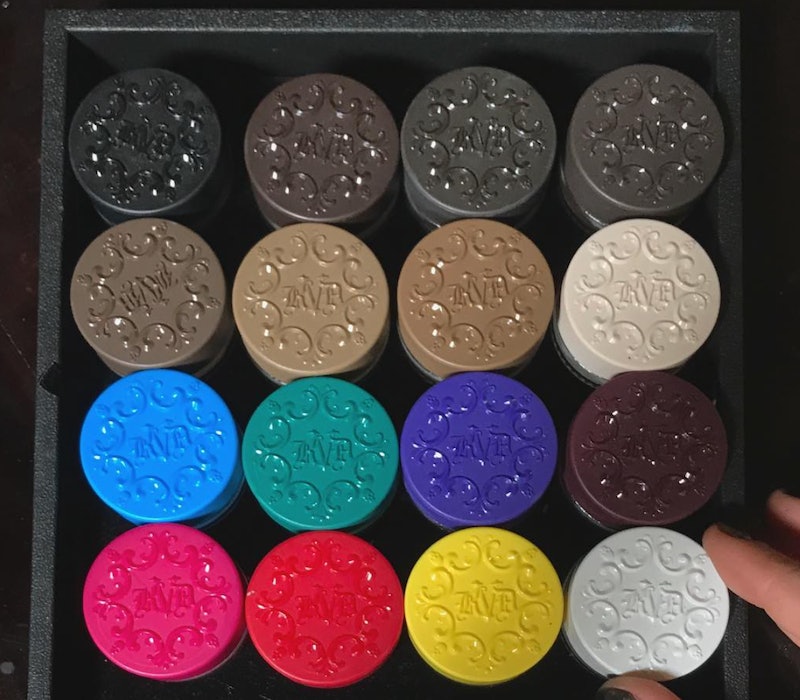 Over the summer, Kat Von D warned us that she would be changing the eyebrow game with her latest makeup innovation. It was a nebulous Instagram post that hinted at the packaging design of a new product, and the tease was meant to keep her loyal legion of fans on their toes. Now, Von D has followed up with more details and the forthcoming Kat Von D brow products appear to be better than you ever hoped for — because they'll give you rainbow brows.

The makeup maven and tattoo artist confirmed that she has three cruelty-free brow formulas launching in Spring 2018, and Kat Von D-evotees are totally here for them.

Describing them as "bulletproof" and "longwear," Von D posted a photo of 16 pots of Super Brow, which is a pigmented pomade. That means it'll serve two important purposes — to shape brows and to add color to them.

There are several natural brow shades, such as black, dark chocolate brown, light brown, bronze, amber, gray, and more. If it's a subtle, well-groomed, and neutral-looking brow you seek, that's what you're going to get with this product. But there are also plenty of adventurous shades, such as candy apple red, bright blue, hot pink, lemon yellow, bright white, and more.

The Super Brow is designed to match whatever hair color you may have. It's an inclusive collection, even for the most adventurous.

It's a rainbow of fruit flavors, er, brow pomades. Kat Von D-iehards expressed their fevered excitement in the comments section of the post. Of course they are already pledging to purchase Super Brow.

One user said it best — the mermaid beauty trend is well-repped with this set.

So many makeupistas are stoked that they can finally have matching coifs and brows and that KVD considered a bold color product for an unexpected feature.

Kat Von D Beauty has earned this sort of loyalty, with innovative, edgy, and quality products. That's why fans are "all in" without even seeing Super Brow in person.

In addition to Super Brow, there will be Brow Struck, which is a reflective powder, and Signature Brow, which is a precision pencil. The makeup extraordinaire is also releasing brow brushes. We already know how ace the brand's Everlasting Lip Liners are, so it's a safe bet that the team will be crafting the brow pencils with the same sort of attention to detail and quality.

Von D also posted a killer closer up of the blood red Super Brow. It's packed with pigment and packaged in the signature goth-inspired style that the brand is known for.

One can't help but agree with Von D's caption — this pot of brow pomade certainly makes you want to dye your hair to match. Red is a KVDB signature, and especially noteworthy for the vegan brand since red is difficult to create without carmine, which is extracted from insects.

Super Brow may also be effective as a cream liner, shadow, or a base that punches up any powder shadow placed over top. Perhaps it can be utilized as a lip stain or cheek flush, too. We'll know more as the brand reveals more details about the formula, since it's always best to use a product as intended and to exercise caution before doing so in a different way.

Super Brow won't be here until 2018 but that doesn't mean you shouldn't gawk at the tease mightily in the interim. Stay tuned to the KVD socials for drop dates, prices, and locations.