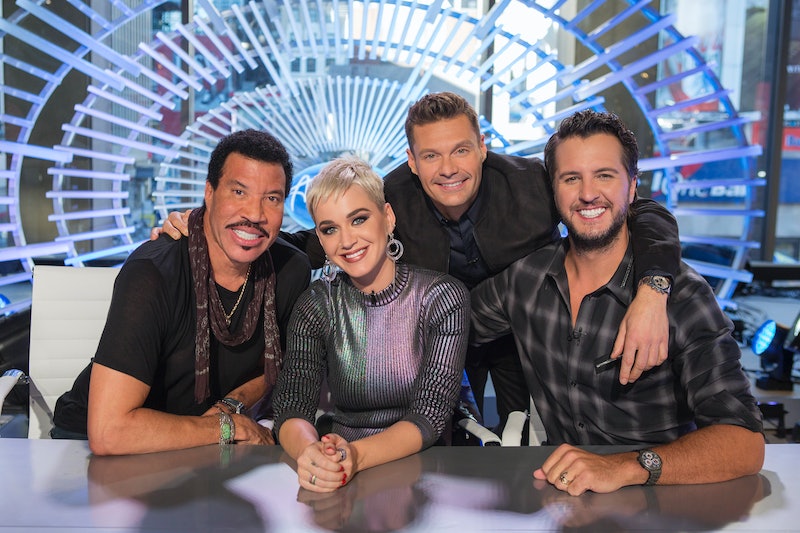 American Idol has undergone some major structural changes since moving from Fox to ABC in 2018, including the incorporation of new mentors, themed weeks, and most notably, three new judges. And when American Idol Season 18 premieres, it may be making some more. According to Variety, though the show has been renewed, there's no guarantee that its three judges — Lionel Richie, Luke Bryan, and Katy Perry — will return.

American Idol's renewal was officially announced on May 13, mere days ahead of the Season 17 finale (it's technically the second season, if you're only counting the reboot). Because both of the ABC seasons have premiered in early March, you can reasonably expect Season 18 to be back around the same time next year. However, by then, the judges lineup may look a little different. While Richie, Bryan, and Perry have demonstrated a clear passion for mentoring the Idol contestants over the last two seasons, Variety reports that they may have to take pay cuts in order to stick around, which could be a dealbreaker.

According to the outlet, ABC entered negotiations with potential new talent for the judges' panel on May 12. On May 13,Variety also reported that "an individual with knowledge of the negotiations said that offers have been made to all three [judges] to return but it remains to be seen if they will sign on again." The same report noted that the show's original host, Ryan Seacrest, is believed to be under a long-term contract, despite his first-ever absence from the show that occurred this season, for which series mentor Bobby Bones filled in.

The network is looking to keep Idol around long-term, Variety continued, as long as they're able to cut costs where it's necessary. The report described the show as performing "credibly but not spectacularly," with Sunday night episodes garnering "a 1.7 rating in adults 18-49 and 8.9 million viewers," ranking it as the network's second best performing unscripted series behind The Bachelor. The Monday night episodes fall slightly lower on the charts with a rating of 1.5 and 8.3 million viewers.

Overall, ABC is "hopeful" that Perry, Bryan, and Richie will all return for Season 18, network president Karey Burke told Deadline, but right now, everyone is focused on the finale. "We are in those conversations but right now, from our side and the judges, we're just focused on getting through Sunday and having a great night and we’ll be back in the conversation," Burke said.

The finale will feature special performances from all three judges, as well as Idol contestants past and present. According to Goldderby.com, Bryan will sing with Laci Kaye Booth to his hit single "Knockin’ Boots" and The Police's "Every Breath You Take"; Perry will sing a duet with Jeremiah Lloyd Harmon to her song "Unconditionally"; and Richie will join the Top 10's performance of "Dancing on the Ceiling." Not to mention, there will also be guest performances from Idol alums Adam Lambert, Carrie Underwood, and more.

Fingers crossed that Bryan, Perry, and Richie all stay in the Idol judges position, but if they don't, at least Sunday's finale means they'll be going out with a bang.

More like this
20 Years Later, Kelly Clarkson & 'American Idol' Judges Reunite For Her Hollywood Walk Of Fame Star
By Radhika Menon
Everything To Know About Taylor Swift’s 10th Studio Album, 'Midnights'
By Grace Wehniainen and Jake Viswanath
Is Dua Lipa Dating Trevor Noah? New Photos Show Them Kissing & Hugging
By Brian Anthony Hernandez and Martha Sorren
Twitter Is Freaking Out Over Rihanna’s 2023 Super Bowl Halftime Show Announcement
By Stephanie Topacio Long
Get Even More From Bustle — Sign Up For The Newsletter