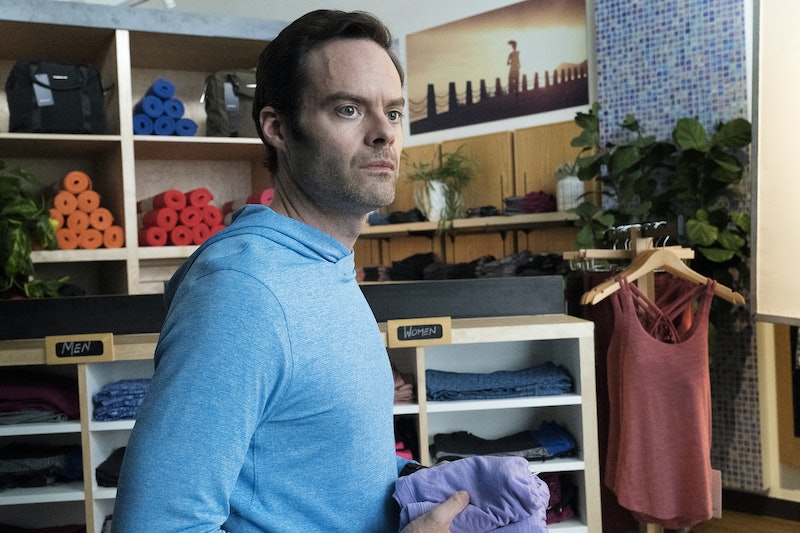 Light spoilers ahead for Barry Season 2. Everyone's favorite assassin (played by executive producer Bill Hader) has had a rough go of it on Barry Season 2, whose season finale airs Sunday, May 19, on HBO. Not only is he dealing with the aftermath of killing Detective Janice Moss (Paula Newsome) in the first season, but her coworker figured out what he'd been trying to cover up. Luckily, all Detective John Loach (John Pirruccello) wanted was to help him take out a hit on his ex-wife's new boyfriend, who just happened to be incredible at Taekwondo. And although fans will be happy to know that Barry will return for Season 3, per Deadline, no air date has been announced.

And although it's too soon to tell when exactly it will premiere, since Barry Seasons 1 and 2 premiered in March 2018 and March 2019, respectively, fans can reasonably assume it will return around March 2020. But whenever it does return, Season 2 has been even more exciting than the first — if that's even possible.

In the show's second installment, Barry met his toughest competition yet, between Sally's abusive ex-husband, his mentor Fuches turning on him, and the "feral mongoose" of a little girl he encounters in Episode 5, "ronny/lily." "[L]ast season Wade Allen, our stunt coordinator said, 'I have this young girl, Jessie, who's like 11 and she's amazing at karate and stuff. If you ever need a little girl in an episode, let me know,'" Hader told Collider. "I went, 'Oh, that's interesting.' Then...I just had this thought of Barry in a house and this little girl in the karate gi and you think, 'Oh God, he's gonna have to kill this girl.' And then she lunges at him and beats the sh*t out of him."

However, things get even further complicated when Fuches decides to frame Barry's mentor, Gene Cousineau, for Janice's murder. "We knew kind of early on that we wanted Fuches to take Cousineau out to Janice's body," Hader told TV Guide. "That was a thing we always wanted to write towards."

Hader, who directed the Season 2 finale, warned that it gets dark in the finale episode. "[I]t was hard, because you're trying to wrap up a lot of the storylines or see where they're going to be progressing, and we just have a lot of characters for a 30-minute show," he told the outlet. "So you're trying to service all these things."

As for what fans can expect from Season 3, it's a bit too soon to tell. What's more, it may all depend on what happens on Sunday's season finale. That said, it's no surprise that Barry was renewed for a third season. It's nearly universally loved by critics, and Bill Hader is a familiar face — not only from his time on SNL but with roles in The Skeleton Twins, Trainwreck, and Inside Out, among others. Then there's everyone's favorite villain, NoHo Hank, whom Barry finally cut ties with this season (but hopefully he comes back, because the way he pronounces "Barry" is unparalleled).

So whatever happens between Gene, Barry, and Fuches in the Season 2 finale, at least audiences can rest assured that the show must go on.