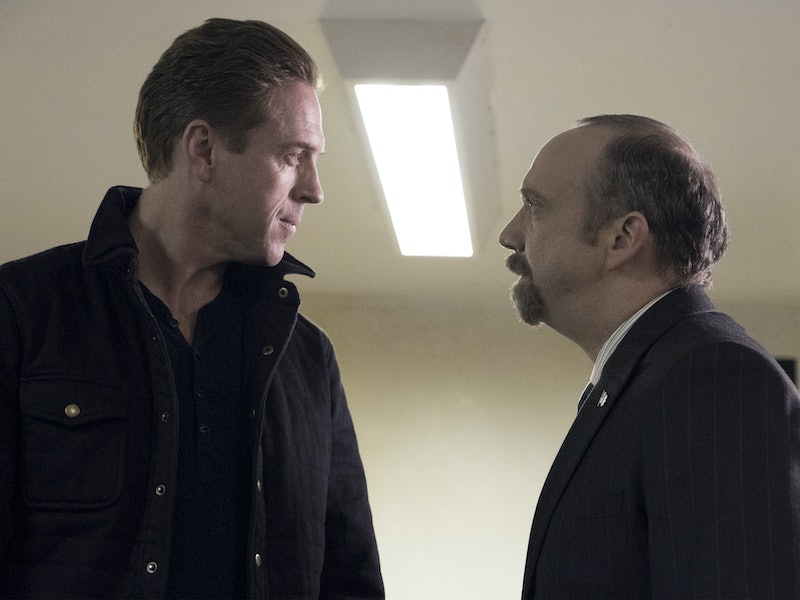 The war between Chuck Rhoades (Paul Giamatti) and Bobby "Axe" Axelrod (Damian Lewis) was as intense as ever in this season of Billions, but one battle is about to come to an end. The Season 2 finale of Billions airs Sunday, May 7 at 10 p.m. ET, and you know you're going to want to see where their feud stands by the end of this installment of the Showtime drama. The preview clip for the Season 2 finale has me thinking that anything is possible — and I'm just a little bit scared, too. Hopefully, some of fans' burning questions will be answered in the Season 2 finale, but if not, here's hoping that they will be when Billions returns for Season 3.

Luckily for you, the fate of the show has already been revealed. Showtime announced in March that it had renewed Billions for Season 3, as reported by Deadline. “Billions continues to be a show on the rise, growing not only in audience, but in critical buzz and cultural relevance,” Showtime Networks President and CEO David Nevins said in a statement. “It offers a unique mix of pure entertainment with sly commentary on our current have/have-not economy. Season 2 is off to a tremendous start, and has only whetted our audience’s appetite for what will come in Season 3.”

The Deadline report also said that Season 3 is expected to debut in early 2018. Though Showtime has not yet announced an official premiere date for Season 3 of Billions, it seems likely that the series will return sometime in Winter 2018 since its first two seasons premiered in January 2016 and February 2017, respectively.

For now, you can rest easy knowing that the creative team behind Billions has already started work on Season 3. The show's co-creator and executive producer, Brian Koppelman, recently confirmed on Twitter that they've already begun writing next season, and that like Seasons 1 and 2, Season 3 will also feature 12 episodes.

Koppelman also revealed on Twitter that the "[t]hird season has "one cameo LOCKED IN already!" With past cameos including Metallica and Mark Cuban, you better believe I'm dying to know who the show will bring in next season.

There has already been one official announcement regarding casting for Season 3. Asia Kate Dillon, who plays nonbinary Axe Capital intern Taylor, has been upped to series regular for Season 3, according to Deadline. Expect Taylor's smarts to blow you away some more next season.

Maggie Siff, who plays Wendy Rhoades, has an idea of where she'd like to see her character go in Season 3. "Last season when you met her, she had a lot of swagger because I think she was still kind of innocent. There wasn't all of the quandary that sort of tears her apart, both in her marriage and in the workplace. And so in this season, you've seen her sort of spread out and examine her conscience, and the character has felt a little more introspective and a little heavier to me. And I think that's adding some really interesting depth to her," Siff said during a recent interview with CNNMoney. "But I want to see her get some of her swagger back, I guess. It has to take the right shape and it has to incorporate some of these other things that have happened. I want to see her strut her stuff."

Here's hoping that Wendy and Billions as a whole have as much swagger as ever when it returns for Season 3.

More like this
Netflix Shut Down 'Bridgerton' S3 Rumours About A “Very Dark” Storyline
By Bustle
'Succession' Season 4 Will Be An "Absolute Banger" According To Cousin Greg
By Bustle Staff
'Ted Lasso' Season 3 Might Be Its Last
By Zosha Millman and Grace Wehniainen
Everything To Know About A Potential 'Lockwood & Co.' Season 2
By Gretchen Smail
Get Even More From Bustle — Sign Up For The Newsletter
From hair trends to relationship advice, our daily newsletter has everything you need to sound like a person who’s on TikTok, even if you aren’t.