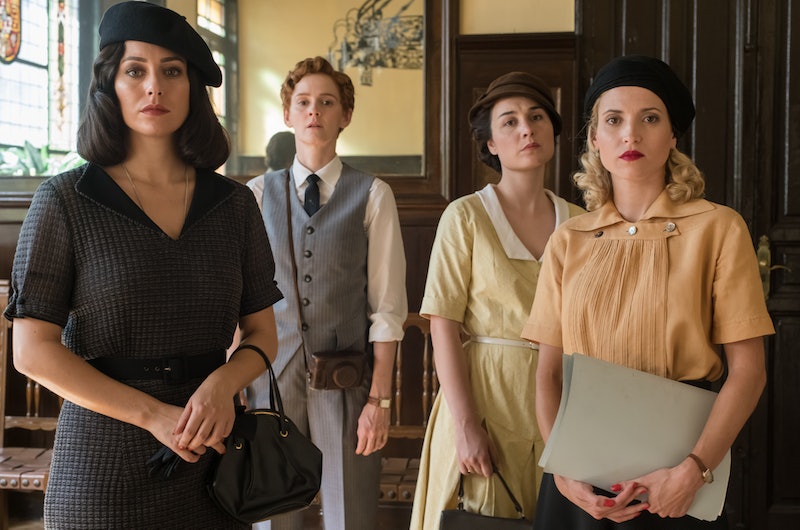 Valentine's Day marks the return of Netflix's Spanish period drama Cable Girls (Las Chicas del Cable), and it's sure to be a bittersweet premiere. Though the show built up a dedicated fanbase for five seasons — an impressive run considering how often women-centric shows on Netflix are cancelled all too soon — Cable Girls will not return for Season 6. Instead, Season 5 will be split into two parts, with Part 1 debuting on Feb. 14 and Part 2 later in the year.

When we last left off with Cable Girls, Lidia and her friends banded together to break Oscar out of jail after he took the fall for the murder of Carlota's political rival, Gregorio Diaz. Though they succeeded in rescuing Oscar, their jailbreak had a heartbreaking consequence: Ángeles was shot and killed while escaping.

This tragic death undeniably fractures the group. In Season 4's final episode, Lidia leaves Carlos and sets out for America with Francisco and Eva, her daughter with Carlos. Carlota and Oscar travel to Paris where they can be together. Marga starts her own accounting company and attempts to repair her marriage with Pablo.

According to the trailer, Season 5 picks up seven years after the events of Season 4, taking place between 1936 and 1939. Lidia and Francisco return to Spain in search of Sofia, Ángeles' daughter, who joined the army to fight in the war. "I came to take her back," Lidia tells Marga. "Sofia lost her loved ones too soon, but she was never alone. She had us."

A civil war raging adds an extra layer of complication that Cable Girls has never dealt with before. With the death of Ángeles and Spain turning into a war zone, it feels like none of the characters are safe anymore. Truly anything can happen in the final season, and some fans took to Reddit to express their hopes and concerns for Season 5.

Who will Lidia end up with?

The love triangle between Carlos, Lidia, and Francisco is one of the major draws of the show, and the Season 5 trailer teases even more drama between the three. Even though Francisco is introduced in the pilot episode as Lidia's true love, she always somehow falls back into Carlos' arms, with the two even raising a daughter together. Will Lidia finally choose the man she wants to be with in Season 5?

Miguel Pascual won fans over as Carlota's boyfriend who was willing to explore polyamory with her once he found out she was attracted to Oscar. Miguel begins to feel left out once he notices Carlota and Oscar enjoy spending more time together though, and after a depressing turn to drug use, Cable Girls simply phases Miguel out. Though the Carlota and Oscar relationship, as well as Oscar's journey as a trans man, are both engaging and important plot lines, fans still want to know what Miguel is up to in Season 5, regardless.

Did Lidia bring her back with her to Spain — very inadvisable with the war — or leave her in someone's care in New York?

What happened to all the steamy scenes?

Cable Girls is really a soap opera, but last season toned down on the more risqué aspects of the show. Will this season bring back some of the sex and romance that fans felt last season lacked?

Will anyone else die?

It's a tough question to ask, but worth considering when there's a war going on, and the trailer shows scenes of bombed and destroyed buildings. Fans will just have to cross their fingers that the remaining protagonists finally get their happy endings.