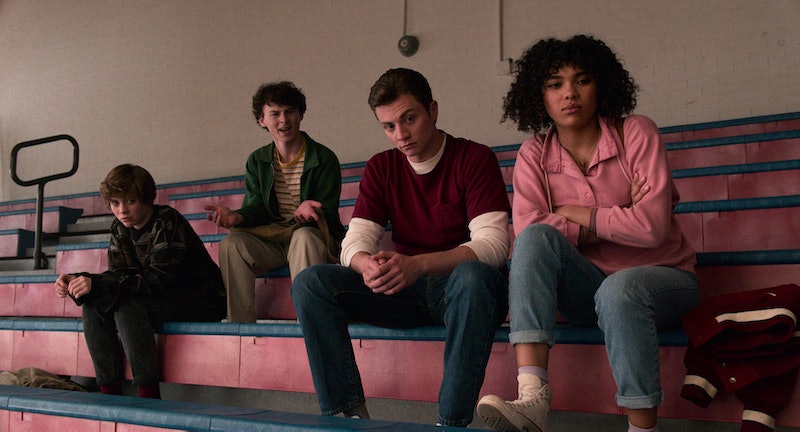 With Syd wearing chunky sweaters and Stanley donning a Duckie from Pretty in Pink-esque vintage blue suit, it seems obvious that I Am Not Okay With This is taking place sometime in the past. When it comes to teen Netflix shows though, the aesthetic doesn't always suggest the right time period. Sex Education is the best example of this, where each of Otis and his friends wear the loud prints and leather outfits reminiscent of the '80s, all while texting on iPhones and listening to Apple AirPods.

It's usually technology that ends up being the dead giveaway, but I Am Not Okay With This plays around with this as well. For example, Stanley exclaims that VHS tapes are "the best platform there is" and that he can't stand LaserDiscs, which were created in 1978. And yet when Syd blasts all the snacks in the convenience store, you can see chips, Mountain Dew, and Coca-Cola with their present day labelings. And while Syd and Stanley look very retro, Dina has a more modern day aesthetic.

"I Am Not Okay With This is full of 1980s music cues, both soundtrack and diegetic, to the extent that I had to double back and make sure it wasn’t a period piece," critic James Poniewozik wrote for The New York Times. "It is not; it just loves the ’80s."

You see this love through the myriad of film references. The way Syd narrates her "Dear Diary" monologues is similar to what Winona Ryder does in the 1988 Heathers movie. Stanley is very obviously a riff off Duckie from John Hughes' 1986 romance film Pretty in Pink, not just because of his vintage wear and quirky, fast-talking persona, but because he ultimately has to accept he's second fiddle when it comes to being the female protagonist's love interest.

Halfway through the series there's also an episode that mirrors Hughes' 1985 Breakfast Club, with Syd and four of her classmates getting stuck together in detention. Each of the characters even dress similarly to their Breakfast Club archetypes, and they have to hatch an elaborate plan to trick their principal and break into his office. Finally, the show remixes the tragic and depressing comic book ending by paying homage to the 1976 horror film Carrie: Syd gets her revenge on the cruel jock classmate using her telekinetic powers, and her prom dress ends up covered in blood.

In speaking to Syfy, director Jonathan Entwistle explained that the aesthetic comes directly from Charles Forsman's comic of the same name. Entwistle said that Forsman has "this '80s horror movie obsession that he has is definitely woven into this indie movie of a story" for I Am Not Okay With This. While in the graphic novel this homage translates into Syd's punk-rock clothing and the overall foreboding tone of the comic, in the show, Entwistle pays homage by packing the show full of pop culture references. While that may lead folks to call it derivative, Stranger Things did the exact same thing to great success. In the end, looking for all the easter eggs in I Am Not Okay With This ends up being as fun as it is to watch Syd unleash all her powers.