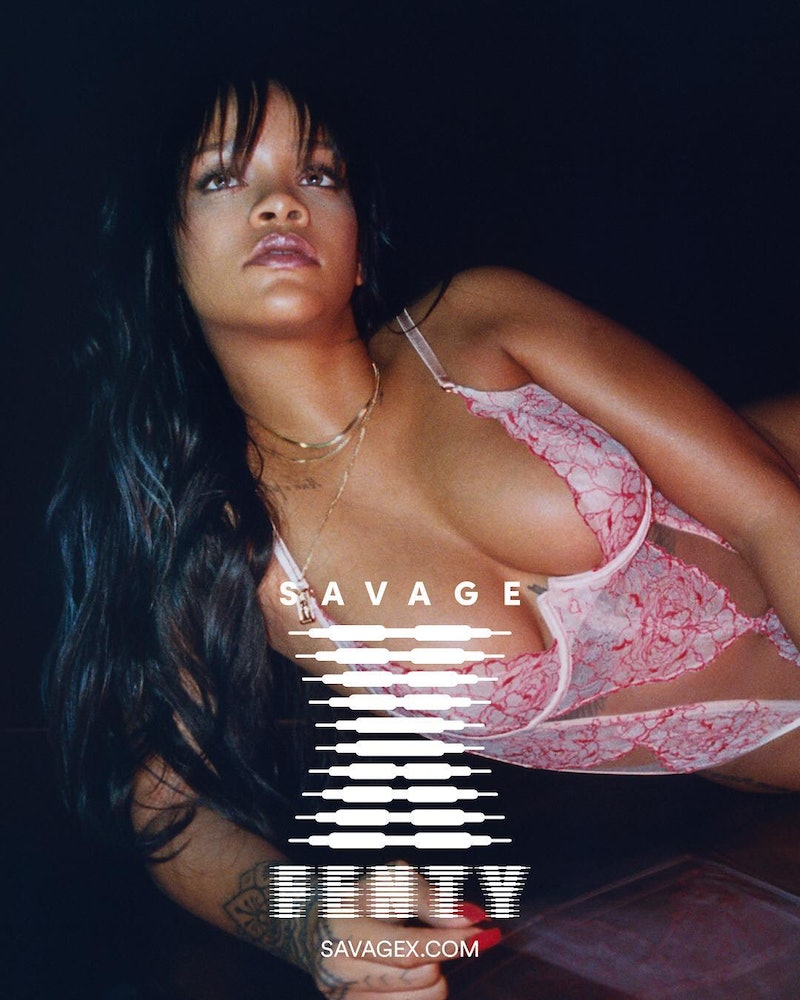 In case you hadn't heard, Rihanna can do everything. From killer music to starring in Ocean's 8, she's got the entertainment industry covered. That's not all, though. Fenty Beauty was one of 2017 most's talked about beauty launches, and now, Rihanna's Savage x Fenty lingerie line is coming her fans' way. The line may still be a bit mysterious, but slowly, Rihanna is releasing details and that includes the launch date.

According to an image posted to the Savage x Fenty Instagram account, the lingerie will officially be available online beginning May 11. As for where, the post revealed that it could be sold exclusively online at SavageX.com. As for whether it will be in stores eventually, those details may emerge later. After all, when Fenty Beauty launched, it went big and landed directly in Sephora. There's always the chance the online-exclusive brand could come to stores.

So far, there haven't been many details about what the line will actually look like. The biggest glimpse so far comes from the same post as the launch date. Rihanna is wear what seems to be a gorgeous red floral teddy with cutouts along the stomach. Other than that, there have only been a few glimpses of the line.

One thing that has been revealed? The brand will more than likely carry plus sizing. Once you sign up for notifications regarding the launch at the Savage x Fenty website, you're directed to a page which asks for your bra and panty size. While the cup size only reaches DD (despite many women having much larger breasts), the brand size goes to a 44. As for the panties, you can choose up to size 3x leading to the belief that the line will, in fact, be plus inclusive.

If you're wondering if fans are excited for Rihanna's latest venture, the answers appears to be a resounding yes based on social media. The Navy (the name for Rihanna's fans) is sounding off on Twitter about their plans to shop the collection, and honestly, the reactions are kind of hilarious.

People are loving the fact that while the cup size could use some improvements, the brand does appear to be size inclusive overall, including both plus and straight sizing.

Plus, it's hard to forget that Rihanna's Fenty Beauty did just drop an all over body luminizer in Fenty Beauty. The timing is just too perfect, right? Rocking Fenty Body Lava while rocking Savage x Fenty just seems like a given at this point.

Before images of the line have even been released, fans know that it's going to make them feel like a million dollars, even if they're just rocking it at home.

Don't wear you don't need a partner to wear the lingerie. Wear it because it makes you feel amazing!

Look in the mirror and praise your Savage x Fenty covered body.

If you really want to go to the next level, snag all of Rihanna's babies. From Fenty makeup to body lava to Fenty x Puma and Fenty lingerie, you can be decked out in the star now, and who doesn't want to be totally Rihanna approved?

If you want to be one of the first to get your hands on Savage x Fenty, head over to the website now to sign up for notifications. According to the brand's Instagram, the pieces can be yours as soon as May 11 by shopping exclusively at the Savage x Fenty website. While designs haven't been totally revealed, this is Rihanna, after all. Anything she touches basically turns to gold, just look at Trophy Wife.