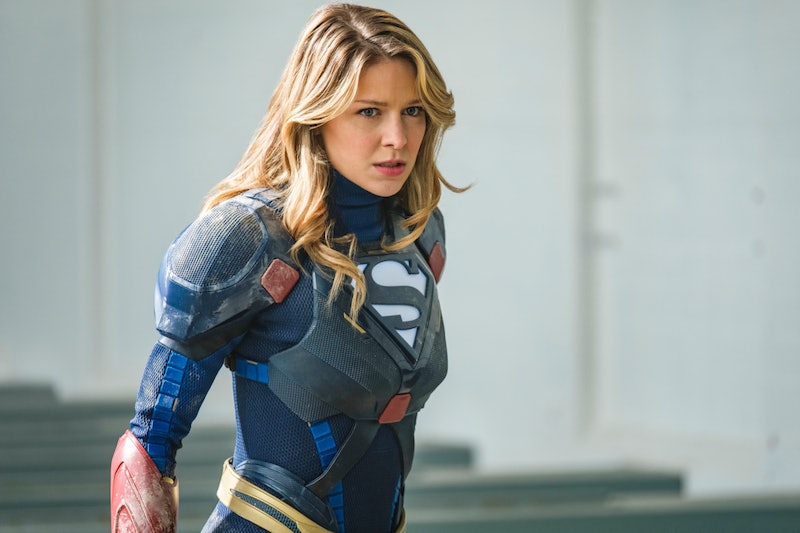 After perhaps its most intense and confrontational season yet, Supergirl will bring its titular heroine and her nemesis, Lex Luthor, face-to-face in the White House during the May 19 finale. It's Kara's big chance to finally take down the nefarious supervillain, and hopefully, she'll come out on top. But whatever goes down, fans can expect it to set up the story for Supergirl's Season 5 return, as producers have said they plan to continue the themes laid out in Season 4.

According to the official description for the upcoming finale, per Coming Soon, Kara will turn to the "power of the press" in order help stop Luther. This speaks to the show's attempt to get back to its roots and once again tackle timely, real world issues alongside all of its evil-busting action.

"We wanted to ground the show a little more than it had been," executive producer Robert Rovner told The Hollywood Reporter in October ahead of the Season 4 premiere. "Last year was all about battling Reign and going into outer space and Argo, so we wanted to bring it back down to Earth so we could concentrate on Kara's dual life as a reporter and the superhero and dig back into more of the real-world stories that we had tackled in season two."

And that they did. All in the matter of one season, the show grappled with an alien invasion (intentionally and poignantly led by the chanting of the words "Earth first!"), a confrontation with Russia (via Lex's Supergirl clone, the Red Daughter), and the introduction of TV's first-ever transgender superhero, Dreamer (aka Nia Nal), among other plot points that reflect today's sociopolitical climate.

"Our main theme is, which is stronger, hope vs. fear?" Rovner continued to THR. "We were excited to bring on a trans superhero and a character that could represent the trans community because the show should reflect back the people that are watching it and the world we live in. It was very important for us to cast a trans actress to embody that character and to work with her and the trans community and the LGBTQ community to make sure we were making her authentic and real."

And they plan to carry on those themes in Season 5. "We want to continue to tell stories that reflect the world we're living in and have Supergirl be a beacon of hope of strength and help guide us any way she can so she can inspire the best in people," Rovner said.

As for when fans will get to see this put into action, an official Season 5 premiere date has not yet been announced. However, all four seasons thus far have premiered sometime in October, so Supergirl should be back this fall. The only real variable will be if it hits toward the beginning or end of the month.

The Season 4 trailer was released at San Diego Comic-Con in July last year, per TV Insider, so there should be more news within the next few months.