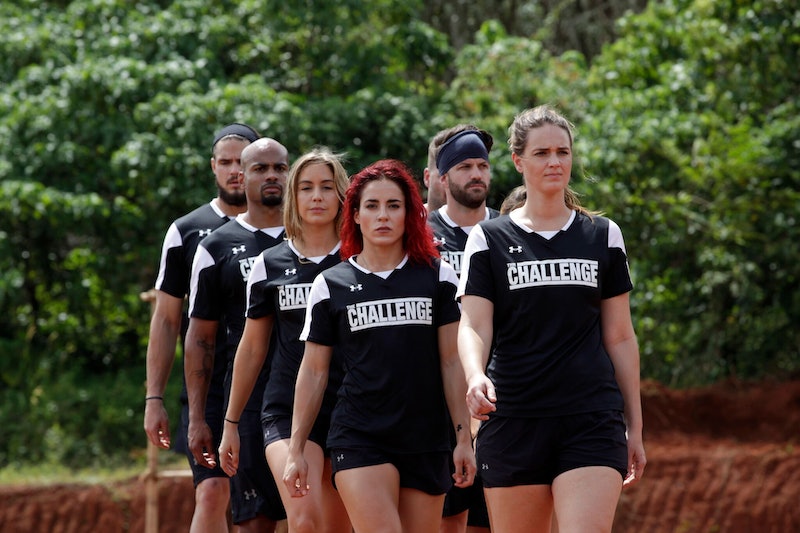 Ready or not, here it comes! The season finale of The Challenge: Invasion Of The Champions is coming at you on Tuesday, May 9 at 9 p.m. ET on MTV, and that means it's almost time to find out whether Underdogs Ashley M., Cory, Nelson, or Nicole will take home the $350,000 grand prize, or if it will it be one of the Champs, CT or Camila. No matter what happens during The Challenge season finale, now is not the time to be sad that this season is almost over. As the 29th season of this reality competition series, the hope is strong that The Challenge will return for Season 30.

However, MTV has not yet officially announced whether or not there will be more of The Challenge in the future, so all you can do at this point is hope that it comes back. Still, given the fact that The Challenge is such a long-running, beloved, and buzzy series, coupled with the fact that the show's ratings have remained fairly consistent from season to season, according to data from the Nielsen Company, as reported by TV By The Numbers, I would be surprised if MTV didn't bring it back for another installment.

Without an official renewal from MTV, that means there's no telling when the new season of The Challenge will premiere if it does get picked up for another installment. It'd even be difficult to try and guess based on when new seasons of the series have premiered in the past because they have bowed at all different times of the year in the show's 29 seasons so far.

But have no fear, because there is definitely more of The Challenge on the way after the Season 29 finale. For starters, the cast of The Challenge: Invasion Of The Champions will come together again to revisit the highs and lows of the season at the reunion, which will be hosted by former Challenge contestant and current pro wrestler Mike "The Miz" Mizanin. This sure-to-be explosive walk down memory lane begins Tuesday, May 16 at 8 p.m. ET on MTV.

After the Season 29 reunion, you might want to stick around MTV, because a special, new Challenge series will premiere. That would be The Challenge: Champs Vs. Pros, which debuts on Tuesday, May 16 at 9 p.m. ET on MTV. Hosted by NFL star Victor Cruz, Champs Vs. Pros will pit some of the strongest competitors The Challenge franchise has ever seen against pro athletes. Each episode of this six-week event series will focus on a different strength: agility, ingenuity, brawn, brains, endurance, and guts. The last remaining male and female contestants will battle it out for the chance to win $50,000 for their charity of choice.

The Challenge champions competing in Champs Vs. Pros are said to be announced following the season finale of Invasion Of The Champions Tuesday night, according to MTV News. However, the below preview of the new series gives a sneak peek of some of The Challenge favorites we can expect to compete, including Johnny Bananas, CT, and Camila.

So Champs Vs. Pros should be just enough of an amuse bouche to tide you over until there's (hopefully) more new Challenge action in your life in the future.

More like this
'The Bachelor' 2023 Schedule Differs From Last Season In 1 Key Way
By Grace Wehniainen
Everything To Know About 'The Real Housewives Ultimate Girls Trip' Season 4
By Jake Viswanath
Everything To Know About 'RHONJ' Season 13
By Brad Witter and Jake Viswanath
This ‘Bachelor’ Spoiler Teases The Dramatic Self-Elimination Of A Fan Favorite
By Grace Wehniainen
Get Even More From Bustle — Sign Up For The Newsletter
From hair trends to relationship advice, our daily newsletter has everything you need to sound like a person who’s on TikTok, even if you aren’t.