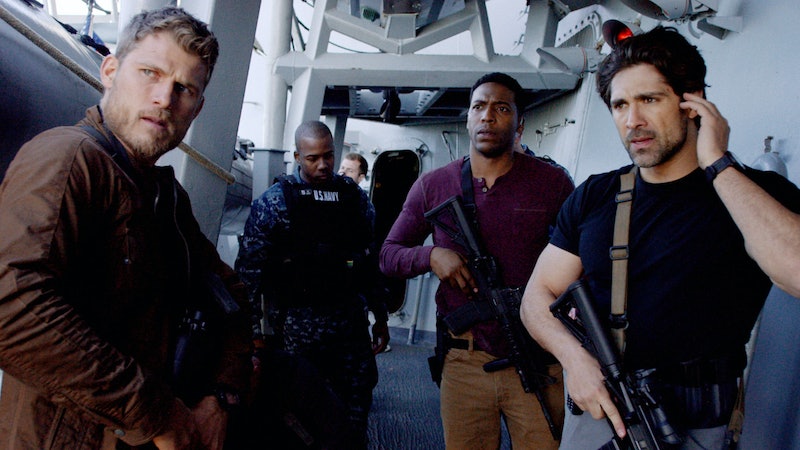 The Last Ship has spent four seasons dealing with the aftermath of The Red Flu, and it looks like things could go bad in a major way in the Oct. 8 Season 4 finale. Fans worried that the season may end on a cliffhanger have little need to worry, as they'll be getting resolution soon. Season 5 of The Last Ship will be airing in summer of 2018, as confirmed by Deadline, but that fifth season may be the series' last.

"We shot two seasons simultaneously, the fourth is currently on the air and the fifth will return next summer. We greenlit the fifth with the idea that it could be the final season, however it’s far too early to make that determination."

Rumors first sprouted up when Travis Van Winkle, who plays Danny Green on The Last Ship, posted a note on Instagram claiming that production had finished on Season 5, but later deleted it. According to TV Line, the Instagram post Green referred to the end of Season 5 as a "series wrap," and reminisced on the history of the series — which makes it sound like Season 5 is going to bring the show to an end. Winkle may have preemptively revealed that The Last Ship was coming to an end or possibly spoiled the fate of Danny Green.

The Instagram post in question is the largest piece of evidence that Season 5 may be the show's last, but in the previously referenced article, Deadline also hints at rumors that star Eric Dane is available for other work and that Season 5 is not ending in a cliffhanger, meaning that even if The Last Ship doesn't come back, it will have the opportunity to create a proper ending for the show.

It may seem suspicious that TNT had the confidence to sign off on The Last Ship Season 5 before Season 3 even finished and is not extending that same confidence to The Last Ship Season 6, but worried fans would do well to remember that it's still very early in the television cycle to hear news about a sixth season. There's a chance that talent contracts may have expired after Season 5 and need to be renegotiated. Or perhaps the showrunners are looking for a solid story reason to continue the series.

If The Last Ship is coming to an end, at least those that work on the show had plenty of time to ensure that the series would come to a satisfying conclusion. With Season 5 already finished and no sign of Season 6 on the horizon, it really does seem like it the next season of The Last Ship will be their last adventure. Of course — if Season 5 is a smash hit, it seems that TNT still has the option of bringing the show back if enough fans demand it.

More like this
'Elite' Season 6 Is Arriving Sooner Than You Think
By Gretchen Smail and Grace Wehniainen
The ‘You’ Season 4 First Look Shows Joe’s New Identity And Potential Victims
By Bustle Editors
'The White Lotus' Season 2 Finally Has A Release Date
By Bustle Editors
If 'Entergalactic' Season 2 Happens, You Could Get A New Kid Cudi Album
By Kadin Burnett
Get Even More From Bustle — Sign Up For The Newsletter