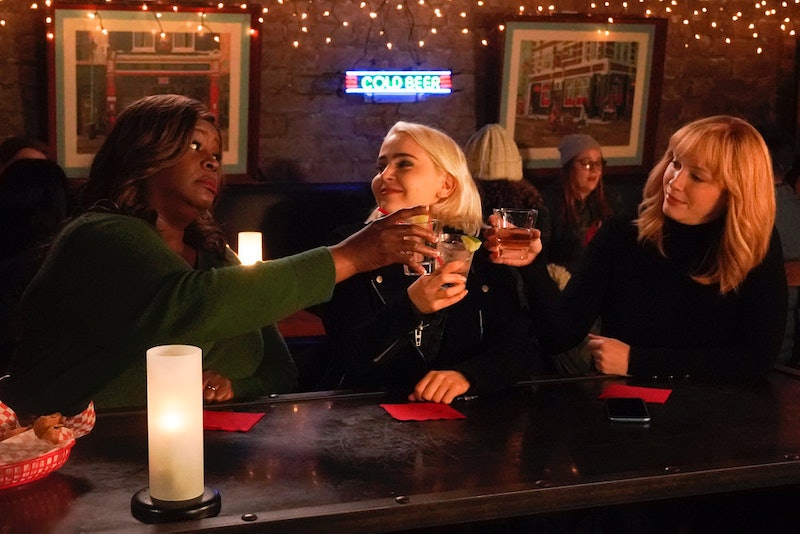 Because of its propensity for cliffhangers, fans should be relieved to know that Good Girls is returning for Season 3. TV Line reported in April that NBC had renewed the show. So whatever inevitable twists arise in the Season 2 finale, rest assured you won't be left hanging for too long.

This is particularly comforting considering that the renewal was somewhat surprising — compared to NBC's other shows, Good Girls hadn't actually been doing that well. The second season has averaged 2.3 million viewers, making it the 16th most popular scripted show on NBC. But TV Line reported that the show's digital numbers were consistently high, so NBC obviously saw value in bringing this smart and funny series back for more.

According to Deadline, Good Girls received a bump in popularity after NBC put the show on Netflix. If and when Season 2 hits the streaming site, it will likely build even more excitement for the upcoming third season. Retta, who plays Ruby on the show, tweeted in January that Netflix had started streaming Good Girls. So it's possible that Season 2 will hit the streaming site next winter ahead of Season 3.

In the past, Good Girls seasons have premiered about a year apart in February 2018 and March 2019. Fans can likely expect to see a third season premiering in February or March of 2020, in that case. And when the show returns, it's going to have a lot of explaining to do. Among some of the cliffhangers that fans are going to want answered from the finale, there are also some overarching questions that need to be dealt with. For example, what is Beth and Rio's deal going to be romantically? Especially since Beth and Dean seem to be trying to be more civil — at least for the children.

Christina Hendricks told Awards Daily that, of late, their marriage may be coming back together. "Somehow, this is oddly bringing them back together where they're checking in with each other. They're trying to protect each other," she said. Hendricks added that she doesn't think Beth will quit the crime business any time soon, though. It may continue to threaten all she holds dear, but Beth can't seem to get out while she's even marginally ahead. "I think they always think that it's one more and then they're done. I think it’s this constant struggle of trying to live a normal life but also knowing what else is out there. Once you know, what do you do?" Hendricks said.

Among the other things the show needs to address soon: Is Stan still going to go to prison? (Please no.) Is Mary Pat going to return to wreak more havoc on their lives? (Also please no.) Can Noah and Annie really make things work considering all the lies he's told her? And can Agent Turner, like, get a new hobby and focus on some other criminals for a change? Hopefully all these questions and more are tackled when the show returns next year.

More like this
The ‘Kevin Can F**k Himself’ Season 2 Finale Twist Is A Full Circle Moment
By Grace Wehniainen
'Grey's Anatomy's New Intern Got Advice From Dr. Bailey Herself
By Grace Wehniainen
Nicola Coughlan Addresses 'Bridgerton' Season 3 Backlash
By Sam Ramsden
The 'Heartstopper' Cast Were Spotted Filming In A Major City
By Nola Ojomu and Sam Ramsden
Get Even More From Bustle — Sign Up For The Newsletter