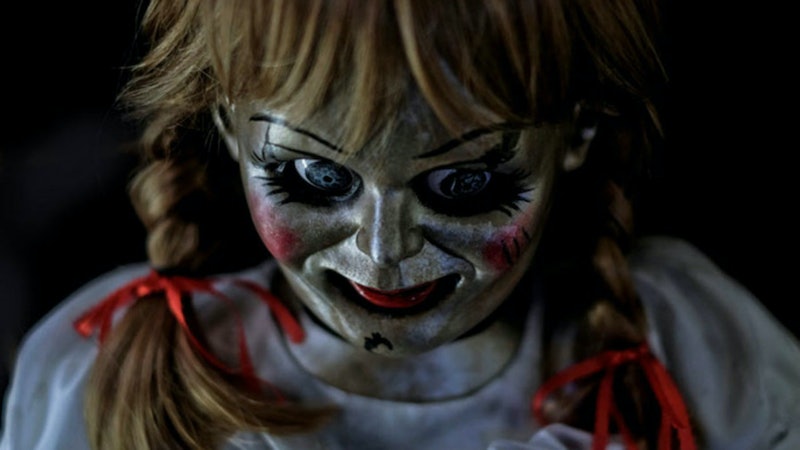 Being outside is nice and all that. But summer tends to be a pretty great time in terms of movie releases. So you can fill up your boots in your local cinema on those not-so sunny days. Even with the types of scary AF movies that make you jump out of your skin every three minutes and then haunt your dreams. The likes of the Annabelle series for example. So when is Annabelle Comes Home out in the UK? Because I am totally ready for a spooky summer.

The good news is that this summer is about to get deliciously creepy but the bad news is you will have to wait a little while. Not too long though, as the film is out in the UK on June 28. Lit.

It's the third in the series of Annabelle films, from the mind of Gary Dauberman. Who is this Annabelle, I hear you ask? Well, she's only a flipping haunted/possessed/creepy AF doll. AKA the thing of complete nightmares and proof that being scared of dolls makes total sense. Which is even wilder when you hear that Annabelle is based on a true story. Yes, you heard me. A true effing story.

Before their deaths, Ed and Lorraine Warren claimed to be top experts in demonology and the occult. So much so that they would be called upon to help people when they were experiencing a haunting or possession. As The Mirror reports, this is how they came to know Annabelle the doll. The doll was owned by a little girl and it supposedly began to possess people around it and cause terrifying mayhem. So much so that the Warrens thought the only way to deal with it was to lock it up in a glass case and seal it with a load of prayers. Prayers they claimed stoped the evil doll from, well, doing evil. According to The Mirror, t still remans in the Warrens' Occult Museum in Monroe, Connecticut. According to The Mirror, Lorraine once said that despite appearances, this doll is super creepy. "Looks are deceiving. It's not what the doll looks like that makes it scary; it is what has been infused within the doll: evil," she claimed.

So the movies are based on this story. Annabelle and Annabelle: Creation proved to be complete smash hits and the third one looks like it is going to be just as creepy as the previous instalments.

As the name suggests, this film will see the Warrens desperately trying to get the doll home, safe, to stop it from wreaking havoc, and get it back to their special museum and lock it up safe. But as if the movie version of Annabelle will let that happen. Oh, hell no. Instead she goes on ahead and wakes up all the evil spirits in the flipping museum and they all decide to get up to some serious bad behaviour. And when I say bad behaviour, I mean targeting the Warrens' ten-year-old daughter, Judy, and her friends. Yikes.

The film is likely to make you cry like a little baby so best not watch this on a first date.