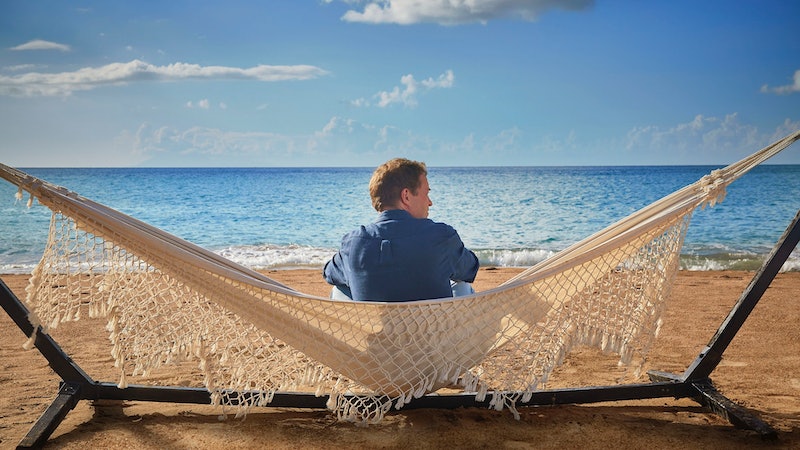 The eighth series of the BBC drama Death in Paradise wrapped up back in February, and in the series finale, viewers witnessed the return of actor Grace Stone, who reprised her role as Siobhan Mooney. Fans of the British-French production must now wait patiently for the show's next run. However, filming on the next series has already officially resumed. So when is Death in Paradise series nine on? And which characters can we expect to welcome back? Here's everything we know so far.

An official start date for Death in Paradise series nine is yet to be announced. I have reached out to the BBC for comment, and will update with any new information once it becomes available.

However, according to the Express, it's likely that Death in Paradise will return sometime around January 2020. As reported by Digital Spy, filming for the upcoming ninth series is officially underway, and is set to welcome back Tobi Bakare as Officer JP Hooper, Shyko Amos as Officer Ruby Patterson, Don Warrington as Commissioner Selwyn Patterson, and Elizabeth Bourgine as Catherine Bordey. Joining the series nine cast as the Honoré Police team newbie is Aude Legastelois as DS Madeleine Dumas, while Ardal O'Hanlon will return to his role of DI Jack Mooney.

According to the Express, Death in Paradise Executive Producer Tim Key has previously commented on the upcoming ninth season. He said:

"We're thrilled to be back in Guadeloupe with our fantastic cast and crew getting to work on more ingenious murder mysteries in the Caribbean sun. We can’t wait for the audience to see what we’ve got in store for series nine — there are some big surprises coming. It’s an honour to be part of a show which is so loved by its audience and the decision to commission two series shows how much it is valued by the BBC."

The long-running police detective drama is filmed on the French-Caribbean island of Guadeloup, reports the BBC, and the next series promises to keep audiences hooked with "cunningly clever plot twists," and a "star-studded array of guest cast." The BBC Drama Commissioning Editor Tommy Bulfin has also expressed his excitement surrounding the new series. He said: "We are delighted to announce that Death in Paradise is coming back to BBC One. The show is a jewel in our roster of top drama and we are thrilled that it’s returning."

With all the anticipation surrounding the next instalment of the hit series, it's easy to forget that only recently the Death in Paradise creator had expressed concerns surrounding the future of the show due to Brexit. The show's writer and creator, Robert Thorogood, pointed out that Guadeloupe is in fact an EU territory — meaning any future filming could prove difficult. He said, "Guadeloupe is an overseas territory of France, so it’s part of the EU, which makes it really easy to film there. If we left the single market, it could make things much harder for us. So, like the rest of the UK, we’re just going to have to wait and see what happens after Brexit." Thankfully it seems season nine is unaffected, but there's been no word about what will happen after that. We'll just have to watch this space.

Death in Paradise is expected to return in 2020.