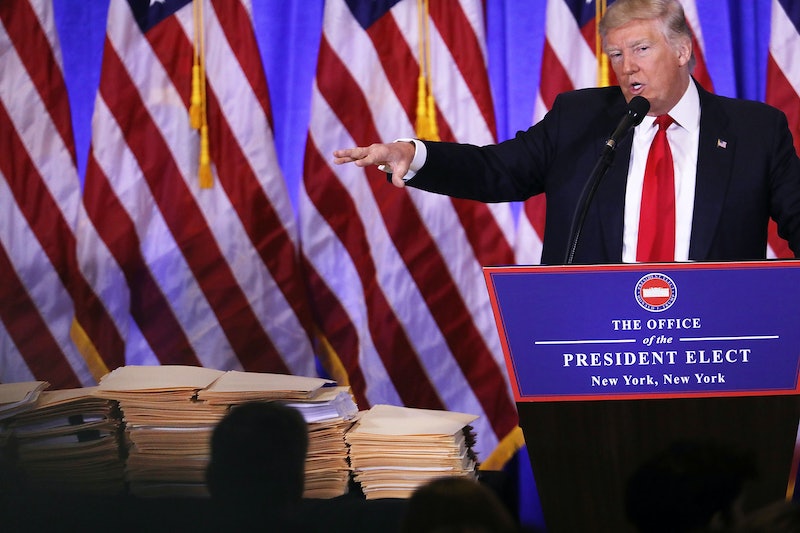 In his first press conference as president-elect, Donald Trump stated on Wednesday that he has not yet released his tax returns because he is currently being audited by the IRS. Furthermore, he declared that Americans do not care about seeing his tax returns, since he won the election in November. It's been said many times that the audit doesn't prevent him from disclosing his tax forms. Plus, there's much evidence to suggest that many Americans truly do want to see Trump release his tax returns. Still, the question that remains is this: When will Trump's IRS audit be over?

During the Republican presidential debate on Feb. 25, 2016, Trump stated that he could not release his tax returns because he was under a "routine audit" by the IRS, saying he would disclose the forms "as soon as the audit is done." His claims were challenged by the next day, when IRS Commissioner John Koskinen appeared on C-SPAN's Newsmakers and said that an audit doesn't prevent anyone from releasing their tax documents to the public. (In fact, Richard Nixon did just that back in 1973.)

In March, as many were questioning whether Trump was being audited at all, his campaign released a letter to the public confirming that the IRS's audit of Trump's tax returns from 2009 onward was ongoing. From then on, everyone from Hillary Clinton to the media to Trump's fellow GOP members doubled down on trying to get him to give in, all to no avail. The election came and went, and Trump won, even though he was the first presidential candidate in 40 years to keep his tax returns a secret from the American public. And the search for the returns and the end of the audit continues.

As of yet, no one from either the IRS or the Trump team has given a timeline for the audit or a date for when it is expected to be over. And considering Trump claims to control over 500 companies, it's understandable that an audit of such size would take quite some time. According to the IRS website, there is no set time for how long audits can take.

Back in February, Forbes published an article suggesting that the type of audit required of Trump's assets could take years, though they don't mention just how long. No doubt, "they'll be released sometime in the next few years" isn't the answer many politicians, journalists, and everyday Americans alike want to hear. And even if the audit Trump claims he's under were to end, he likely wouldn't be rushing to let everyone know anyways.

The best bet may be to try to get Trump to release his 2002-2008 tax returns, the audit of which was closed early in 2016. Though Trump has already said he will not release those either, because "they're all linked." Overall, Trump's tax returns could remain a mystery for a very long time.

Even so, that doesn't mean American citizens and journalists should give up on insisting to see them. Indeed, Trump's obscured foreign interests are a matter of national security and learning more about them should never be abandoned.