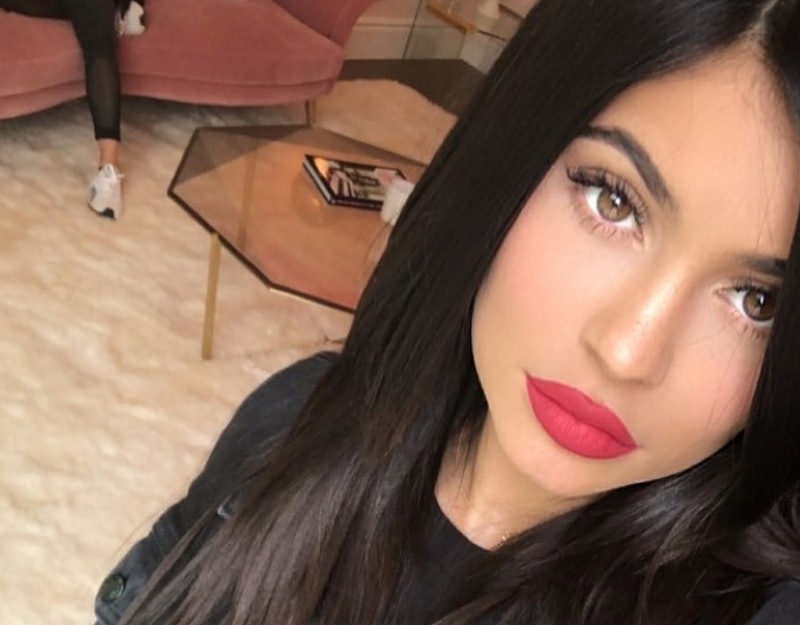 Kylie Cosmetics has named many Lip Kits after people close to brand creator Kylie Jenner. There's Koko, named after Khloe, and Kristen, which nods to momager Kris Jenner. Remember the vampy plum shade Kourt K or the rich red inspired by grandma Mary Jo? Kylie Cosmetics is dropping a new, pinky red shade that's unlike any of the other pink or red mattes in the brand's extensive repertoire. It's named Victoria — likely after a very special person in Jenner's life. Who's dat?

Her personal assistant Victoria Villarroel, that's who! Jenner didn't specifically say that it's named after her assistant in the shade's Instagram reveal but it's pretty much a foregone conclusion.

While we don't do Vic's job, and therefore can only guess what her daily tasks consist of, we're pretty sure being Jenner's right hand woman is a big, busy job with plenty of perks. So it's a super sweet gesture for her boss to christen a matte liquid lippie, which is the super successful brand's hero product, after her.

Of course bonuses are nice and Villarroel probably gets those. But to have a pink x red lipstick that bears her name is beyond awesome. Never underestimate the value of recognition. A simple gesture such as this actually shows a lot about who Jenner is as a boss.

Here it is on lips IRL. It's a soft but statement shade — with some serious pink tones. While there are a lot of color options in the overall Lip Kit range, this one stands out from those in the same family. It also pops against Jenner's extra long and dark locks.

Victoria will come in the Lip Kit iteration and formula — that means it's accompanied by a matching liner and it's not the lighter Velvet texture. You can see those details on the box.

And in this story! We can't help but wonder if and when Kylie will eventually christen a Lip Kit after her big sister Kendall Jenner. We're also curious if she will do a full range with her BFF Jordyn Woods, who is often the tester for all newly launching KLK shades. Fans mused about such matters in the comments of the posts sharing the new shade. Kendall is the only member of Jenner's inner circle who hasn't collabed with Kylie Cosmetics. Perhaps it will happen some day. But for now, Kendall is noticeably absent from her little sister's assortment of products.

But back to Victoria, which deserves your undivided attention. It will arrive on Thursday, May 31. Kylie drops usually happen at 12 p.m. or 3 p.m. PT, so this one should be an afternoon delight for makeup fans.

Jenner even held up a tube of Boss, a rich, blue red from the Kris Jenner Mother's Day "Momager" makeup collection, next to Victoria to further demonstrate the difference between the hues. Clearly, Victoria has much more of a berry tone. If you are not ready to make the leap and wear a bright, statement, or Old Hollywood red, you can ease into dramatic and glam matte lip territory with the Victoria Lip Kit.

In case you are further curious about the woman who is likely the inspo for this shade, Elite Daily reported that Victoria has been working with the Jenner family since 2012. She was promoted to the position of Kylie's assistant in 2015. She once described the job as "work but fun," which sounds like a great situation to be in.

We all have to earn a living any way we can. When we introduce fun into the equation and actually enjoy our gigs, it's a beautiful thing. But when our bosses name a makeup product after us? Well, that's priceless.

Shop the shade next Thursday, May 31.